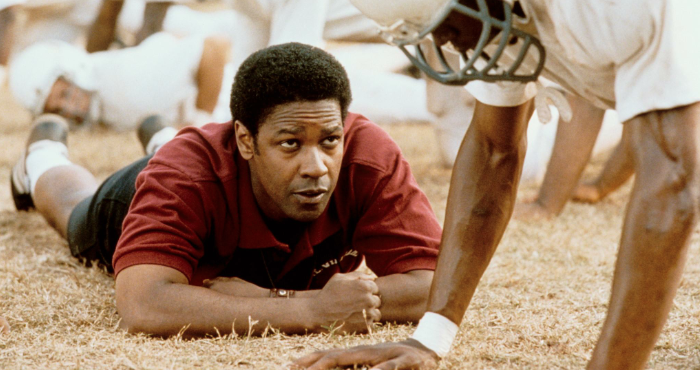 Top 10 Sports Films Of All Time

It’s exactly that time of year. Major League Baseball is nearing their postseason, both hockey and basketball are on the horizon, and with professional and college level football in full swing, it’s Fall and it’s sports season. And throughout cinema history, sports have been fodder for some of the most cliché underdog tales, as often as some of the most genuinely moving character studies. And what with Ron Howard’s racing drama Rush now in theaters with an expansion set for this weekend, it is time to shine a light on the ten best films that cinema has to offer with an athletic bent.

When it comes to documentary cinema, few things are as inherently engrossing to watch and portray on screen as athletics. Be it the legendary documentaries by Leni Riefenstahl (particularly Olympia) or even something like Jean Vigo’s breathtaking ode to swimmer Jean Taris (Jean Taris, Swimming Champion), sports have been fodder for non-fiction cinema since day one. And one of the most interesting takes on this type of film is from Kon Ichikawa. Entitled Tokyo Olympiad, the film looks at the 1964 Olympic games held in Tokyo, and is as bewilderingly stunning a meditation on the strength of the human form, with a style and beauty only Ichikawa could craft. Akira Kurosawa was originally slated to helm this picture, but (and may I say thankfully) Ichikawa swooped in and created a masterpiece that gets, in its 170 minute runtime, every emotion one can feel during an athletic event. It’s truly poetry in motion.

Based on Leonard Gardner’s novel (Gardner also penned the screenplay), John Huston took to the world of boxing to not only craft one of his most interesting late-period pictures, but also one of the best boxing dramas of all time. Blending, perfectly I may add, the idea of sports and noir (something seen as early as something like The Set-Up, an equally superb boxing noir) the film stars Stacy Keach as an aging boxer who meets, befriends and then breaks apart from a youngster he meets sparring played by Jeff Bridges. Featuring an ending as brazen and truly breathtaking as you’ll find on this list, Fat City is a kinetic body blow to any viewer that lays eyes on it. Chock full of great performances and style from a director still able to keep viewers on their toes, this is inarguably one of the great unsung gems in sports cinema history.

And now onto the boxing film everyone knows, and everyone should love. Coming from director Michael Mann, this Will Smith-starring biopic on the life of legendary “Bad, bad man” boxing icon Muhammad Ali is as good as the world would have you believe. As stylistically distilled a film as Mann has ever made, this vital biopic stands as one of the best biographical pieces of cinema ever made, with a towering performance by Smith who truly gives his career defining performance in this picture. With gorgeous photography and a supporting cast spearheaded by the likes of Jamie Foxx and even Mario Van Peebles, this is quite possibly one of the best films made in the 2000s.

Another unsung gem of a sports picture that, thankfully, has found second life thanks to the folks at The Criterion Collection. The first narrative feature film from kitchen-sink legend Lindsay Anderson, This Sporting Life tells the tale of a miner-turned-rugby-player who leads this definitive entry in the aforementioned “kitchen-sink-realism” genre that the UK gave the world. With two awe-inspiring turns from the pair of Richard Harris and Rachel Roberts, this energetic masterpiece of naturalistic filmmaking that hints at the world of documentary filmmaking that Anderson had come from prior in his career. It’s also one of the few films that set rugby as its backdrop, one of the most popular sports in nations not known as the United States of America. As vital today as it was 50 years ago (it hits the 50 year mark this year, actually), this film is a classic that many may not be all that familiar with.

Most of the films above, and many below, have and will be heart-wrenching dramas, but sliding in at number six is one of the funniest films ever made. Starring silent-comedy legend Harold Lloyd, The Freshman tells the tale of a college student who, in his attempts to become popular, tries out for and joins his school’s football team. One of his most successful films, the film teams him back up with his oft-collaborating directors Fred C. Newmeyer and Sam Taylor, in a film that seems to go out of its way to paint a picture of Lloyd as truly one of the most singular comedic talents of all time. Full of his patented charming and inventive gag sequences and a universal tale of a young freshman trying to find his way in a new world, this film is as cinematically singular as any of these films and has a heart most of them don’t even attempt to find.

Hi, my name is Josh Brunsting, and I still watch professional wrestling. Having grown up in the days of the Monday Night Wars and the WWE’s Attitude Era, many of the stars I grew up watching have since hit the backburner, if they are even still in any of the major promotions. What ends up being the final page in the life story of many of these true athletes (no matter how “fake” it very well is) is a life on the old timers circuit, fighting to keep your life afloat whilst equally taking drastic strides to hinder living a full one. Take Darren Aronofsky’s The Wrestler for example. More of a character study about a man simply trying to find admiration in this world, Aronofsky’s film is shockingly made, a dramatic step forward for the director of such esoteric pictures as Pi, and features a performance from star Mickey Rourke that is truly as definitive a dramatic turn as Robert DeNiro in Raging Bull. It’s a masterpiece of a film that seems to have been forgotten over the last few years.

Often times, sports films are fodder for nothing more than a run of the mill tale of a man, woman or group of men/women trying to overcome odds only to overcome them, with the world’s most rousing musical compositions behind them. However, some films take that cliché-ridden premise and truly run with it. And Remember The Titans is that film. From underrated journeyman filmmaker Boaz Yakin (his film Fresh is a work of genius) comes this film about a football team not only itself fighting against one another but against the racial prejudices found in Virginia in the early 1970s. With style, a cavalcade of great performances from names like Denzel Washington and a very young and very pretty Ryan Gosling, this film is sports cinema at its most heart-wrenching. Ostensibly a film of clichés, the real power in this film comes from Yakin’s direction and Gregory Allen Howard’s script that takes these clichés, amps them up to 11 (breaks the knob off, really) and embeds so much truth and warmth and universality into each character that it’s impossible not to be turned into a monstrous pile of tears during numerous sequences in this film.

And now things start to get a little bit straightforward. Almost unanimously named the greatest narrative sports film ever made, Martin Scorsese’s tour de force boxing drama Raging Bull slides into number three. Based on Jake LaMotta’s memoir comes this film which is every bit as powerful, every bit as haunting and every bit as breathlessly crafted as you have been led to believe. With arguably De Niro’s best performance found within this film (Taxi Driver fans need to sit down and really take this film in), the film is also in the discussion for best film from Scorsese, and it’s easily the best screenplay Paul Schrader has ever been a part of. The boxing sequences here are also breathtaking, taking on their own style, one that turns them into percussive breaks from what is otherwise a devastating and unforgettable character study.

There have been very few sporting events like “The Rumble In The Jungle” and there have been very few films like Leon Gast’s When We Were Kings. Looking at the legendary battle between then heavyweight champ Muhammad Ali and George Forman, the film looks at everything from the actual fight all the way to the music festival that came with it. With interviewees including the likes of Norman Mailer and Spike Lee (there’s a duo I’d want to see chit chat) the film may be best known for documenting Ali’s now legendary rope-a-dope technique that ultimately led to him stealing the fight from a gassed Foreman, but there is a treasure trove of depth here for those willing to dig into it. Ali’s refusal to be drafted into the Vietnam War looming over the film like the dictator Mobutu Sese Seko who’s Zaire hosted the event, this is one of the most dense and truly intellectually stimulating biopics ever made with sports as a focus.

But there’s one better, and it’s the best sports film ever made. From director Steve James, this tale of two children in Chicago and their separate paths through their schooling and basketball careers, Hoop Dreams is not only the best sports film ever made, but is inarguably the greatest documentary film ever committed to celluloid. Filmed over five years, the picture follows Arthur Agee and William Gates, two kids who hope to one day play professional basketball, but must first overcome odds ranging from academics to their very own surroundings. A truly definitive motion picture, the film is a timeless tale of two young men doing everything they can possible to follow their dreams. Inspiring, haunting and absolutely unforgettable, James’ film stands as not only his masterpiece (his most recent film, Head Games, may be the definitive look at concussions, nearly making this list as well) but it stands as a film that reaches deep down into its own heart to bring out emotions rarely felt during a feature film. As sad as it is utterly hopeful, this picture will have you smiling, crying, laughing and gasping at just about every turn. Calling it the best sports film ever made doesn’t do this picture justice. It’s one of the best films, genre be damned, ever put on screen.

(Before we end this, one short subject, for you to watch right this moment. ESPN released, a handful of years back, a short documentary looking at the life of one Scott Hall. Best known as the “bad guy,” Razor Ramon, and ultimately a focal part of the legendary WCW stable The NWO, Hall’s life has taken a Wrestler style downward turn, often being sighted as one of the major inspirations for that film. This short, which depicts yet another battle fought by this wrestling legend, is arguably one of the most emotionally powerful human interest documentaries they’ve ever made, and can be seen here, in its entirety.)

What are your favorite sports films?