When I was a newspaper beat reporter, one of my first big assignments was covering a murder trial. The case: A mother and her daughter had killed their mother/grandmother while she slept. Stabbed her 57 times. Planned it for two months. Sounds compelling, right? While the crime was sensational, the five days in court were not. This murder trial was tedious, dull, and not at all like the movies.

The funny thing is, I have yet to see a film that accurately portrays what it’s like inside a real courtroom. Yet we let these movies get away with it. Why? Because when done right, few things are more compelling than a solidly written courtroom drama.

Note: The only rule for this list was that the majority of the film’s running time had to be set in a courtroom. Movies with compelling single trial scenes were not considered. 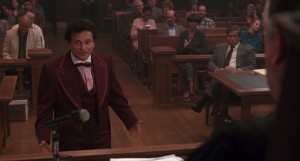 By far the most hilariously amusing film ever set in a courtroom. My Cousin Vinny is one of those flicks I can watch over and over, and never grow tired of. Marisa Tomei received a lot of flak when she surprisingly won the Oscar for her performance as Mona Lisa Vito. Me personally, I don’t think the detractors’ defense holds water. 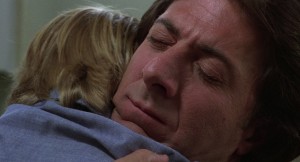 The trial sequences in Kramer vs. Kramer have got to be some of the most brutal scenes ever featured in a PG-rated movie. As Ted and Joanna Kramer suffer tumultuous custody battle, their respective lawyers rip the other Kramer to shreds. The result is simply horrifying. It makes me weep for anyone who has endured something like this.

Philadelphia wasn’t the first film to openly discuss AIDS, but it was the first mainstream Hollywood movie to do so. In that regard, I’ve always considered this film the most daring one Jonathan Demme ever made. It’s also one hell of a gripping courtroom thriller, with tension and emotion achieved through a tight script and Oscar-worthy acting. Few movies hit me like this one. 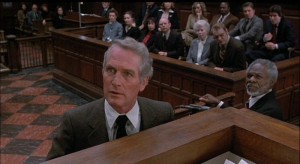 Sidney Lumet’s The Verdict doesn’t spend nearly as much time in a courtroom as some of the other films on this list, but what it achieves during its trial scenes is something few movies do. Take, for instance, Paul Newman’s lengthy closing summation, in which he presents his definitive case to the jury, while also proving his life worth. The scene is a technical ballet of non-editing, camerawork, and an actor who always knew how to hit his mark. 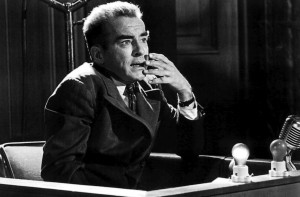 Judgment at Nuremberg is a tough ride. It’s emotionally taxing and tediously precise, resulting in as epic a courtroom drama ever made. Every single player of the impressive cast is on point here, but the standout is Montgomery Clift. Nearly unrecognizable after suffering a debilitating car accident a few years earlier, Clift’s problems off screen nearly forced director Stanley Kramer to recast him. But the director stuck with his star, and encouraged some of Clift’s best work. It breaks my heart every time. 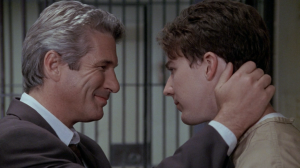 I’m a huge fan of Gregory Hoblit’s Primal Fear. Richard Gere, the wise ass. Edward Norton, the tortured white trash. Laura Linney, the cunning career woman. John Mahoney, the relentless jerk. And that’s just the acting; there is much more that makes Primal Fear worthy, including twisting and turning courtroom battles that always keep you guessing. The final courtroom scene, in which Gere berates Norton into a psychological episode, is pure manic joy. 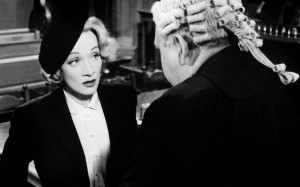 Sure, by the end of Witness for the Prosecution, the movie seems more interested in shock than anything else, but by and large, most everything about Billy Wilder’s film shines like cinematic gold. You’ve got Charles Laughton seriously hamming it up as a master barrister, Tyrone Power as a convincing deer in the headlights and the great Marlene Dietrich as the blonde puppeteer playfully controlling the strings. The script is bold, the acting is persuasive, the direction is tight – the whole film just sings. 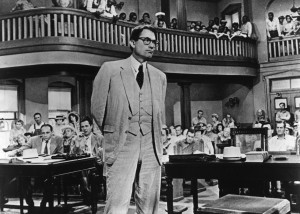 There’s a horrifying acceptance that kicks in about halfway through To Kill a Mockingbird. It’s when the audience realizes that, despite Atticus Finch’s best efforts, his black client is going to be wrongly convicted of raping a white girl. At this point, we can’t help but ask ourselves – if a similar crime occurred today, would the people deciding the fate be so quick to judge? To Kill a Mockingbird was released more than half a century ago, but it remains as topical as ever. And that is damn hard to stomach. 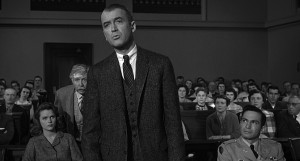 Otto Preminger pulled out all the stops for Anatomy of a Murder. He assembled a perfect cast, pushed for a wildly audacious script and secured a running time that was usually reserved for period piece epics. The result is as extended, complex, and deceitful a film that has ever been set inside a courtroom. For me, Ben Gazzara is the main selling point, I never know when to trust him, when to fear him, and when to follow him. A cold and calculating master of deception. 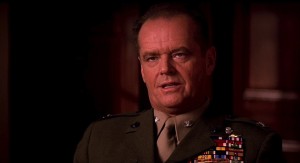 I can hear cries afoul already, but give me a moment to save face. Do I think Rob Reiner’s A Few Good Men is a better movie than To Kill a Mockingbird? No, I do not. Is it better than Kramer vs. Kramer, The Verdict, or Anatomy of a Murder? Nope. But I do think it is the most entertaining and engaging film ever set inside of a courtroom. The best way I can describe how I feel when I watch A Few Good Men is charged. I feel charged by the energy of Aaron Sorkin’s script, by the sarcasm in everything Tom Cruise says, by the fear Jack Nicholson instills with a look. I love this movie and I love the impact it has on me. Everytime, all the time.