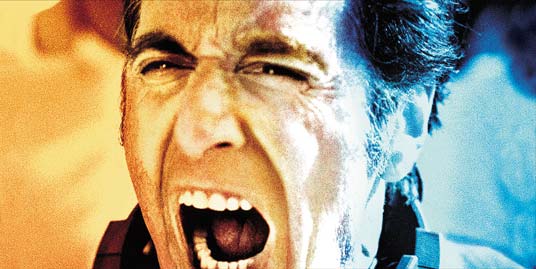 No one rants like Al Pacino. And the topic matters little. Ranging from potential prison sentences, a female’s derriere, the absence of God, the losing of a real estate contract – there’s no subject that doesn’t get Pacino’s blood pumping. Some of the picks below are genuinely terrifying rants executed to perfectly by a master thespians. Others are (or border on) being parodies of themselves. Some are subtle, others are full tilt. Know what they all have in common? Pure Pacino badassery.

Pacino does Shakespeare, and completely kills it.

After being told he has AIDS (and that he contracted it definitively from having sex with men) famed ruthless attorney Roy Cohn precedes to threaten, belittle and intimidate his own doctor. An endlessly fascinating rant of denial and worthless self-entitlement.

According to Hank Azaria, Pacino’s “GREAT ASS!” line was completely improvised. Azaria has admitted that his reaction was his own, not his character’s.

(Note: of all the hundreds of YouTube clips of Pacino saying this line, I could not find one that was embeddable. You can watch it here.) 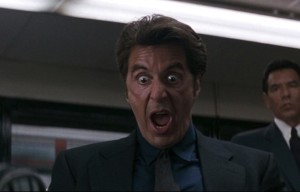 This one speaks for itself.

Pacino at his most Pacinoesque: loud, ridiculous, irrational, brilliant.

Did Pacino deserve the Oscar for this movie? Given his competition, nah. But this speech is certainly why he won.

A smart, articulate manipulation of words in which a news producer covers all his bases. It’s a thrilling moment in a subtly thrilling film.

2. Glengarry Glen Ross – “You never open your mouth, ‘til you know what the shot is.”

Al Pacino’s complete, eloquent, profane thrashing of Kevin Spacey in Glengarry Glen Ross may in fact be the finest verbal take down one man has ever done to another in film. Well, except for Alec Baldwin’s epic rant that opens the picture, of course.

If I see a better Coach in the Locker Room Speech in my lifetime, then I will be completely stunned. From Pacino’s escalating energy, to Jamie Foxx literally stepping up as a leader, to the pumped up reactions of the players – this, my friends, is how it’s done.

There are plenty more to choose from, be sure to tell me your favorites!