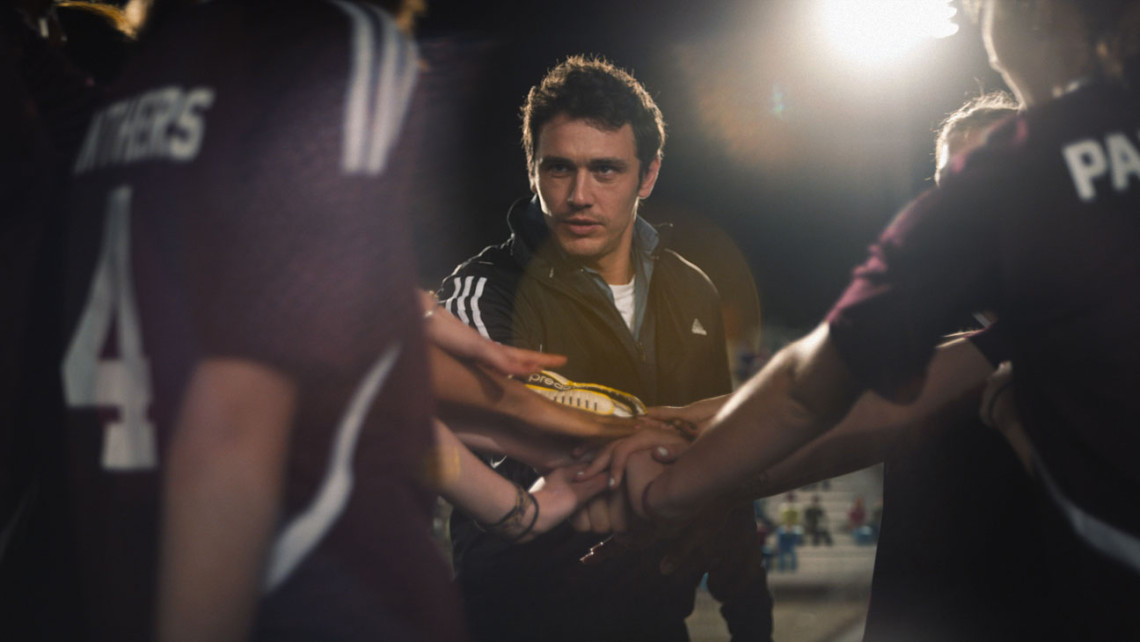 Palo Alto is Gia Coppola’s adaptation of James Franco’s short story collection of the same name. That sentence in itself already reeks of pretentiousness, connoting the image of an art-house wannabe, try-hard effort of a film. However, any preconceived notions of this film simply based on who made it and their reputation in Hollywood need to be debunked, because this is a surprisingly touching, heartfelt insight into damaged teen life.

Gia Coppola–the niece of Sofia Coppola–proves that she has talent all on her own. It’s usually a little bit harder for people who come from privilege to gainn their own individual respect, but Gia earns it with her stunning first feature. James Franco should be proud of what has come together from his short story collection. He has crafted complex teenage characters, and although the film is not an anthology of stories but elements of each story woven together, it works on a narrative level that is alarmingly effective.

Coppola’s directorial style is similar to that of her Aunt Sofia, and comparisons will be inevitable. However, both her stylistic choices and the potent story that she’s working with make Palo Alto much more interesting than anything Sofia Coppola has ever done. It weaves together the stories of a group of high school friends who are each dealing with their own growing pains. The cast includes standout performances from a crop of young actors who really dig under the skin of these teenagers and make the film instantly relatable and touching. Even if the audience has never quite experienced the level of ordeals that these kids go through, the emotions are performed so well both through the actors and the film’s dreamy style that it’s hard not to empathize with these characters. Emma Roberts, Nat Wolff, Zoe Levin, and newcomer Jack Kilmer all create complex teenage roles, and despite the crazy and irrational things they do, we still manage to root for them.

Emma Roberts delivers a beautiful performance as April, who is neglected by her family and seeks solace in her school coach, played by James Franco. She’s portrayed as a smart, level-headed person who is just a little lost in the crowd. Nat Wolff and Jack Kilmer play best friends on opposite sides of the spectrum. Wolff’s Fred is loud and attention-seeking, doing anything and everything he can to be the life of the party. Kilmer’s character Teddy is quiet and struggles to fully express himself. Both young actors deliver memorable performances of teenage boys that will stand out among other high school films.

The film handles topics like homophobia, drunk driving, and student-teacher affairs in a realistic way. It doesn’t lay blame on anyone–each character feels so fully developed that it’s easy to understand their choices and what compels them to make these mistakes. The film is very non-judgmental; for example, the school “slut” Emily (a remarkable performance by Zoe Levin) is presented with much more complexity than most other films may have given her. It also helps that the cast has such a great chemistry, and that we can easily believe these kids are all friends and care for each other.

The directorial style is dreamlike with some very interesting stylistic choices. There are voiceovers, random anecdotes punctuating events, and some truly heartwarming and quirky touches that really help bring the film to life. It tries to balance “cuteness” with the raw and harsh elements of its plot. Even the student-teacher affair between April and her coach doesn’t get displayed as ultra-creepy as it could be; Coppola handles it in a very gentle and gracious way.

Palo Alto is a teen drama encourages the audience to understand and empathize with each of the complex characters. With break-out performances from all of the leading cast members, a dreamy yet realistic style, and an emotional punch, it’s a film that could potentially redefine the high school genre. Gia Coppola, welcome to the family.