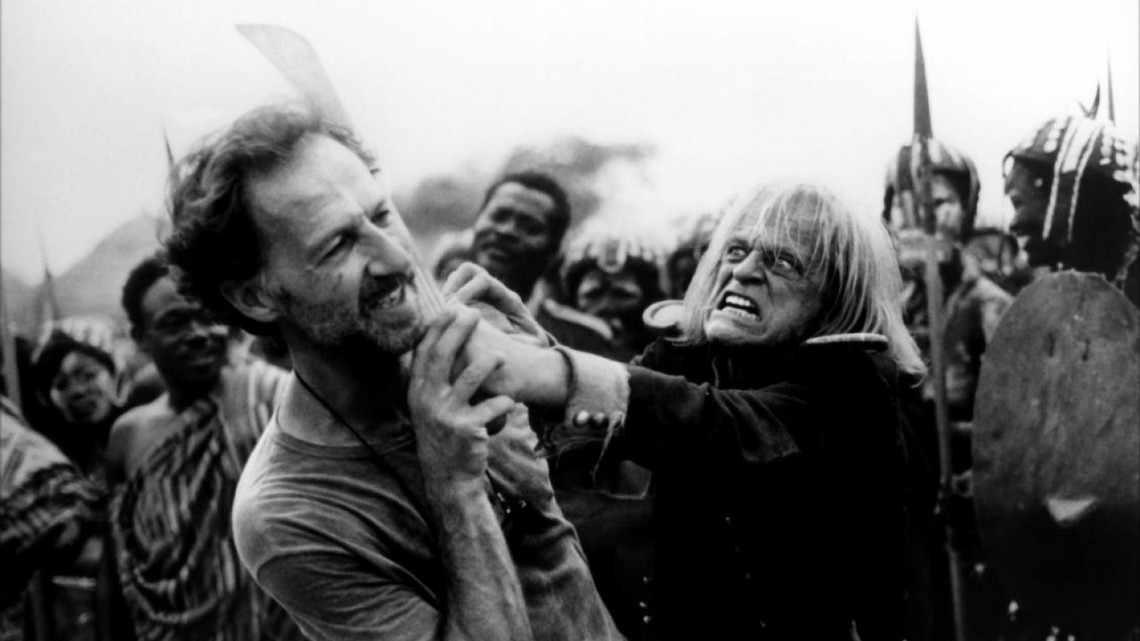 This Week on MUBI: “My Best Fiend”

Jake Cole looks at the Werner Herzog documentary "My Best Fiend" for this week's MUBI column.

Werner Herzog outlines his vision of Klaus Kinski in the first seconds of My Best Fiend, digging up footage of an experimental theatrical performance the actor gave early in his career as Jesus. If the notion of Herzog’s volatile muse playing Christ strikes a dissonant chord for you, rest assure that it did even for the audience who bore witness to this then-unknown freak ranting in 1971. As staff and even audience members begin to come on stage to take the microphone away from him, his performance breaks down, or maybe it somehow gets more focused, morphing into a furious interpretation of Christ’s message falling on the dismissive ears of philistines.

Kinski, the mad Messiah, the insoluble alien being, has been dead for eight years at the time of the film’s release in 1999, yet in many ways, this is his final collaboration with Herzog. As the director takes a train back to some of the locations for his breakthrough masterpiece Aguirre, The Wrath of God, he meditatively looks out of the window at rivers, mountains, and mist outside, while the soundtrack plays a recording of a particularly virulent tirade.The juxtaposition of Kinski’s phantasm-like rage with Herzog’s ambivalent gazes at nature feel like a new work, one that distills the pair’s dynamic.

Interspersed with footage of the films are calm reminiscences of terrifying behind-the-scenes drama between the director and his star, as well as the star and anyone within pistol range. One of the indigenous cast of Aguirre talks with Herzog about how Kinski fired rounds at a hut where dozens of extras were playing cards and injuries were miraculously limited to one man’s fingertip. In many cases, the subsequent cuts to clips of Aguirre or Fitzcarraldo or Cobra Verde look almost muted when stacked against the real fright of each production and Kinski’s mercurial temperament. Even when far more serious issues arose during shooting, like a man amputating his own foot to stop the spread of a snake’s venom or a plane crashing on its way to a location, Kinski found a way to make himself the center of attention at all times.

All of this calls into question whether Herzog’s films with Kinski attained their hypnotic natural force because of this constant state of tension or despite it. To be sure, few of Herzog’s documentaries and only one fiction film, Stroszek, meet the level of quality of his Kinski collaborations. Yet to parse these archival scenes of the actor’s rampages for clues to the energy of the actual films is to miss the far more rewarding, deepening nuances of Kinski’s performances: the muted, barely contained madness of Aguirre; the insular self-loathing of Nosferatu; the manic optimism of Fitzcarraldo.

Herzog’s natural ambivalence as a filmmaker and thinker save the documentary from being a reductive simplification of his own career. Instead of merely attributing the wildness of his films to Kinski, the director investigates his own culpability in enabling Kinski, as well as his own tendency to madness. In an old interview for American TV, a reporter asks Kinski why he works with Herzog. “Because he’s crazy,” the actor replies without thinking, a statement he makes with a curiously loving smile on his face, more affectionate than anything shown on-set. Herzog’s wry sense of humor also shines throughout, as when he visits Kinski’s old flat, now owned by a respectable elderly couple, and proceeds to tell them of the debauchery and ruin that used to be wreaked upon the place as the other two look after his casual points with sudden nervousness about the sturdiness of their home. Later, he recalls a particularly horrid blow-up while shooting Fitzcarraldo in which Kinski went off on a producer. “By some rare chance I was not the brunt of it this time,” Herzog says, with a blend of sarcasm and a certain amount of relief still in his voice decades later.

Since the gliding helicopter shots of Moments of Darkness, Herzog’s nonfiction has grown increasingly gentle, defined by elegant Steadicam shots, sedate composition, and abstract philosophizing. My Best Fiend stands at the precipice between this style and the director’s earlier, more personal ruminations. As much the subject of the film is Kinski, Herzog globe-trots to all the places where he and his actor worked.Yet for all the transportive qualities of his mellifluous voice and extemporaneous thoughts, the director subtly communicates a basic idea by often placing himself alone in frames: that he is somewhat lost without his bitterest friend and most loving enemy. The film ends with a shot of Kinski, in a moment of tranquility, delicately playing with a butterfly that crawls over his fingers and flits about his face. The first time watching this movie, this scene clashes with the portrait sketched of the actor as a wild man, but gradually one comes to see it not as a contrast to Kinski’s volatility but a more complete rendering of it. It’s a fittingly irresolute coda from a man still grappling how he could have spent so much of his life around such a person, and why he still misses him.

If you’re interesting in watching My Best Fiend on MUBI, use your Movie Mezzanine coupon for an exclusive discount and access to a breathtaking library of cinema!