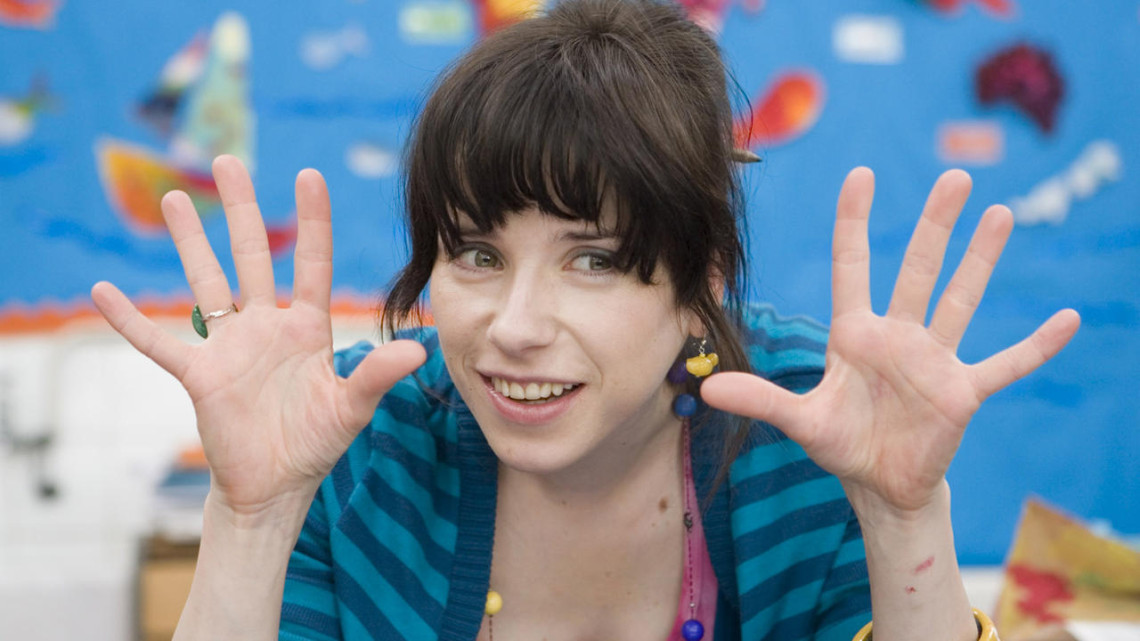 This Week on MUBI: “Happy-Go-Lucky”

In this week's column, Jake Cole takes a look at the 2008 Mike Leigh film "Happy-Go-Lucky."

Happy-Go-Lucky is an aberration in the social-realist black comedies of Mike Leigh. In fact, it often seems an overcompensating response to that filmography, pitting the eternally sunny Poppy (Sally Hawkins) against a world populated by more customary Leigh figures and having her greet their mockery and anger with cheer. Pale, cold lighting gives the cinematography the lightly bleached look common to realist cinema, but the bright color palette subtly renders the world as Poppy sees it. For her, the outbursts and general rudeness of those around her are disruptions of a true, calmer state, not the norm.

At first, Poppy comes off like a caricature, as if Leigh wanted to put someone so insufferably optimistic that the audience would beg to go back to his usual stable of sardonic, listless characters. Poppy is the sort of person who can have entire conversations with only herself, remarking on everything she sees and making some light-hearted, self-deprecating crack about it. When she gets her bike stolen, Poppy shrugs it off by wishing she could have said goodbye to it. By nights, she goes clubbing in places that still rave like it’s 1994. Even her job as a primary school teacher speaks to a sense of arrested development, allowing her to fingerpaint and make masks out of paper bags all day. Late in the film, Poppy’s own sister confronts her about her dead-end life, conflating her carefree nature with destructive naïveté.

Gradually, however, Poppy’s nature reveals itself not to be the product of stunted emotional awareness but a constantly adaptive reaction to those around her. There is a kind of fearlessness to the woman’s interactions with those immediately turned off by her disposition. Poppy notices everyone who reacts brusquely to her and, even when she calls attention to it, ignores the rudeness to maintain her mood. That perceptiveness pokes through at the right moments, as when she catches a child in her class bullying other students and takes the time not to confront him but to talk with him. Another teacher would have just punished the child, but she manages to uncover his abusive domestic life and get the boy the help he needs.

As both a comic filmmaker and a realist one, Leigh rarely gets spoken of in terms of his visual acumen, something that the director himself has bitterly noted. Happy-Go-Lucky demonstrates the director’s subtle skills; few of his films, short of the seasonally divided Another Year, uses aesthetic changes to so clearly mark shifts in mood. This is especially noticeable when Poppy starts to take driving lessons from Scott (Eddie Marsan). Scott is the karmic balance to Poppy’s unstoppable joy: he screams and rages at everything, spouts conspiracy theories laced with racism, and he appears to find Poppy’s joking demeanor personally offensive. Leigh uses the cramped space of the car to substitute the roaming shots that reflect Poppy’s free spirit for the sense of being trapped in a cage, of being in Scott’s insular, broiling headspace.

Leigh’s method of building scripts out of extensive rehearsal and improvisation is a hallmark of the man’s films, but here that approach is vital to preventing these characters from coming off as absurd types. Hawkins reacts with lightning speed to everyone, suggesting less a ditz than someone perhaps even more on her guard than the irritable people she meets. Her scenes with Marsan are masterful interplays of mounting tension, whether in Poppy’s open-mouthed shock at Scott’s xenophobic remarks, or how Scott’s fury masks an attraction to his student. That angle itself reeks of narrative expectancy, but the actors keep it grounded in the desperate psychological walls that both people erect to deal with the world. In that sense, Happy-Go-Lucky isn’t a departure for Leigh; it’s one of his most quintessential expressions.

If you’re interesting in watching Happy-Go-Lucky on MUBI, use your Movie Mezzanine coupon for an exclusive discount and access to a breathtaking library of cinema!