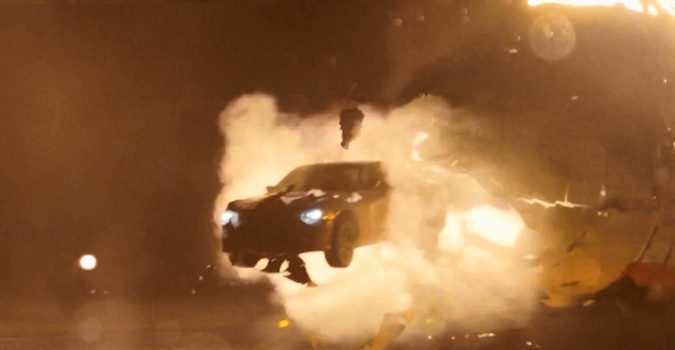 This Week in the Death of Cinema: Cars Out of Planes!

Sometimes it feels like there’s a new article every week decrying the death of cinema. I thought about that and decided, “why not make that feeling true?” So here it is, a weekly column chronicling the slow demise of the art form we love so much.

Cinema’s slow crawl towards death continues unabated and the proof is in the pudding. That pudding? The Super Bowl. The proof? Super Bowl movie trailers.

It’s madness! Take a look at this trailer for Gore Verbinski’s The Lone Ranger:

Trains! Action! Slow-motion! Racism! Johnny Depp! The marketing department at Disney clearly assumes that all the audience needs to care about are superficialities. The sad part is they’re probably correct. An action movie directed by the man who made Pirates of the Caribbean and starring Depp is sure to make trainloads of money.

The spot for Iron Man 3 takes a decidedly different approach. Here we’ve got a character we already know, and so Disney chooses to focus on a single scene:

It’s a great technique, giving the audience a sense for the kind of stakes involved in the film. It gives the illusion of depth, when really all it’s doing is showing brief snippets of a single action sequence completely out of context from the rest of the film.

And then there’s this admittedly awesome ad for Star Trek Into Darkness:

“I am better.” “At what?” “Everything.” Sure, Benedict Cumberbatch could easily be describing himself, but this is in the trailer for a movie, so he’s probably speaking lines about his character, a character we know nothing about and bit of dialogue that makes no sense without context. But it sounds so cool!!! “Everything.” Done. Ticket sold.

We all know why we’re really here, though. There’s only one trailer during the Super Bowl that mattered:

It doesn’t even make sense that the Fast and the Furious still exists, let alone that it’s pumping out one of the biggest films of the summer movie season. Are these movies even about racing anymore? Do we even care? Did you see the car bursting out of a crashing plane that was on fire? But did you really see it and take it in and let it become a part of your soul?

And there it is, the death of cinema staring us in the face. A trailer for Fast & Furious 6 comes on and instead of balking at the stupidity of having come this far we lose our minds for a car flying out the front of a plane.

Apparently we can’t help it, and maybe we just need to accept that the cinema dying may not be the worst thing in the world. I mean, did you see that car exploding out of that plane?