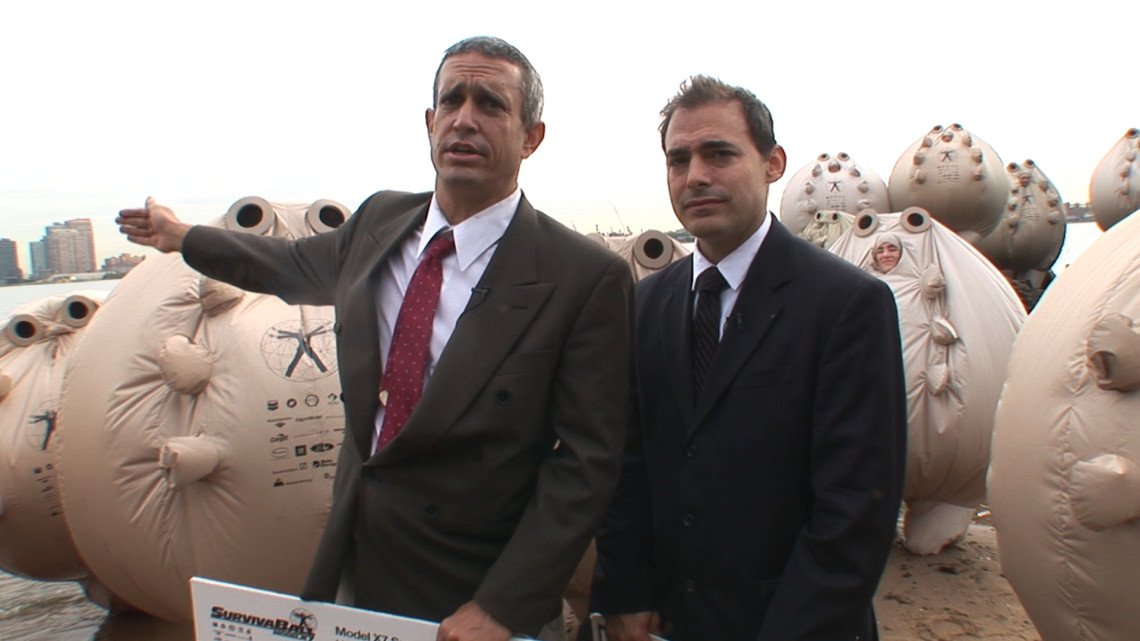 “The Yes Men Are Revolting”

For over 15 years, activists Jacques Servin and Igor Vamos (aka Andy Bichlbaum and Mike Bonanno) have pulled multiple high-profile culture-jamming stunts as the Yes Men. The Yes Men Are Revolting, co-directed by Bichlbaum and Bonanno alongside Laura Nix, is the third documentary about the duo, following 2003’s The Yes Men and 2009’s The Yes Men Fix the World. Bichlbaum and Bonanno have masterminded a long string of pranks on corporate America, generally posing as spokesmen for the likes of BP, the WTO, etc. to make ludicrous, attention-grabbing presentations. It’s trolling as a form of protest, and they have it down to a science.

But protesting doesn’t pay the bills. And even more dispiritingly, it can often feel like it doesn’t work. If anything, the corporate grip on society has tightened during the Yes Men’s tenure. Whereas the first two films in this informal trilogy focused mainly on the group’s actions, The Yes Men Are Revolting trains the camera more on Bichlbaum and Bonanno’s personal lives. It’s an admirable attempt to make sure that this doc has something new to say — otherwise, it’d be completely redundant after Fix the World, little more than an Up-series-esque update on what the Yes Men have been doing lately. But that strategy doesn’t pay off in any appreciably distinct way.

The Yes Men’s antics are undeniably entertaining, and it’s always fun to watch them plan and execute their goofs. Fix the World struck a good rhythm with this, almost operating like a heist film at times. But when this movie peels away the smirking trickster front, Bichlbaum and Bonanno don’t come across as particularly interesting. They’re both pretty well-off white dudes whose biggest real struggle in life was being weird when they were young. Much of the drama in Revolting stems from their anxieties over getting older and family life taking over. Blandly standard middle-class concern, in other words.

There’s worthwhile territory to explore on the subject of how personal matters can hinder one’s devotion to a larger cause, and what it’s like to feel like your efforts at affecting change have been pointless. But The Yes Men Are Revolting eludes serious interaction with these ideas and charges straight for pat reassurance. It draws a line between the Yes Men’s anti-consumerist spirit and that of Occupy Wall Street, even though the latter movement’s actual, tangible effects on culture are currently debatable at best. The thought that perhaps the best anyone can do is fight, even though it may end in defeat, is ignored.

And all of this comes courtesy of the most wearied issue-doc aesthetic conventions. It’d be wonderful if The Yes Men Are Revolting could trust the audience to know the basics of climate change and corporate lobbying, but there are annoying animated graphics to hold our hand all the way. Which is fitting, since the movie’s whole purpose seems to be to give a reassuring shoulder rub to Gen X’ers who worry that they might not have done enough good while they were in their prime.