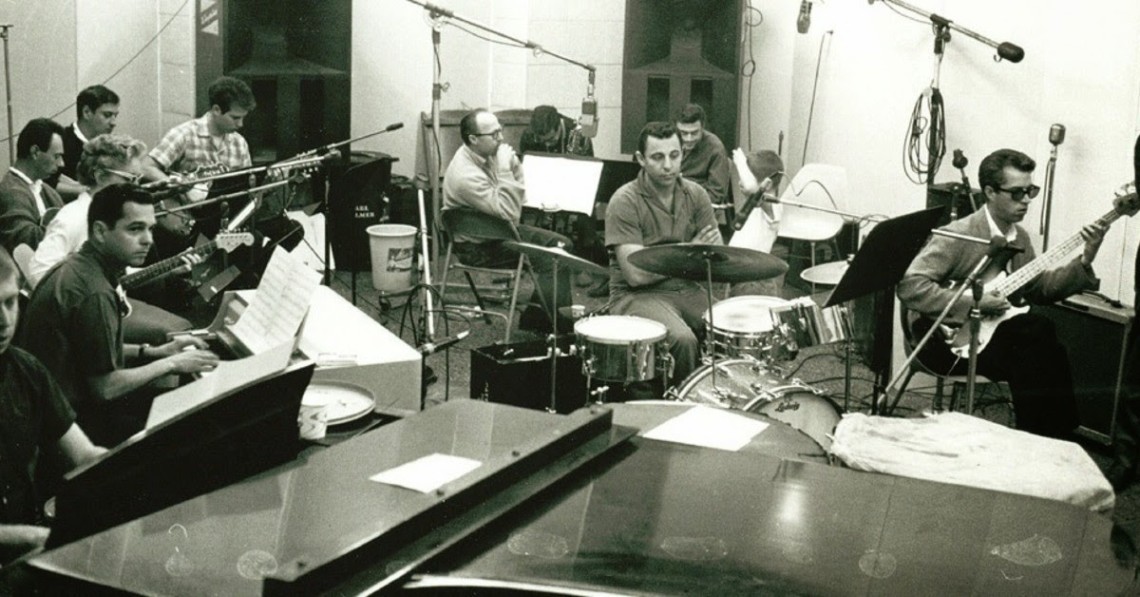 Director Denny Tedesco calls The Wrecking Crew “the most expensive home movie ever made,” which pretty well sums up the movie’s strengths and limitations. Shot here and there over the course of decades, it’s a grab-bag of interviews and archival footage intended to shine a light on the filmmaker’s father, Teddy Tedesco –guitarist in a loose collection of unsung session musicians who played on what seems to be just about every hit record that came out of Los Angeles from the late 1950s through the early 1970s.

For countless artists – including The Beach Boys, Phil Spector, Sonny and Cher, Elvis Presley, The Mamas And The Papas, The Byrds, Nancy Sinatra and, most notoriously, The Monkees — these workaday players were a producer’s secret weapon, effortlessly jumping genres and providing the backing tracks for an entire era’s most memorable tunes. Seasoned professionals, most of whom didn’t even particularly care much for rock n’ roll, the Wrecking Crew (as they came to be known) just treated their turns on these iconic albums as a job like any other — albeit a job at which they happened to be very, very good.

Sometimes, it was a matter of expertise. Brian Wilson explains how he never could have gotten the precision musicianship required for Pet Sounds had he tried to record it with The Beach Boys, a decision that caused some hard feelings and then sighs of relief when the rest of the band heard what they would’ve had to play. Other times, it was an economic choice. Roger McGuinn knocked out “Mr. Tambourine Man” in less than 3 hours with the Wrecking Crew. Recording a song with The Byrds took days.

The expansive gang, which includes the elder Tedesco, drummer Hal Blaine, sax player Plas Johnson, and bassist Carol Kaye – not to mention Leon Russell and Glen Campbell — kick back for casual chats, recalling the old days with wry smiles. There’s an obvious comparison to be made here with Twenty Feet From Stardom, but Tedesco’s film lacks the awful injustices, grudges, and scumbag music-business behavior that made Morgan Neville’s crowd-pleaser such a cathartic celebration of short-shrifted talents. By contrast, these folks were all extremely well-compensated pros with no hard feelings. (Kaye happily points out that, at one point, she was making more money than the President of the United States.) They even speak of Phil Spector as an exacting collaborator, rather than History’s Greatest Monster.

Nobody looks back in anger. In the 1970s, when singer-songwriters and bands striving for “authenticity” made session players less necessary, Tommy Tedesco went and spoofed his sudden lack of employment on The Gong Show. It’s all extremely sweet-natured, short on drama but full of good vibrations.

The amateurish filmmaking grates sometimes, but all is forgiven upon finding out that the picture was originally completed and played festivals in 2008. Denny Tedesco spent the ensuing years hammering out licensing agreements and taking to Kickstarter to the tune of $300,000, just to make sure all the musicians were properly compensated for the cavalcade of hit songs used in the film. It may indeed be a “home movie,” but The Wrecking Crew is awfully hard not to like.