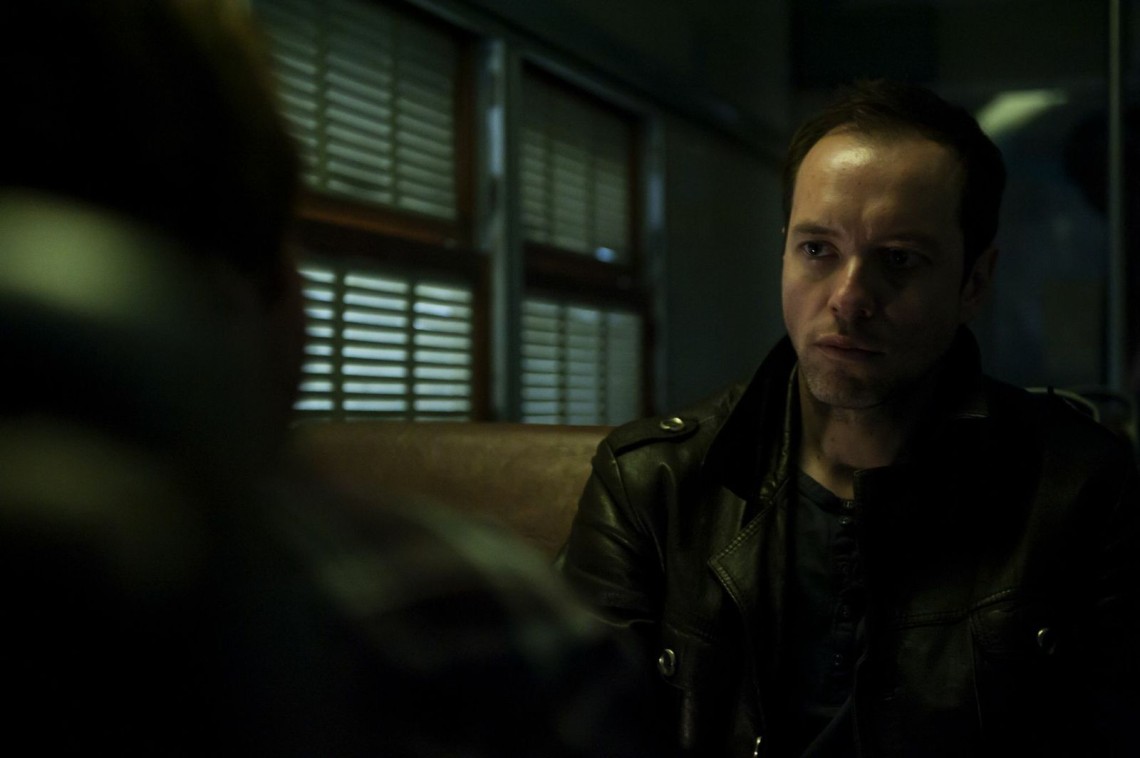 What does one do when life has become so miserable that the only option is to say goodbye to the world? What if even that ability, to take one’s own life, is taken away? That’s the answer director Dru Brown is trying to find in his second feature film, The Suicide Theory. The question is interesting in, well, theory. In practice, it isn’t only left unanswered, but the thought process behind finding a solution for it is so muddled and confused, one wonders why the director pursued it to begin with.

Steven Ray (Steve Mouzakis) is a troubled man who, in the film’s shocking opening sequence, kills a man because he cuts in line at a supermarket line. The source of his violent instincts never becomes clear, apart from the vague notion that aggression is his coping mechanism with grief. The source for this unhappiness is revealed to be a wife who died in a car crash, leaving him permanently scarred and terrified of crossing roads, what with the bitter memory of the accident constantly flashing across his mind.

Three years after her death, Steven has become a professional killer. It is in this capacity that he meets Percival, a man who demands Steven to shoot him in exchange for cash. The reason? Percival’s attempted suicides have all failed, no matter how drastic the measure taken, including jumping off a bridge. Literally bruised and battered, his only option is to hand the proceedings over to an expert. Steven agrees, but on repeated encounters with Percival, the two men begin to have a connection, even as they continue their efforts toward the impending murder.

Percival’s suicidal tendencies, as it transpires, are caused by grief of a similar nature: his male lover, Chris also lost his life. Steven’s first reaction to this revelation is somewhat homophobic, but the budding friendship between the two eases any such tensions. Steven’s understanding doesn’t prove a boon for the film, however, since it becomes one of many points which Brown repeats in endless streams of dialogue. Such relentless exposition throughout the film creates a barrier between the audience and the story from which the film can never free itself. Every emotion is external and verbalized, never actualizing as anything other than performance. That Steven’s main outlet for his emotion is dressing up as his wife in the privacy of his home is an indication of the extent to which The Suicide Theory assumes the audience needs overt, theatrical explanations.

Percival’s insistence that a curse is responsible for his inexplicable ability to survive fatal strikes are playful, and such goofiness would have worked if the film believed in it as the main tonal mode for its outrageous concept. Yet, at every turn, Brown dramatizes the story with Emotion with a capital E, but what the film demands the audience to feel is unmerited when all we are given are verbal accounts of each character’s feelings. Nothing genuine is conveyed, and the actors, particularly Mouzakis, are not to blame, for they give their thinly written characters as much as possible.

Although The Suicide Theory is rarely dull, it lacks the emotional precision required to elevate it above merely an amusing concept. The narrative’s complete reliance on fate and, worse yet, repeated reminders of this reliance, further expose the film’s shortcomings. Destiny’s hand extends so far that, in the final moments of the film, it even justifies the disregard for spatial and temporal coherence. If there is a meaningful theme in The Suicide Theory, it is buried under its heaps of exposition. It’s a real shame, because the theory had the potential to grow into a more deeply felt story.