In the last few years, a number of filmmakers have, intentionally or not, used their first feature as a kind of calling card to bigger and (hopefully) better things. Josh Trank directed Chronicle, a film whose success allowed him to get hired as the director of the new Fantastic Four as well as one of the upcoming Star Wars spin-off films. Colin Trevorrow’s sci-fi comedy Safety Not Guaranteed helped get him to a place where he could direct Jurassic World. In many ways, the new film The Signal feels like a more calculated attempt than those examples, a chance for its co-writer and director, William Eubank, to prove to Hollywood executives that he’s got the skills and talent to direct whatever remake, reboot, or otherwise epic blockbuster they’ve got lying around. While his eye for creating striking visuals is indeed noteworthy, it’s probably best if he stays away from writing his next project.

The Signal follows three college students: Nick (Brenton Thwaites), his girlfriend Hailey (Olivia Cooke), and their best friend Jonah (Beau Knapp). This trio is traveling cross-country to drop Hailey off at CalTech, leaving Nick and Jonah behind at MIT. Before they reach their final destination, they’re distracted by a hacker named Nomad, whose proficiency at breaking into their computers while they stop at a motel one night inspires them to confront him (or her). In doing so, they wind up, in the middle of the night, at a shack in Nowhere, Nevada. And so, like any sane person would do, Nick and Jonah leave Hailey in the car to explore a place so comically unwelcoming, a serial killer would think it too obvious to hole up there in the hopes of luring helpless victims. For a second, it looks like Eubank and his co-writers Carlyle Eubank and David Frigerio are just going to deliver another idiotic-young-people horror movie–Jonah’s even got a camera to film the confrontation. But no: once the kids approach the shack, what they find is indeed unexpected, just not exactly terrifying. 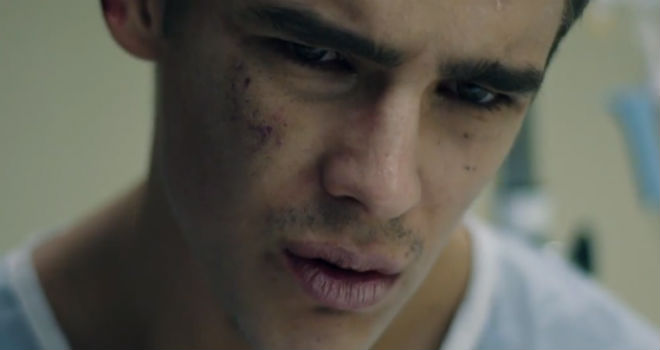 For a good chunk of its running time, The Signal is able to get away with being vague and mysterious; Nick is a smart young man, certainly, but he can’t fathom what happened to him at the shack or why he’s now questioned in a sterile environment by a disturbingly calm scientist (Laurence Fishburne, whose very presence lends the picture gravitas, even as his dialogue is fairly goofy). Unfortunately, the second half of The Signal can’t afford to be as mysterious; once it starts answering questions, it becomes extraordinarily, eye-rollingly silly. This is in part because the answers are far less satisfying than the questions, and in part because the way the characters react to their circumstances is strangely low-key. The revelation regarding Nick’s physical condition–as the film opens, he’s unable to walk without crutches, but he has constant dreams of a past when he ran freely–is immediately shocking; however, when Jonah and Hailey find out what happened to him, they just about ignore it. All in all, for a movie mixing body horror and science fiction, the characters in The Signal seem strangely blase about the fantastical goings-on.

Visually, at least, Eubank knows what he’s doing. He and cinematographer David Lanzenberg present The Signal in a series of wide shots, most longer than would seem natural. This allows the film to have, at least on the surface, an unnerving and stark atmosphere. Some of the montages, granted, feel like they’d be equally at home if they existed in some faux-Malickian ad for jeans or the like; still, relative to other low-budget genre pictures, The Signal looks more austere and polished, a welcome surprise. And the special effects, which become more prevalent in the final 30 minutes, are solid considering the presumably meager amount of money used to create them.

With that in mind, it really is something of a shame that the people and plot which exist in this noteworthy visual space are so weakly developed. Thwaites and Fishburne do their best–Fishburne’s soothing baritone hasn’t changed a bit since his days in The Matrix trilogy, able to smooth over the dumbest dialogue–but they work in service of a goofy B-movie. In some respects, The Signal feels a great deal like an extended episode of The Twilight Zone, with its set-up building to a shocking twist. In the set-up, William Eubank acquits himself decently as co-writer and director. But the payoff is just too ridiculous to work.

One thought on ““The Signal” Sacrifices Storytelling Logic For Striking Visuals”