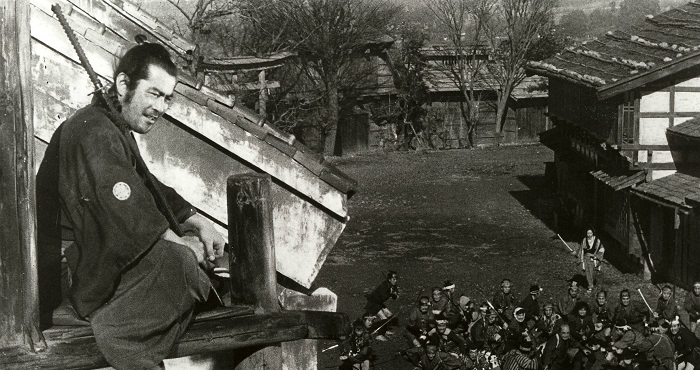 While set in Japan, Yojimbo is a Western. It carries many of the tropes of the America genre, but with some noticeable differences. Although the change in geographical location, culture and time certainly add texture to the film, it’s not what makes Yojimbo distinct as a Western.

Akira Kurosawa’s Eastern Western is notable for not existing in the typical moral dichotomy of the traditional Western. There are not black and white hats, good men vs. evil men. Instead, two rival gangs are trying to take over a small town for their own personal profit. The sheriff, instead of trying to maintain law and order, tries to find a way to get ahead.

One day Sanjuro (Toshirô Mifune), a cunning samurai, wanders into town and decides to stay. He devises a plan to turn the two factions against each other because they deserve it. But far from being the film’s moral compass, Sanjuro isn’t quite as good or heroic as the Western would typically demand of its hero. He backs down from fights, slaughters men who stand no chance if the moment is right, and escalates the conflict through more and more conniving and backhanded ways. 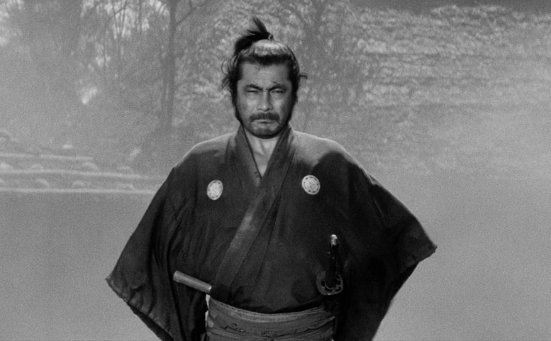 Indifferent to the people, Sanjuro is a force of nature, a cleansing wend that blows through the town tossing about and throwing together the wicked, weak and cruel. He comes down to condemn these men, and then proceeds to seek their punishment with little regard to how morally questionable his means might be.

And yet he also takes amusement in the proceedings, laughing at the rival gangs that talk tough but chicken out and play nice for a bit when a visitor comes to town. In some ways, Sanjuro’s perverse, gleeful enjoyment could be read as a commentary on how morbid it is to make a spectacle out of battles that involve the lives of men. 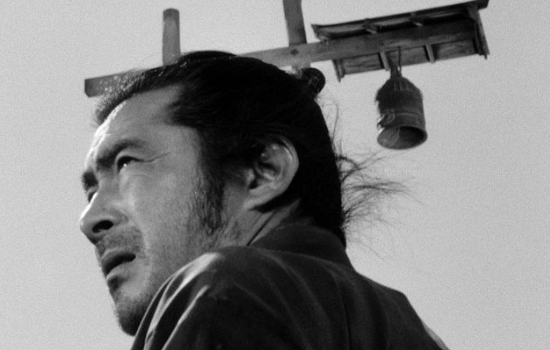 Eventually Sanjuro does find something worth fighting for, a good deed worth doing that supersedes his quest for justice. However, far from being an act of redemption, Sanjuro doesn’t find any absolution from any of his past actions. He’s still a mercenary, still a man of the blade. One act won’t change that.

In the final moment of the film, there does seem to be a sense of regret. Moments from killing one young man, he changes his mind, telling him to return home, be a farmer, live long and well instead of chasing the fleeting thrill of battle.

Yojimbo uses the Western tropes, but exists in a different moral landscape. Its antihero and ultimate conclusion bring many of the staples of the genre into question. Sanjuro doesn’t take the moral high ground. In many ways, he’s just as cruel as the men he kills. But that’s not the point, the point is that when it matters, the right kind of man protects the weak. It won’t redeem him, but certainly gives others the chance for a better life.

One thought on “The Second Criterion: ‘Yojimbo’”