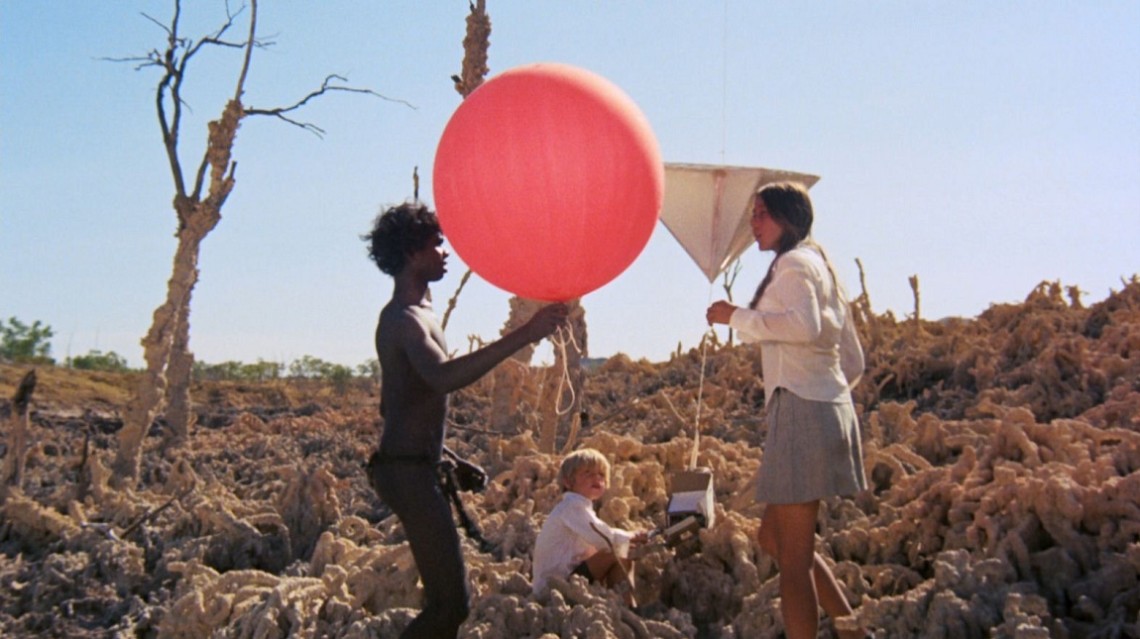 Mankind’s ability to come together and form civilization is a key feature that distinguishes him from the rest of nature. Yet there is a thin line between civilization and nature. In Walkabout,  The Australian Outback provides a visual space to explore the relationship between the two.

The inciting event of the film creates a thematic dissonance. A Father (John Meillon) takes his two children into the outback and then begins firing a pistol at them. The Girl (Jenny Agutter) and her brother (Luc Roeg) escape his grasp and he burns his car before shooting himself. Left on their own, The Girl and her brother begin their own impromptu walkabout.

The Father’s attack is filled with the sort of senseless and unprovoked cruelty that one does not find in nature. The sequence is built around these touchstones of civilization. The Girl listens to the radio, while  the boy plays with his toys that are representations of human achievement: cars and guns. And yet the Father ends up using these tools with an evil intent and ends up destroying his car before destroying himself. There’s a brutality in civilized society lurking just beneath the surface.

This is an idea the film returns to later in the film once the children meet an Aborigine (David Gulpilil). The Aborigine goes on the hunt and as he takes down his prey and then proceeds to carve it up, his actions are intercut with a butcher working slabs of meat. The montage demonstrates that the distinction between civilization and nature have less to do with the acts themselves, and more about the space. The Aborigine goes out in the wild and does his work in the open air while the butcher is in a closed, clean space. Civilization does not remove acts of violence, it only finds ways to enclose and hide them.

This suggests that much of civilization’s constructs are merely ones of appearance. The film first introduces the idea when the Girl lectures her brother on keeping his blazer clean, stressing the importance of maintaining appearances. The brother rightly asks whom they are keeping up appearances,  as they’ve yet to see another soul. This reveals the weight that is placed on appearances over everything else, which Walkabout suggests is one of the foundational elements of civilization.

Because, when one gets down to it, the actions in the savage and civil spaces are not greatly removed. An attraction begins to build between The Girl and The Aborigine. A series of objectifying shots between them are made, as they become fascinated with each other’s bodies. In the midst of the building lust , the film goes off to civilization once more, to a group of scientists equiping weather balloons. All the crewmen leer over the only female in the group, suggesting that their actions and desires are the same as The Girl and The Aborigine.

When The Girl and her brother finally return to civilization, they’re met by a man who refuses to help them. In contrast, The Aborigine is eager to share his knowledge and befriend them through most of the film. This civilized man babbles on about his allegiance to the company. Corporate interest trumps human interest in the civilized world.

The children are left playing in the ruins of a bunch of mining equipment. This is a thematic continuation of an earlier scene where a group of Aborigines find the father’s burned-out car and begin playing with it. The suggestion is that civilization is doomed to fall to ruins while nature will persist. This idea also helps make sense of the final moment when we see The Girl as a young woman, now married, suddenly reminiscing about her time in nature. It’s an uncharacteristically sentimental scene for the film, a suggestion that for all the brutality of nature, it somehow provides something far more peaceful than than anything in the civilized world.

One thought on “The Second Criterion: ‘Walkabout’”