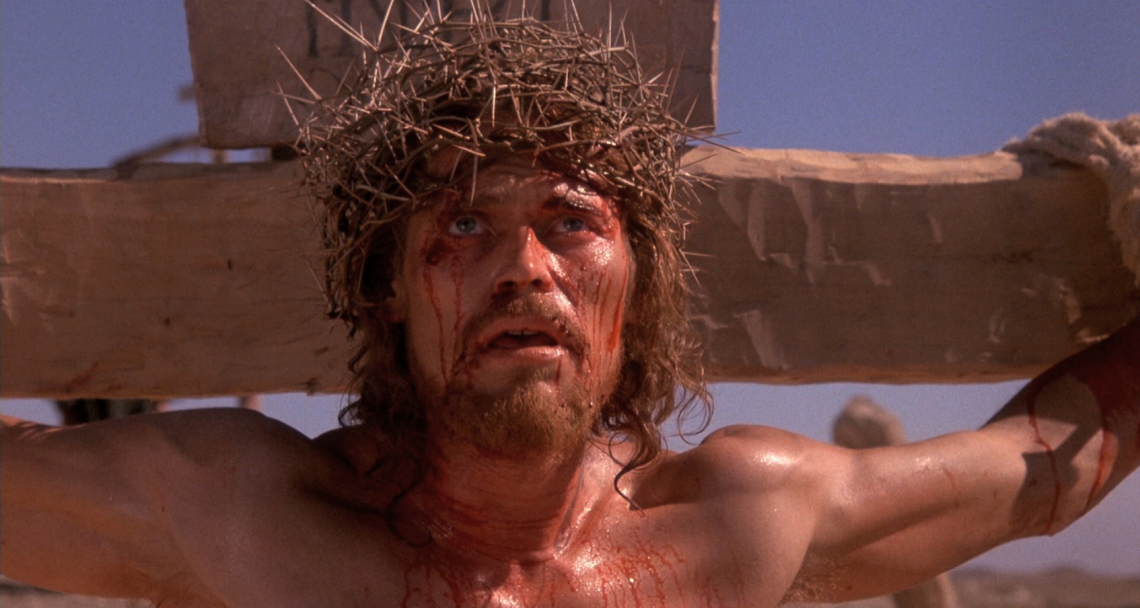 The Second Criterion: “The Last Temptation of Christ”

I was a hardcore Bible kid, growing up. From fourth to sixth grade, I went to a Baptist elementary school. After that, I went to a Baptist middle school. For high school, I was in a Catholic high school, Catholicism being my family’s main religion and not nearly as fun as Monty Python made it out to be. Today, I’m frustratingly agnostic, but that doesn’t mean I consider my years upon years of Bible classes and Sunday School as a waste of my time. Taken literally or metaphorically, there’s something fascinating about Biblical stories, especially when we see them through a modern lens.

This was partly why I was so excited to see Darren Aronofsky’s tackling of Noah, which, based on rumors followed by controversy, was to drastically deviate from the original holy text I spent many years reading and studying. The film didn’t disappoint in that regard, as Aronofsky turned that popular Bible story into a piece of revisionist fantasy; and among its most fascinating details were the “Watchers”, fallen angels whose divine forms were imprisoned in bodies of molten rock. For all the talk of Holy Beings such as angels being omnipotent/omniscient, it was interesting to see a depiction in which, for all their power, they simply couldn’t handle or properly conceive of the sacrifices of taking on an earthly form.

I thought of those Watchers a lot as I rewatched Martin Scorsese’s masterpiece The Last Temptation of Christ in preparation for this essay, and saw a scene midway through of Jesus dancing with fellow Nazarenes in a wedding. You never really hear of Jesus dancing in the Bible or your typical Sunday School teachings. There are implications of him dancing in various Bible verses, but it’s never given much emphasis; largely because Jesus’ humanity is hardly ever focused on unless it pertains to his physical suffering, as if the only thing that made Jesus worth anything as a man was his ability to feel pain. But surely, if Jesus was as fully human as he was fully divine, then the psychological baggage of his conflicting origins must have been much higher than just a single moment of doubt recorded in the Bible, of Jesus praying on a rock in Gethsemane the night before his crucifixion.

This is what Nikos Kazantzakis was primarily concerned with when he wrote the incendiary novel The Last Temptation of Christ, which not only focused more on Jesus’ humanity, but changed the events of his story to accommodate his narrative ambitions, turning Jesus into a deeply flawed human being: an indirect murderer, a hypocrite, a liar, and sometimes even a blasphemer. Jesus never asked to be saddled with this Holy burden, but destiny isn’t kind to Messiahs.

While the book was very controversial, Martin Scorsese’s adaptation of Kazantzakis’ novel managed to receive more negative attention. Raised in a devoutly Roman Catholic environment, Scorsese was concerned not with Christ’s status as Messiah, but with how He was the ultimate figure of the war between the human and the spiritual. Scorsese’s take on that internal struggle is arguably the greatest depiction of both the greatest blessings and burdens of humanity and spirituality.

In Scorsese and Kazantzakis’ version of the story (with special mention to yet another sterling screenplay by Paul Schrader), Jesus’ (Willem Dafoe) life as a carpenter is given a different take, with the Messiah spending his early days fashioning wooden crosses for the Romans to crucify Jews. Jesus is plagued throughout these years with painful voices in his head, continually reminding him of his true purpose. “I never steal, or fight, or kill,” Jesus tells a monastery monk. “Not because I don’t want to but because I’m afraid. I want to rebel against everything, everybody, against God! But I’m afraid.”

Although the Jesus of Last Temptation eventually becomes the Messiah we’re more familiar with, the scenes we know from the story (water into wine, the resurrection of Lazarus, etc.) have been slyly subverted in ways ranging from subtle to purely direct. During the desert odyssey that lasts for 40 days and nights, we bear witness to Jesus receiving the “temptations” of Lucifer/Satan himself, but they’re of a different sort. 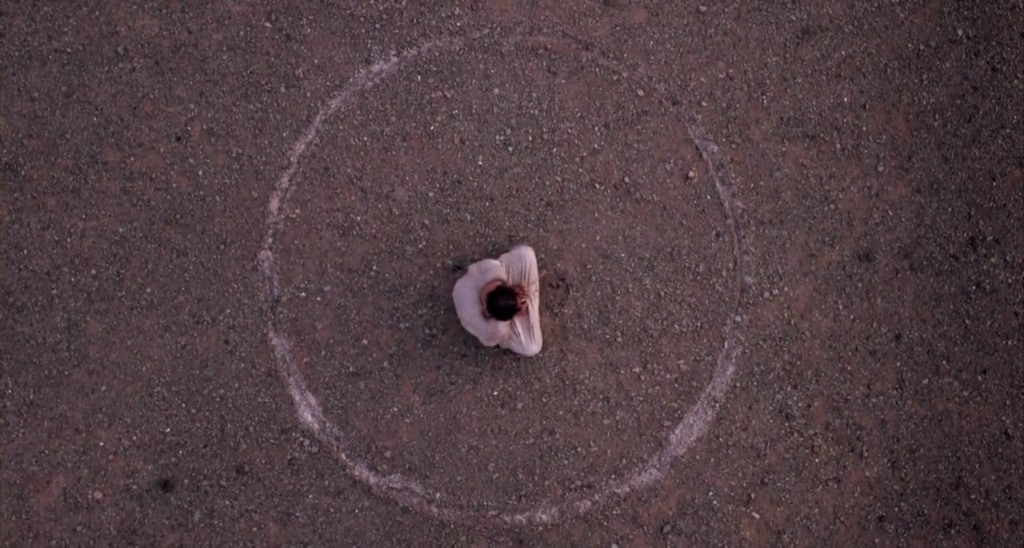 Instead of the Bible’s more generic temptations — turning stone into bread, summon the angels, fall on your knees to worship Satan; all of which are denied by Christ with the simple “Thou shalt not test the Lord” — The Last Temptation gives Jesus proper temptations that tie to his more human backstory. Satan appears in the guise of a snake and attempts to convince Jesus to give in to his sexual urges by using the voice Mary Magdalene, who Jesus is in love with; a lion attempts to tell Jesus his task is over and he could give up now; etc.

While these are all major differences from the source material, the most important distinction is how Jesus reacts. In The Last Temptation of Christ, Satan’s temptations actually do hurt Jesus’ spirit significantly, and you could tell that Jesus is fighting every part of his being to resist these temptations. Compare this to how the Bible presents these dilemmas, with Satan offering a temptation and Jesus simply uttering pre-baked responses given to him from his Father.

Despite being part man, the Jesus of the Holy Bible is all too perfect. That is because he is meant to be more than a man in the religious text. What Scorsese, Schrader, and Kazantzakis seem to suggest in The Last Temptation is the exact opposite: that even with divine blessings, a being tied to the earth can never be more than just a man, Jesus included.

Instead of seeing how Jesus’ humanity affects his divine nature, we see how the divine nature of the Messiah affects Jesus’ humanity. The more Jesus embraces his Messianic nature, the further he moves from his humanity, and thus, his kindness. The way he preaches how He is the lone Savior who will act as the Ark that will save humanity from a flood of Fire, he doesn’t sound like a divine savior but an insane fundamentalist, no better than the average crazy street preacher.

It even brings him to attempt rejecting his human upbringing in a truly wrenching scene in which Jesus’ mother, the Virgin Mary, tries to console him to spend some time with her, to which he responds “Who are you? I don’t have a mother. I don’t have any family. I have a Father, in heaven.” If you may excuse my bluntness, he’s being kind of a dick. And of course he would. Being burdened with the fate of human salvation will surely affect one’s ego, and Jesus is, as established earlier, no more than a man in this version of the story.

Jesus’ attitudes and teachings are also incredibly fickle. He preaches love at first, and then war and anger after his 40 day/night trek through the desert (like a reverse Malcolm X). He attempts to embrace his spiritual nature, only to be brought back down to earth when realizing his true power, such as the look of pure horror on his face when he resurrect Lazarus and discovers his power (or just his Father’s power) over life and death. When he finally realizes that he must be crucified in order to save humanity from their sins (including his own), he becomes more suicidal in his lashes against the Roman temples, hoping the guards would just kill him then and there, sparing him of the burden of crucifixion.

It is when Jesus is finally crucified that we finally get our Last Temptation of the title, where an “angel” appears before Jesus and says “You’ve suffered enough. God’s tested you and He’s happy with you.” She removes the nails from his cross, and leads Jesus to an alternate life where he didn’t have to die. It is in this bravura sequence from Scorsese that we see Jesus finally fulfill his sexual urge for Mary Magdalene, start a family, and live a simple life of domesticity. He’s completely let go of his spiritual side, and lies comfortably in the physical world

The genius of this sequence is that we’ve fallen for the devil’s trap just as Jesus has. It’s one of the most beautiful, heartbreaking sequences Scorsese’s ever filmed. So much so that when we discover it for the sham that it truly is, the angel revealing herself to be Satan offering his “last temptation”, it’s not only crushing, it’s horrifying. We see small glimpses at what the world is like with Jesus having not died for our sins. Jerusalem is on fire according to the disciples, chaos has descended through all of Israel and presumably the rest of the world, and all souls will likely be condemned to hell. Jesus then realizes the importance of his spiritual nature, allowing Jesus to come back to his position on the cross, properly crucified.

It’s never specified whether this was an actual temptation or one of Jesus’ fever dreams. Then again, however, it doesn’t really matter one way or another. What matters is how The Last Temptation of Christ reconciles with the human and spiritual battle, and how Scorsese never condemns one or the other. What makes Jesus’ human life during the Last Temptation so tempting is that those human emotions he and the audience are experiencing are never seen as invalid. There is true worth in humanity and human life, just as there is worth in death and what lies beyond the physical realm.

More than any other film, The Last Temptation of Christ dares us to reconcile our spiritual and physical selves as well, showing that even the greatest of men will never be more than men in life. But that doesn’t mean there’s transcendence beyond our human lives, afterlife or no afterlife. Like those Watchers in Aronofsky’s Noah, the physical is a prison for our spiritual self. But we can make the most of these prisons. And at least all prisons can be broken out of.