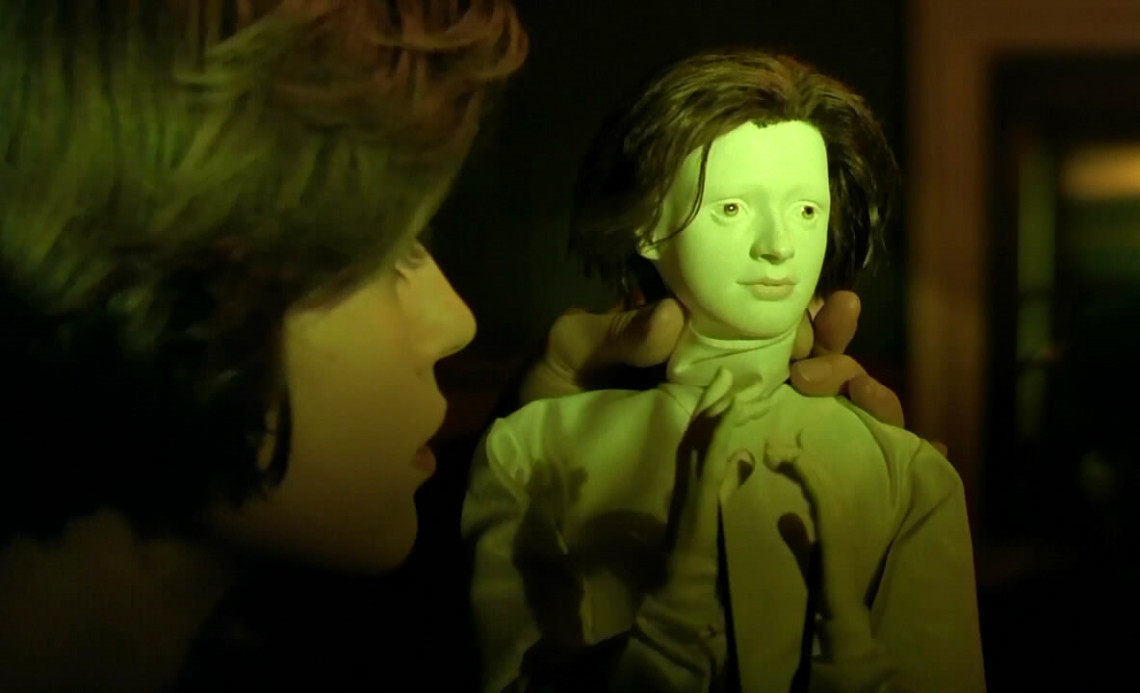 When I wrote a capsule about The Double Life of Véronique, I compared the experience to the oft-quoted line, “talking about music is like dancing about architecture.” Against my better judgment, I’ve decided to push beyond that, and I maintain that the effect of Double Life is primarily emotional, not intellectual—a sentiment that Krzysztof Kieślowski has also expressed. Still, the value of a great work transcends its time and context, and while I will always love Double Life for the sensation it provides, what follows is not only partially an attempt to understand why that sensation is so effective and worthwhile, but primarily how, particularly when considered with Kieślowski’s Three Colors trilogy, the film can still function on a political level, be it international politics or the politics of the family.

When Kieślowski made A Short Film About Killing (three years before Double Life) his longtime DP Slawomir Idziak said he would only make the film if he could use a number of filters to make the film look ugly and unattractive, a condition to which Kieślowski reluctantly agreed. Flash-forward to Double Life, and those same techniques used to make A Short Film About Killing ugly make Double Life beautiful. Idziak uses a golden-yellow or green filter through much of the film, in both interiors and exteriors, and the characters and sets are often times bathed in the same light, which contrast starkly with the reds of the costumes and sets.

That the same techniques can create opposite impressions is almost certainly a testament to the skill of Kieślowski, Idziak, and the rest of their crew, who must demonstrate a precise manipulation of mise-en-scene to create opposing sensations. Nearly any frame of Double Life could be blown up and hung on the walls of an art gallery, a statement that arguably holds true for their next collaboration, Blue, and even the rest of the Three Colors trilogy that followed. But these images alone are more admirable than lovable. Try watching Double Life on mute, and all of a sudden, the beautiful cityscape loses some of its magnetism. The performance of Irene Jacob is enough to brighten up much of the film, but the heavily filtered exteriors rely heavily on a mood created by the film’s music to obtain their beauty. As much as anything else, Double Life, a film notoriously difficult to pin-down, makes for a brilliant case study on how sound and image interact and rely on one another.

What makes this all the more remarkable is that Double Life is largely a transitional piece for Kieślowski, albeit perhaps the most fully realized one the cinema has ever seen. It is Kieślowski’s first film to not be produced entirely in Poland, being a Polish-French coproduction, a fact mirrored by the narrative. Jacob plays both the Polish Weronika and the French Véronique. Weronika is a singer who, almost by accident, finds herself becoming a lead soprano, only to collapse on stage, as if moved too much by the expressiveness of her own voice; Véronique feels a spiritual void when Weronika dies, gives up singing, and continues to teach music—the same piece Weronika’s symphony was performing when she died—to children. 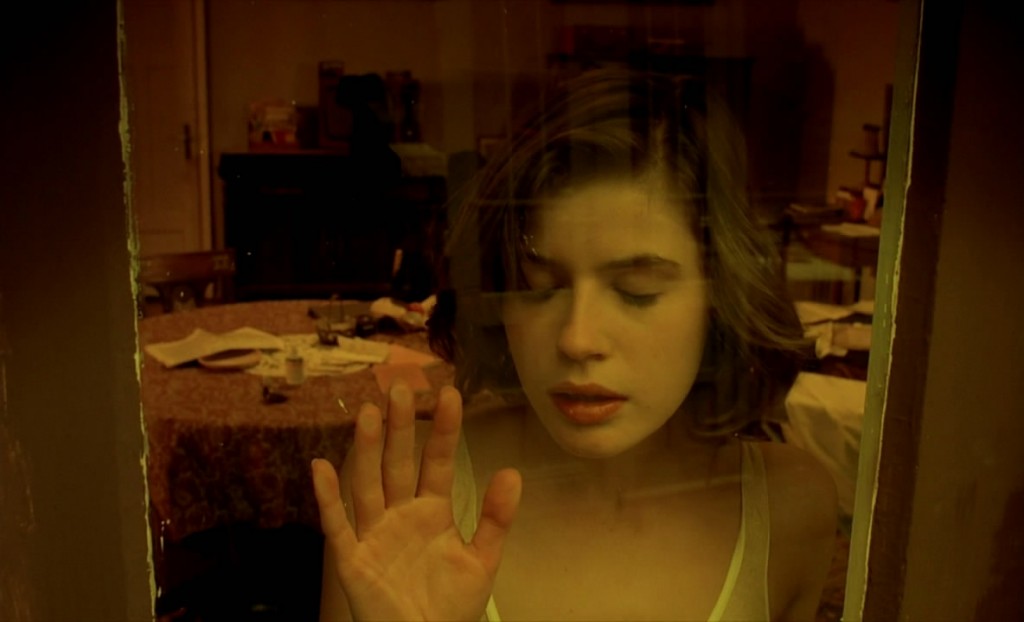 What emerges is two interconnected tales of love and art. Weronika, introduced joyfully holding a note far longer than her peers during a downpour, pursues artistry until it kills her; Véronique’s fate is more ambiguous, although to this viewer, she gives up art in pursuit of love, only to find herself being used by a man who loves his art more than her. At the film’s climax, Véronique finally meets the puppeteer for whom she has fallen, only to be told that he led her to him to determine the plausibility of one of his books. He pursues her and confesses his love, but last we see of him, he is literally turning her into a puppet, a tool to use for his own art. The emotion on his face is loveless and blank, as selfish and undetermined as his lovemaking, and the film ends with Véronique returning to her family home, reaching out for a tree, as if literally searching for her roots. Unlike Blue, a film with which Double Life shares a number of similarities, Double Life is a tragedy (Blue, by contrast, has been called an anti-tragedy), one in which the pursuit of art leads to the destruction of oneself and the pursuit of love is fruitless.

But Double Life spends its runtime searching for a different kind of love. Love-making is among the first acts we see of both Weronika and Véronique, but Weronika quickly hops town to see her dying aunt, while Véronique, suddenly uncomfortable, leaves her ex and ends the film taking her hand to a tree in front of her father’s house. This final shot is the only one in the film that could be called blunt, as it serves literally as a family tree, and the conclusion that Véronique is connecting with her “roots” as she reaches out to it is not far away. Blue works in precisely the opposite way—stripped of her familial connection, Julie (Juliette Binoche) ends the film finally finding love. In both films, music (and art in general) serves as a metaphor for connection, but in Double Life it’s crucial that the shared song does not serve as a plot point. The two women never learn of the other’s association with the same song. It is a film of invisible connections, in which people resort to family as their sole means of finding love.

The political parallel here is that Poland was finally freed of communism, but Double Life serves to illustrate a nearly intrinsic distrust, borders never being crossed, ending with a return to the roots. Blue saw this skepticism being overcome in its ending, White depicts the literal crossing of borders, and Red demonstrates a much broader form of connectivity in its eavesdropping plotline and its ending. Despite Kieślowski’s disavowing of politics—and by extension, one can safely assume political interpretation—his four final works, taken as a whole, constitute if not a gradual political acceptance and equality, a deeply lyrical look at love and connectivity, each one taking it a step further than the previous (White, despite being the relative punching bag of the group, features the most tragic ending of them all, illustrating the utter loneliness and regret that plague a life without love in its final close-up of Karol Karol; in some ways, the most radical and unique of the four pictures) and each unable to completely escape the politics of the era despite Kieślowski’s wishes.

Perhaps these interpretations are spilling out the seams of one picture, too insistent on rationalizing emotion, or too dependent on other films. There is a shot in Double Life in which Weronika and Véronique nearly meet and Véronique snaps a picture of her double. A political rally is depicted in that scene, although neither character nor the filmmakers pay any attention to it. Their minds are elsewhere. Yet that the two cross in a politicized space cannot be dimissed; Weronika and Véronique, Poland and France, are connected here by politics, however invisible, regardless of the sensation the aesthetic beauty of the film bestows upon its viewer. The shot then, serves—or at least can be taken as—a microcosm of the film (and its successors) as a whole. Or not. Either way, Double Life remains an enchanting film.