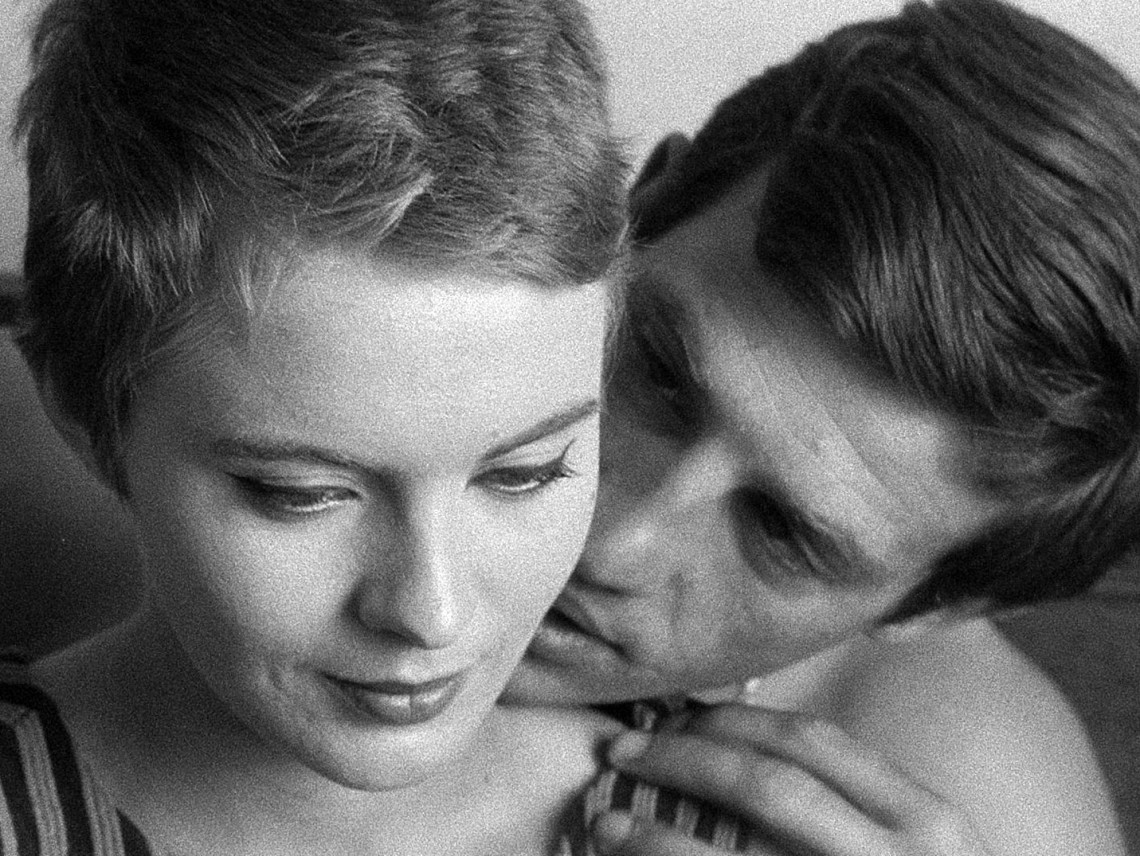 The definitive film of the French New Wave, Breathless set the bar for everything that was to come. Nothing since has drastically changed the way films are concocted quite like this 1960 gem. For all its many accomplishments, the film itself is a miserable affair. The characters are all detestable and their actions carry little significance. Whatever I may think of it critically, Breathless remains a landmark achievement.

Breathless hits the ground running and quickly develops the central conflict. Michel Poiccard (Jean-Paul Belmondo) is in the middle of stealing an automobile. What seems like a routine job, quickly turns into a manhunt. Director Jean-Luc Godard cut scenes at a ridiculously fast pace almost emulating, the exact pace at which Poiccard lives his life.

While on the lam, Poiccard makes visits to acquaintances of his to beg, borrow, or steal enough money to get out of town. The only thing that seems to stop him in his tracks is a young American woman. Patricia Franchini (Jean Seberg) is trying to hawk the Paris edition of the New York Herald Tribune to pay for her studies at the Sorbonne. She has captured the attention of Poiccard and might be the only thing keeping him around.

Above all else, Breathless is known for its unique usage of jump cuts. For reference, a jump cut is two sequential shots of the same subject that are taken from camera positions that vary only slightly. It is used to abruptly show the passage of time as opposed to using a dissolve like most films that pre-date Breathless would use. When Jean Seberg is seen riding in a convertible during the film, the cuts are intentionally jarring. The usage of jump cuts wasn’t initially conceived as a monumental new way of filming, it was simply used to trim down some of the runtime of the film. Godard believed it made for more interesting conversations, cutting out a lot of filler that typically inhabits films.

The cast and crew of Breathless reads like a who’s who of French New Wave. Directed by Jean-Luc Godard, who would go on to create other classics such as Vivre Sa Vie and Pierrot Le Fou, it was also written by François Truffaut. While Americans will most likely remember Truffaut from his brief appearance in Close Encounters of the Third Kind, Truffaut directed his own masterpieces with The 400 Blows and Jules and Jim. With his breakthrough in Breathless, Jean-Paul Belmondo came to be considered the linchpin of French New Wave cinema. Never mind the inclusion of director Jean-Pierre Melville who plays a famous writer interviewed by Jean Seberg’s Patricia.

Michal Poiccard is the typical fraternizing male that he has idolized in the many films of Humphrey Bogart. He even declares his own feelings on the matter in one of Breathless’s earliest lines, “After all, I’m an asshole. After all, yes, I’ve got to. I’ve got to!” In one of the more iconic scenes in the film, Patricia returns home to find Michel undressed in her bed. Michel’s main goal throughout the early part of the film is have Patricia sleep with him. Patricia is confused about how she really feels about Michel and strings him along until she finally gives in. It’s one of the longest scenes in the movie, but yet it only showcases the cat and mouse game between the sexes.

When it comes right down to it, Breathless as a narrative film can be easily defended as a heist film. As far as that genre goes, it inspired Bonnie and Clyde and Badlands, among many others. There isn’t some kind of alternate meaning or big think pieces that can be derived from the film, but perhaps that’s not what makes the film memorable. Breathless really paved the way for a new type of thinking and established the French New Wave era. What was once an enjoyable film, has now taken on a much more iconic stature. No matter what I think of Breathless as a film, there’s no denying what effect it has had on cinema.