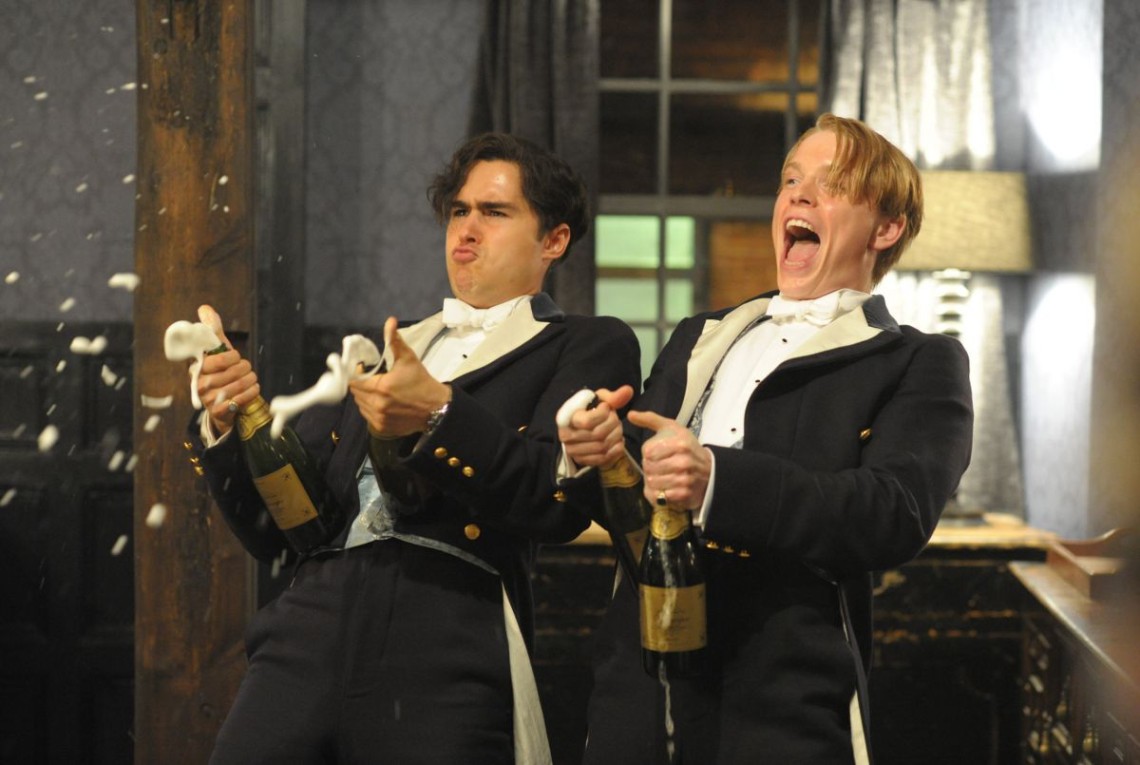 Lone Scherfig’s new film name-drops its own title so many times that it very nearly verges on self-parody. If a tenacious viewer felt so inclined, they could make a super-cut of every time anybody on screen coyly huffs and puffs about the eponymous ultra-exclusive “riot club,” and it might last several minutes; the club, a private, all-male social group for spoiled rich boys, is spoken of with the same hushed reverence reserved for, say, the Wizard of Oz, and in mischievously pompous tones. But then again, in accordance with the film’s characters’ massive collective ego, maybe that’s exactly the point. The Riot Club! It’s an invocation promising privileged mayhem.

The Riot Club, a play Scherfig adapted to the screen with the aid of its architect, Laura Wade, feels like the British cousin to The Wolf of Wall Street. Their combined efforts are reserved by comparison, but the film nonetheless has all the power needed to make your skin crawl. Here, the action occurs within the hallowed halls of Oxford University rather than the world of New York finance; our principal cast is composed of children, or young men who act like them in their pursuit for the ultimate self-agency. We’ve seen these characters before. Like so many people in the real world, they believe the size of their parents’ coffers entitles them to do what they want, when they want, and to whomever they want. In short, they’re monsters, but well-dressed, moneyed monsters, which arguably are scarier than the kinds born with horns and fangs.

Primarily, we’re stuck with the club’s two newest members: Miles (Max Irons), a left-leaning student who we immediately identify as our audience surrogate, and Alistair (Sam Claflin), who is essentially Miles’ wicked foil. They’re both well-off, smart kids, and they have so much going for them that one might be forgiven for questioning why they bother with the club in the first place. In truth, their patronage is really just an act of seduction carried out by the rest of the group, comprised of the likes of Ben Schnetzer, Douglas Booth, and Sam Reid. The film is a who’s-who of hot, young, up and coming British talent, which feels eerily appropriate for a story about wealthy youth on the rise.

The film feels remarkably low-stakes to begin with. Miles and Alistair clash, the former developing an infatuation toward another first-year student, Lauren (Holliday Grainger), who feels like a balancing influence on him until she’s not. Grainger is one of the picture’s three major actresses alongside Jessica Brown Findlay and Natalie Dormer; Grainger has the largest part of the trio, which is a nice way of saying that she still doesn’t have a lot to do. That, however, is a-okay in a critique of male arrogance and dominance. Women are therefore either relegated to the background, or they stick around just long enough to grow fed up with the guys’ boorish behavior, which comes to a shocking head around 45 minutes into The Riot Club’s running time. Here, the film picks up, and we wish the lead-in had been cut down ever so slightly. This is the wanton stuff we’re here to see.

Most of the story concerns itself with Miles’ and Alistair’s initiation into the club. The middle, however, shows us exactly what the club is all about, expanding on earlier obnoxious behaviors with grotesque results. Once the boys arrive at an isolate gastropub for a long-planned dinner, everything goes downhill, and your stomach may churn as we see the upper class unhinged. This sequence showcases everything that makes The Riot Club horrifically effective: in dissecting the club’s lifestyle, it reminds us that being rich really is better than being poor. You can maim a man in public, destroy public property, sneer at the world around you while giving it the finger, and merely be kicked out of school. Scherfig and Wade make no endorsement, but rather display the libidinal, self-indulgent chaos frankly and without comment. They don’t need to comment. The material is comment enough.