“The Last of the Unjust”: Mythology and Reality, Thoughtfully and Harrowingly Exposed

Culled from the very first interviews Claude Lanzmann conducted for his landmark Shoah, The Last of the Unjust focuses on one man in isolation, Benjamin Murmelstein, last of the Elders of the Jewish Council of the Theresiensadt ghetto near Vienna. The film presents footage of Lanzmann’s 1975 interviews joined with present-day shots of Lanzmann roaming the areas described by Murmelstein while reading from his own notes as well as excerpts from the man’s autobiography. Shoah was a film of death, mired in the unending, ever-fresh memories of witnessed, and perpetuated, atrocity. But the director’s latest film only compounds that sense of decay, with Lanzmann using his own body as a vessel for the long dead rabbi. His own quest to put the puzzle pieces back together is as haunting as the harrowing testimony of his magnum opus.

As with Shoah, The Last of the Unjust nominally unfolds as a series of talking heads, albeit with the number reduced to one in this film. In the old footage, Murmelstein talks at length about his experiences. A controversial figure for working for Nazis, Murmelstein uses these interviews for extended self-apologia, explaining his feelings of being trapped in an impossible position even as he did what he could manage to save people. His own recollections of having to serve Eichmann particularly raise sympathies, as he describes a sadism on the Nazi’s part that renders Hannah Arendt’s famous declaration of his banal villainy ludicrous, as well as casting the rabbi’s ability to make some small difference and to ward off more than one rampages nothing short of heroic.

As he goes on, however, the contradictions begin to reveal themselves. Murmelstein notes the structural evil of the bureaucracy set up for no other purpose than to offer Jews false hope while stealing whatever possessions still remained to ghetto inhabitants. Yet Murmelstein himself gradually reveals a pride for his own ability to keep things running smoothly, and at times he speaks of forgoing the chance to escape by pointing to the responsibility of his work, something that Lanzmann picks up on and presses on Murmelstein. The director asks the rabbit if he enjoyed power, to which Murmelstein responds that it would be hypocritical of him to say no. 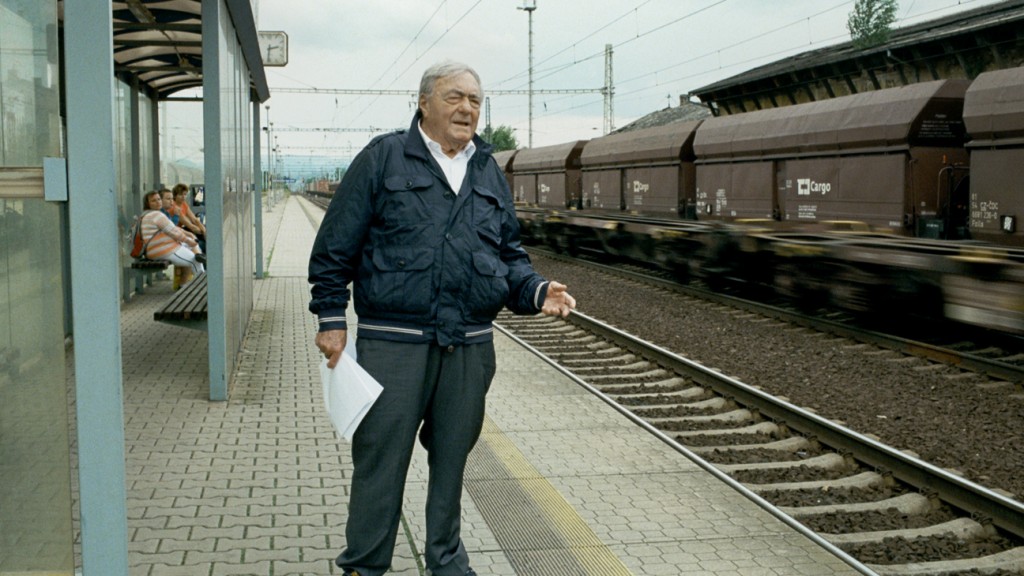 This can make for dry commentary, but Lanzmann’s direction is, as ever, as thoughtful as his questioning. In the recently shot footage, the director walks through the placid streets of the old ghetto, walks up stairs to get to the room where dozens of Jews were left to all but literally rot, strolls around the grounds of the local fortress, now in a state of being reclaimed by nature. The overall impression is of exploring a ghost town, the weight of suppression and denial giving an otherwise gorgeous Viennese town the feel of Chernobyl, haunted by a spectra with a horribly long half-life.

The film’s extreme length is not as flowing and entrancing as the twice-as-long Shoah, yet it serves the purpose of showing how deep Murmelstein’s self-delusion and compartmentalized guilt runs. The rabbi’s statements are not whittled down to his self-justifications but spread out to cover his daily administration in great detail, the ways in which he had to organize some kind of normal hygienic response to the inhumanity of overcrowded attic slums of invalids.

By including tidbits such as Murmelstein’s prideful boast of containing an epidemic and his matter-of-fact cataloguing of death, by contrasting things for which he takes credit along with that for which he takes responsibility, the film muddles a simplistic reading of the man as either tragic hero or witting villain. Organizational to his core, with just enough irony in him to expose his fragile sincerity, Murmelstein may conform to the notion of the banality of evil more than Eichmann. That’s not to say he’s truly bad, but that his own complicity in that which he tried to make as good for his people as possible paints his good intentions ambiguously; as Murmelstein says of some unfortunate, imperfect souls, one can be a martyr without being a saint. It’s a lesson that applies equally to Murmelstein, but one that the man, who even mines mythology and literature for parallels that remind him that his sins are not exclusive to him, does not seem to have accepted before his death. As such, his late life can feel as mangled and destroyed as the deaths of those under his powerless, watchful eye.

2 thoughts on ““The Last of the Unjust”: Mythology and Reality, Thoughtfully and Harrowingly Exposed”