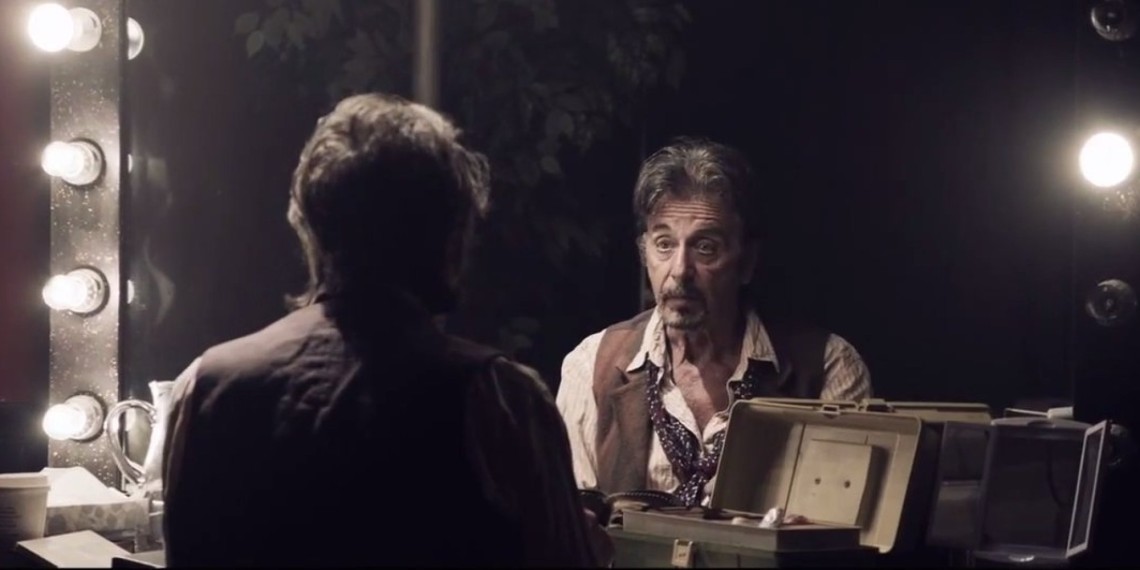 All the world’s a stage for legendary actor Simon Axler, and he wants to get off. Played with no small amount of self-deprecating wit by the even more legendary Al Pacino, Simon has of late – but wherefore he knows not – lost all his mirth. Pushing 70, without any friends or family of which to speak and on the skids of a once-brilliant career, our master thespian picks a prime moment during a Broadway production of As You Like It to hurl himself into the orchestra pit. “Sans eyes, sans taste, sans everything–” SPLAT!

Alas, he survives. So after trying out a few different anguished moans for the ER nurses (Simon felt the first one didn’t sound convincing and politely asked for another take), he heads home, only to botch a shotgun suicide attempt inspired by one of his idols. “Hemingway must have had longer arms,” the famously short-statured Pacino riffs with the barrel in his mouth, unable to reach the trigger.

Thus begins The Humbling, director Barry Levinson’s mordantly hilarious adaptation of Philip Roth’s widely despised 2009 novella. A micro-budget labor of love for Pacino and his pals, the film was shot incrementally in 20 days over the course of 3 months, mostly in the director’s own house. Screenwriters Buck Henry and Michael Zebede have stripped away the ickier elements of Roth’s dirty-old-man fantasy while ramping up the droll, dark comedy of indignity at its core.

The result is a slippery phantasmagoria drifting between dreams and reality, not always elegantly. The Humbling is a messy movie but also a thrilling one — grappling with diminished talents and vanishing virility in brutally honest ways that show up the similarly-themed Birdman as a cheap parlor trick. (For starters, this film mocks the main character’s narcissism instead of celebrating it.) It’s also screamingly funny, and as Shakespeare reminds us: in jest, there is truth.

A monthlong stay in a mental institution doesn’t do Simon Axler much good. Group therapy hardly helps with such a ham (Levinson wryly never shows us the other patients, while Pacino prattles on and on) and Skype sessions with his therapist (Dylan Baker) are sabotaged by the actor’s own admission that if he sees a camera, he can’t help but perform for it.

Soon Simon is alone again in his vast and barren Connecticut mansion, where he never even goes upstairs. (“It feels like a New York apartment if I just stay down here.”) That is, until a surprise visit from Greta Gerwig’s Pegeen — the estranged goddaughter he hasn’t seen since a falling out with her parents twenty-odd years ago.

Pegeen’s a piece of work. Putting a sardonic spin on Gerwig’s usual pixie persona, she’s an embittered lesbian drama teacher shacking up with the dean at a nearby women’s college. He’s besotted by her no-bullshit candor, and Pegeen’s near-constant barrage of put-downs leaves Simon as surprised as we are when she abruptly jumps his creaky old bones.

Simon knows that Pegeen is gonna be way more trouble than she’s worth, but he follows his dick into oblivion all the same. Few actors are better at being lovestruck than Pacino, with his crinkly smile and hangdog eyes. He shuffles through The Humbling in flowing frocks with a mane of tousled hair, the character’s air of addled confusion camouflaging the exquisite physical precision of this performance. Al’s coming off a rough decade or so on the big screen and it’s a joy to see him energized again, unleashing a hundred sublime variations on the befuddled reaction shot, while also bluntly and heartbreakingly re-appraising a life of wasted opportunities.

Complications ensue, the actor’s empty estate suddenly crowded at all hours by visits from Pegeen’s scorned sugar mama (Kyra Sedgwick), her old girlfriend who is now a man (Billy Porter), and even her rampaging, furiously disapproving parents (Dan Hedaya and Dianne Wiest). There’s also a woman he met in the booby-hatch who keeps trying to hire Simon to kill her husband, and his prim and proper English maid has taken to polishing Pegeen’s sex toys as if they were fine tableware.

Of course, a lot of this stuff probably isn’t actually happening. Simon’s grasp on sanity was tenuous to begin with, and anxiety breeds surreal hallucinations when he attempts to salvage his sagging finances by mounting the boards as Lear one more time. (It was either that or a hair-replacement commercial, and an agent played by Charles Grodin deadpans that ever since Spider-Man: Turn Off the Dark, Broadway audiences will turn out in droves if they think they might get to see an actor fall off the stage.)

Levinson isn’t enough of a visualist to handle the script’s Fellini-esque dreamscapes, especially not on this non-budget. But what he lacks in style, he makes up for in urgency. Like Pacino, Barry Levinson is coming off an awfully long string of artistic duds, and this movie feels intensely personal — like the next-to-last roars of a couple of lions in winter.

Everything in this movie was earned the hard way.

One thought on ““The Humbling””