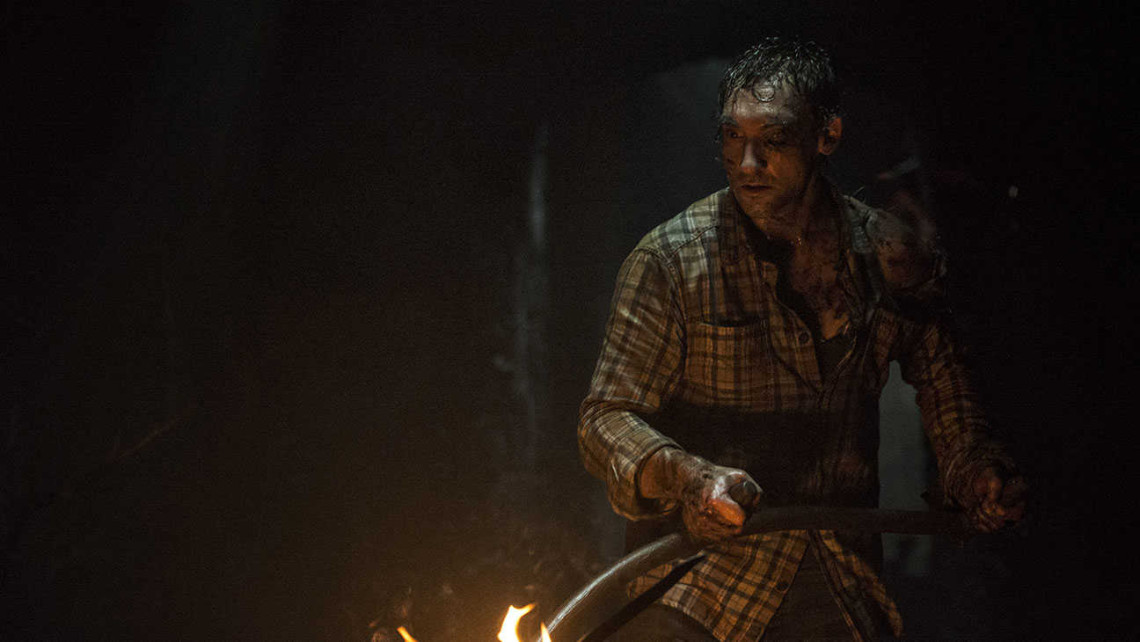 “The Hallow” Is Chillingly Effective

If you’re the type of person who avoids setting foot in a forest, you’ll probably feel validated by The Hallow, the debut from Irish filmmaker Corin Hardy. This is a horror film that treats the natural world as a source of mortal danger. Here there be monsters, yet Hardy’s macabre aesthetic lends even an undisturbed bosk a sense of foreboding.

The Hallow takes place in Ireland’s verdant, unspoiled countryside, where a conservation surveyor, Adam (Joseph Mawle) has relocated from London with his wife, Claire (Bojana Novakovic), and their son. Their new domicile is a worn-down old cottage set along the edge of nearby timberland, which Adam is inspecting in the interest of commercial construction. The film’s opening smartly explains to us, through car radio broadcasts, that custodianship of the woods has changed over from the public to private entities. Adam’s just there to mark which trees can rightly be felled, though the correct number turns out to be “none,” as the woods are inhabited by ancient spirits who look unkindly on trespassers.

The tally of antecedents The Hallow owes a debt to is rather large. The film combines a handful of different horror niches into one beautifully stylized package; it’s a haunted house joint, a fish-out-of-water yarn, and a monster movie all at the same time. (Think Poltergeist by way of Pumpkinhead with a dash of The Hills Have Eyes and a pinch of Paranormal Activity.) Hardy, though, isn’t just playing around with pastiche. He’s cobbling together a framework of his very own while dismissing bad genre tropes. If you’re even a casual horror fan, you’ve probably rolled your eyes once or twice at characters who refuse to leave the house when the house is very clearly a festering cauldron of evil. In The Hallow, this becomes almost literal with the gross, tentacular fungus that grows on the rafters in their attic. Adam and Claire determine to get the hell out as soon as the mandatory freaky stuff starts happening to them. The (narrative) problem is that they just don’t get very far.

There’s a lot to like in Hardy’s bag of tricks. He has an infectious love for horror that would likely keep the film aloft even if he lacked the talent to back that passion up. Better still, he has a personal stamp to put on well-tread plot elements. The Hallow is a fundamentally Irish presentation, a movie that improves in proportion to the viewer’s appreciation for its cultural folklore. That’s not to say audiences must brush up on fairy tales as a prerequisite, but it helps. But Hardy has imagination to spare. His monsters may spring from the fables of his homeland, but their design is all him.

That aesthetic is a huge component in what makes The Hallow so chillingly effective. How this film didn’t manage to secure a theatrical release in October is baffling, but as a pick-me-up for the post-Halloween doldrums, it’s a grim delight. As an alternative to watered-down mainstream horror fare, it’s even better. Hardy has vision and creativity to spare, as well as an eye for sharp, lush visuals, though you may be too busy quivering under the film’s spell to fully appreciate them.

3 thoughts on ““The Hallow” Is Chillingly Effective”