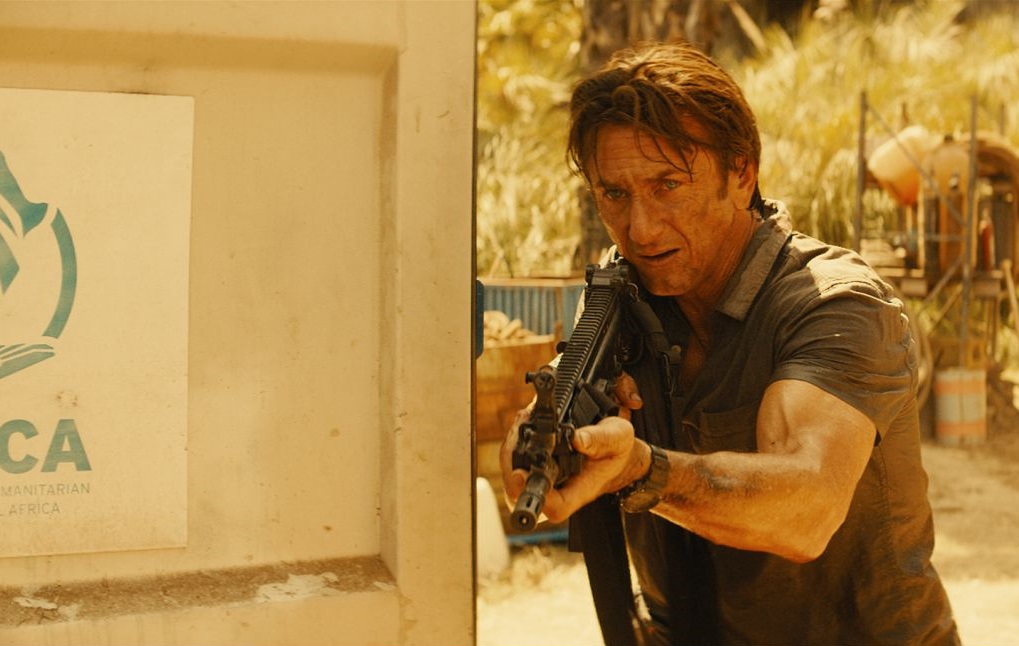 The Gunman is an odd hodgepodge of conflicting ideas. It’s adapted from an existentialist French crime novel from the 1980s, but turns it into a conventional action thriller that aims to please some crowds—workable. But onto that is grafted a twinge of social conscience. Which is still workable…but not the way this film tries to pull it off. Even that particular failure would be forgivable, though, if the movie spun that setup into a vector for interesting action. Alas, such pleasures are only sporadic, nestled in generic Euro-hopping beats.

In Jean-Patrick Manchette’s The Prone Gunman, protagonist Martin Terrier is a remorseless hitman who gets in over his head after refusing to take on an assassination gig. In The Gunman, Sean Penn’s Jim Terrier is a remorseful mercenary who goes on the run after blowback from an assassination he performed comes after him. What originated as a crime story takes on a sociopolitical flavor (likely at the behest of the famously activist Penn), as Terrier’s activities entangle him in corporate mining interests in the Congo—his victim was a government minister of mining. The assassination is shown to cause massive unrest in the country, presumably resulting in a good deal of death and destruction. And yet the movie’s focus and sympathy is for poor Terrier, who had to leave his girlfriend (Jasmine Trinca) behind when he went on the run. Boo hoo.

I’m willing to forgive a lot of moral fecklessness from an action movie, but it’s much less excusable when a film asks me to contemplate the effects of ruthless globalization while also attempting to elicit sympathy for one of the agents of said ruthlessness. And this isn’t some kind of moral complexity Trojan Horsed into a popcorn flick; The Gunman earnestly wants the audience to identify with, admire, and root for Terrier, and not dwell too long on the appalling actions that got him into this mess in the first place.

Still, an action thriller can commit such infractions and still walk away with a “not guilty” verdict. What it can’t get away with is tedium, which is caked thick on The Gunman. It sets up a fairly simple mystery—who’s after Terrier, and why—and overextends it through frequent, often redundant scenes of exposition. Javier Bardem shows up and acts drunk. Ray Winstone shows up and acts tough. Idris Elba shows up and does…well, nothing, sadly. Penn and Trinca sweet-talk one another without a hint of chemistry. Through it all, actual action scenes are terribly few.

What hurts all the more is that some of those action scenes are pretty terrific, far and away The Gunman’s sole saving grace. Terrier evades a squad of mercenaries in a country villa through Equalizer-esque ingenuity. He plays cat-and-mouse with two operatives in a hotel in a wonderfully suspenseful sequence. And the final showdown with the main villainous muscle is delightfully vicious. These are the scenes that don’t succumb to the unsteady camera effect — the rest, unfortunately, do.

Over the past few years, director Pierre Morel has made it his business to turn old men into action stars. But The Gunman lacks the all-killer, no-filler efficiency of his biggest success, Taken. Trying for imitation-The Constant Gardener waters down its violence and stuffs its story with fat. Overall, the film can be summed up by its climactic fight, which goes a long way toward building up delicious anticipation for the villain getting gored by a bull, only for him to be trampled instead. It’s a weak payoff that you know could have been more viscerally satisfying if it had just committed to the brutality.