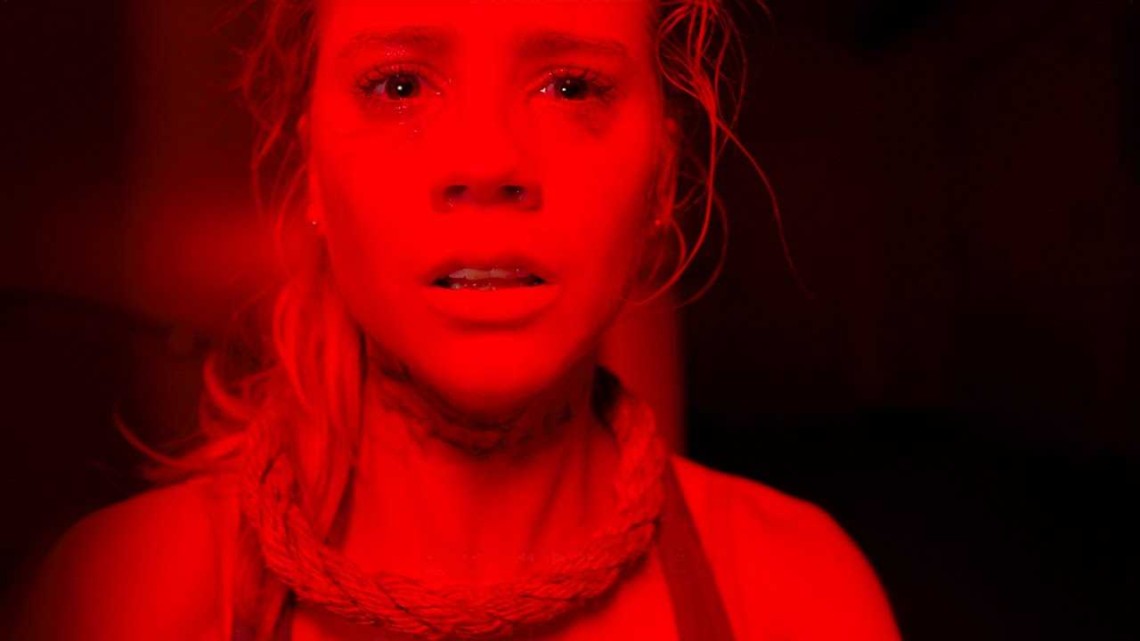 Congratulations, The Gallows: You’re this year’s As Above, So Below, which means that you’re this year’s Chernobyl Diaries, and on and on throughout found footage’s rich history as a hotbed for horror hack-work. (For every Trollhunter, there’s an Apollo 18. For every Creep, there’s…well, something like this.) It doesn’t take much to make found-footage movies – if The Gallows doesn’t prove that, its ancestors sure do – but it takes a lot to make them work. They need a core of internal logic, for one thing, and it helps immensely to give half a damn. Writer-director team Chris Lofing and Travis Cluff barely even muster a quarter-damn, if that. Frankly, the very idea that this movie needs more than one person to either write or direct it is laughable.

The Gallows shamelessly riffs on two genre cornerstones: The Phantom of the Opera and The Blair Witch Project. The trouble, of course, is that the former is an untouchable classic of cinema while the latter suffers from age; audiences have theoretically wised up since 1999, so the tricks Daniel Myrick and Eduardo Sanchez brought to bear 16 years ago don’t have quite the same effect on us now as they once did. We know their game. Sometimes, smart filmmakers can change the game, as Gareth Evans did in 2013’s V/H/S/2. But Evans aimed for Grand Guignol, while Lofing and Cluff settle for Scooby Doo by way of Friday the 13th.

So they lock a handful of teenagers in a haunted high school and hope for the best. The Gallows begins in 1993, when the school play ends with a freak accident that leaves its star dead; from there, we leap ahead two decades, and the theater department is attempting to revive that production for the 20th anniversary of the tragedy, a monumental task given that the play’s cast is littered with idiot jocks like Ryan (Ryan Shoos) and Reese (Reese Mishler). Ryan, the jockier of the two by far, decides to sabotage the play, ostensibly to spare leading man Reese the embarrassment of choking in front of an audience, by sneaking into the school at night and wrecking up the stage. Truthfully, Ryan is a vindictive twerp, and as the film’s de facto narrator (he carries a camera with him everywhere he goes, yet he has the gall to pick on theater geeks), we kind of can’t wait for him to get bumped off.

Once Ryan, Reese, Ryan’s girlfriend Cassidy (Cassidy Gifford), and Reese’s co-lead, Pfeifer (Pfeifer Brown), wind up in the school’s auditorium, doors lock on their own and trap them inside, where they’re prey to a lurking spectral hangman. The rest is slash-by-numbers, though the hangman himself may be the lamest big bad in horror’s recent memory. “Jason had his machete,” TV spots tell us. “Freddy had his glove.” Charlie has a noose, which is gruesome in a historical context but makes for a laughably limp device within the visceral context of horror. There’s nothing scary about Charlie; he’s basically the Whip Master of slasher canon.

Buffering Charlie’s ineffectuality as a masked maniac, though, is The Gallows’ absolute incompetence as a movie. Many found-footage movies confuse “atmosphere” and “scares” with “pointing the camera at nothing” or “waving the camera wildly all over the place,” all the better to create a sense of immediacy, but “better” is too strong a word. The problem with staring at the floor or flailing like a beached dolphin is that obscured visuals aren’t frightening. They’re annoying, like everything else about this film. The Gallows commits no crime that its peers haven’t already; ravaging it for meeting mainstream standards, then, feels sort of cheap. But when indie horror can make the aesthetic work on even less of a budget, there’s no excuse for this level of failure outside of sheer apathy. This is what not trying looks like.