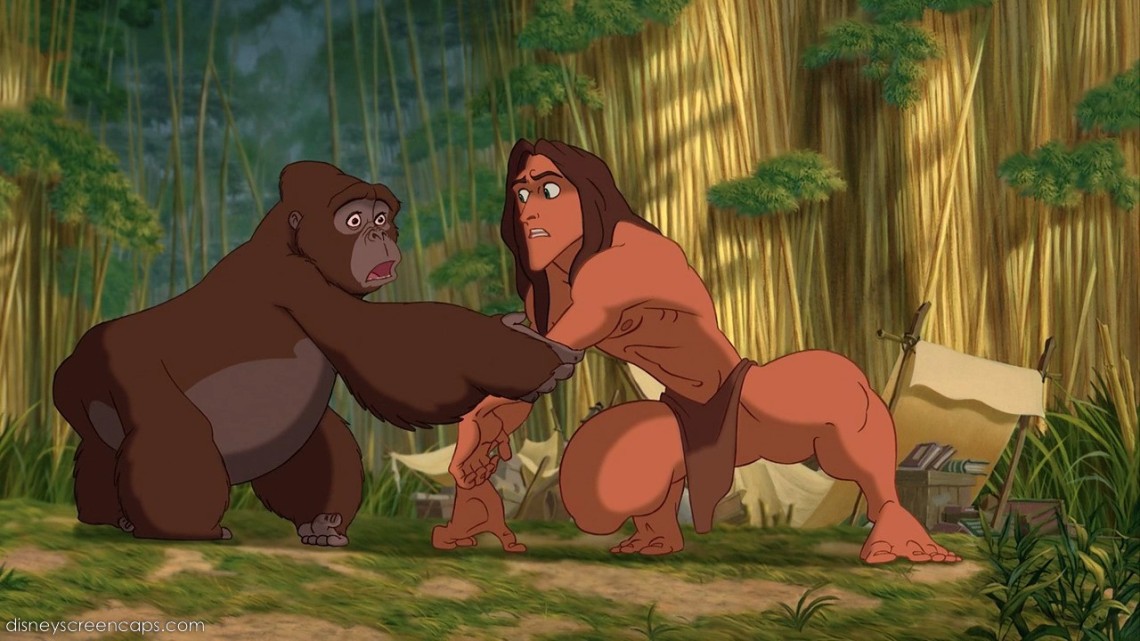 Many people would argue that Tarzan represents the end of the Disney Renaissance (Those people would be incorrect; it’s Fantasia 2000, which opened about six months after this film). It certainly represents the danger of combining so many familiar elements into one story: the pop-star-driven songs of The Lion King (though they’re utilized à la Randy Newman’s songs in Toy Story), the threat of civilization in the form of burly white men from Pocahontas, the coming-of-age story of a larger-than-life figure of myth from Hercules, and so on and so on. Fifteen years after its release, Tarzan isn’t a weak effort from Disney animation like Treasure Planet or Atlantis: The Lost Empire, but it’s so familiar in its tone, scope, and style that it almost fades into the background without even trying.

Arguably, the most thrilling element is that of the eponymous vine-swinger careening through the jungle with deft ease. The various scenes when Tarzan, either by himself or accompanied by his love interest, Jane (voiced delightfully by Minnie Driver), hops, skips, and jumps from branch to branch are the highlight of the picture. And though they’re somewhat inconsistently employed, Phil Collins’ songs are catchy, if not nearly as memorable or iconic as anything from the early half of the Renaissance period. (Your mileage may vary, granted, because these are Phil Collins songs through and through, Disney movie or not.)

But the major conflict, similarly to that of Hercules, doesn’t get introduced until 30 minutes in, thus making it rushed. Tarzan isn’t the first film of the Disney Renaissance to seem too much like its predecessors, but there’s nothing remotely singular about the picture, unlike late-period efforts like Mulan or The Hunchback of Notre Dame. Adapting a ripping adventure yarn is all well and good, and visually, Tarzan is fast-paced and thrilling. But the story that takes place when Tarzan puts his feet on the ground is less involving (And the less said about Rosie O’Donnell’s Terk, the better. Trashing the camp, indeed).

Tarzan, like the Hercules Blu-ray release this week, has been upgraded to high-definition in a solid if not remarkable transfer. Unlike the older Disney releases this week, Tarzan wasn’t badly in need of the upgrade. hat isn’t to say the video quality is unimpressive; it’s suitably bright and crisp in the colors, though sometimes whatever hand-drawn imperfections or grain that may have been apparent in 1999 are absent. The audio is more notable, as should be expected; from Tarzan’s signature yell to the music to the sounds of the jungle, Tarzan is a booming affair.

Here’s the glass-half-full or half-empty scenario: if you (like me) have never owned Tarzan on DVD, guess what? There are a heaping helping of special features on this Blu-ray, including an audio commentary, song demos, behind-the-scenes looks at each of the main characters from design to completion, and more. But if you’ve owned either two-disc DVD edition of this 1999 film, there’s nothing in the bonus features that you haven’t seen already. The problem Disney has regarding its extras of older films is that many of its initial two-disc DVDs are so chock full of supplements that most HD transfers are content to simply regurgitate the old instead of creating something new.

Yet even though there’s nothing new, this much is true: Disney gave a lot more attention to Tarzan in its initial home media release than, say, Hercules, whose three special features could all fit inside of the demos of songs written and performed by Phil Collins, let alone the bevy of other extras. Though none of these extras have been upgraded to HD, they’re all fascinating to sit through if you want to know how this particular story came to be, and in such unique circumstances (Tarzan was animated by groups working in California and Paris, teleconferencing on a daily basis to make sure they were all on the same page). It would be nice if there was something new for this Blu-ray, but the old stuff that’s there is fairly impressive if it’s new to the owner.

The iconic Edgar Rice Burroughs character is the centerpiece of a moderately decent Disney animated film, but the Blu-ray is for completists and die-hards only.