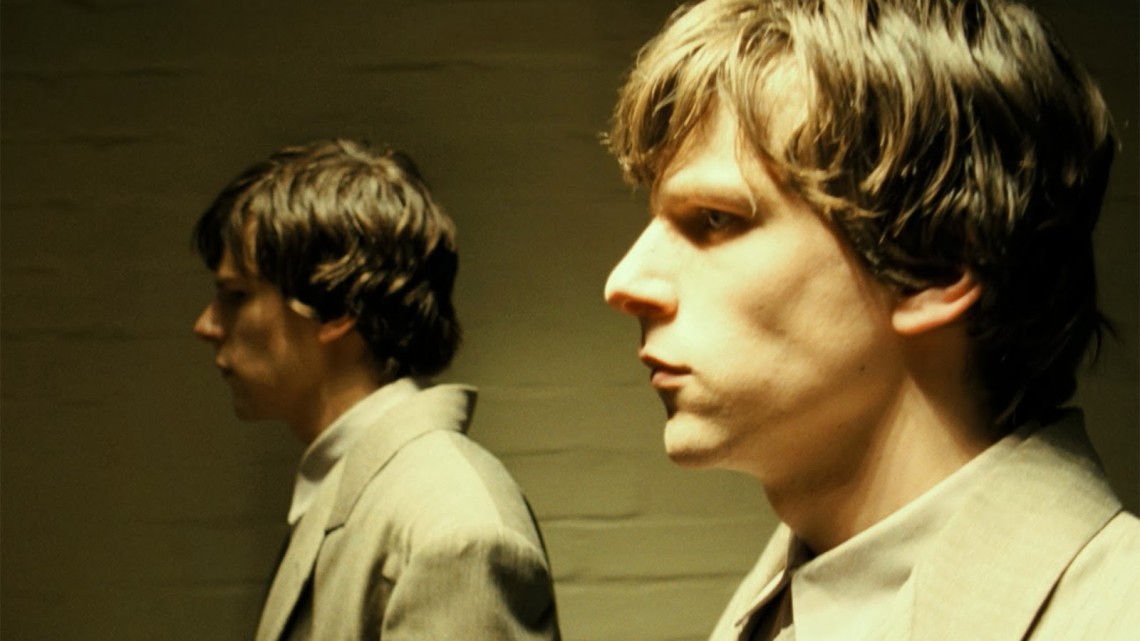 Best known for his side-splitting character Moss in The IT Crowd, Richard Ayoade surprised audiences in 2011 with his more serious festival submission Submarine. The film was about a young boy trying to reunite his parents after their separation.

In his new film The Double, Ayoade once again takes a dark subject to a hilariously uncomfortable place. Based on the unfinished novel by Fyodor Dostoyevsky, The Double records the smooth slip into hysteria that accompanies a person who has met their doppelgänger. Jesse Eisenberg takes on the challenge of playing the two lead characters, Simon and James. Simon is reserved and hardworking, while James is outgoing and lazy.

Eisenberg plays both roles very well, able to both act and react as he transitions from the meek and trounced upon Simon to the boisterous and popular James. His performance is aided by Mia Wasikowska, Wallace Shawn, Noah Taylor, Cathy Moriarty,  James Fox, Craig Roberts, and Yasmin Paige, their characters foiling Simon as they each try to satisfy their one want–they exist with no duality.

Coming from a directorial repertoire of music videos, Ayoade has a very stylistic presence and fantastical composition. He favors a closed frame when Simon is the subject to demonstrate his constrained nature and physical awkwardness, while James usually gets a wide angle and open frame to symbolize the opposite. His composition is cramped and claustrophobic, and the production design is a hodgepodge of colors and textures meant to evoke feelings very quickly. Low-key lighting accentuates the gloomy nature of Simon’s world and creates sharp contrasts that parallel the contrasts between the two lookalikes.

The duality of comedy and tragedy is demonstrated in a scene in which Simon needs James to tag team a date with Hannah (Wasikowska). James, the more charismatic of the two, first offends Hannah then steals her away. The whole scene is shown through Simon’s point of view as he tries to listen to what James is saying. He hears nothing as the waiter keeps turning on blenders, and the restauranteurs cheer while James exits with the girl.

This film embodies dark comedy. Mentions of suicide, stalkers, and identity crises often provoke awkward laughs. Ayoade is able to blend a very tragic circumstance with a very comedic irony. Rather than tip-toeing around a serious subject to avoid being thought irreverent, he blazes right through a sensitive subject and garners many guilty laughs along the way.

One thought on “Sundance Review: ‘The Double’ Does Dark Comedy Right”