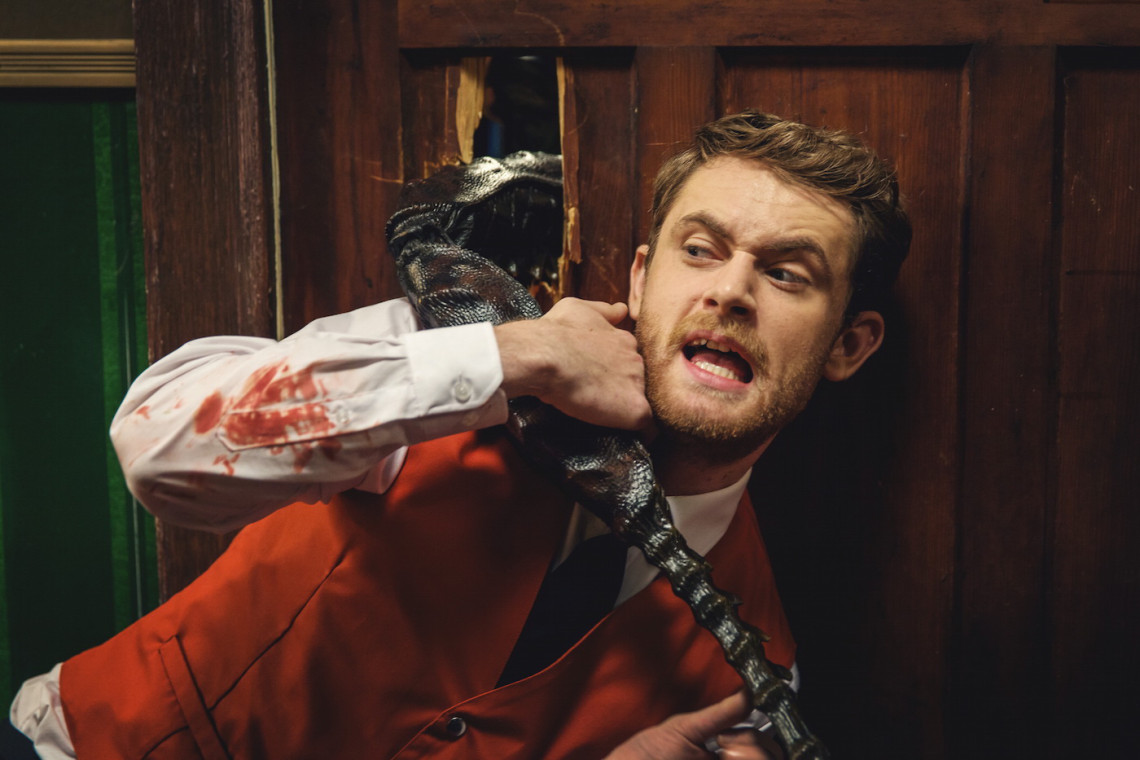 In the vast and varied catalog of horror film villains, giant bugs have historically been paid little respect. Big damn insects tend to be B-movie fodder for Mystery Science Theater 3000 or drive-ins. If Benni Diez’s Stung proves anything, it’s that relegation to horror’s minor leagues is A-OK. Unlike so many recent high-profile horror projects, such as this year’s breakout hit It Follows or the less-loved Unfriended, Stung coasts on its straightforward retro charm instead of genre deconstruction. It’s a creature feature calibrated to satisfy much simpler, old-fashioned pleasures.

The pesky creatures in question—wasp-like monster pests—mysteriously descend upon the yearly garden party celebration thrown by wealthy eccentric Mrs. Perch (Eve Slatner) and her timid son, Sydney (Clifton Collins Jr.), at their estate. The event is being catered by Julia (Jessica Cook) and Paul (Matt O’Leary). Julia’s desperately trying to make her business a success while Paul more or less just wants to get in her pants. But Julia’s and Paul’s respective hopes are dashed when the Perch soiree turns into a feeding ground for enormous, vicious wasps that breed through the gory magic of host gestation.

Stung has a good time. Better still–we get to have a good time with it. (And in a grand casting coup, the legendary Lance Henriksen plays the local mayor, though he’s characterized primarily through his fondness for booze and hors d’oeuvres.) The punchline to the film’s gloriously cheesy wiseass conceit says it all: Mutant wasps devour hapless rich people. Diez brings breezy good humor to his set-up that makes the 20-minute wait for havoc worthwhile on its own merits. When all turns to splatter—and let it be said that Stung is indeed one of 2015’s flashier exhibitions for graphic human evisceration—he shows his true brio. Diez barely takes his foot off the gas for more than a handful of moments until Stung’s final beat. When the film does slow down, it’s only for long enough that Henriksen can get all avuncular on O’Leary while the perpetually sweaty Collins Jr. twitches ominously in the background.

The cast is committed, but Stung’s real stars are its monsters. It’s the fashion among critics to deride the use of CGI in the movies, and for good reason: all but the best CGI gives itself away too easily to the human eye. But Diez appreciates the tactile presence of a traditional, tangible beast. Practical special effects rule on his set, and in the rare moments where he does lean on computers, it’s brief and only in service to motion. Scuttling wasps are ever so much easier to fashion with iMacs than with animatronics, after all, and besides, Diez is smart enough to make sure his cast never has to interact with pixels. Movies about flesh-eating wasps don’t have to look goofy and fake, Stung tells us. They don’t have to be po-faced and self-serious, either. Diez strikes the right balance between both of these axes. His film might be slim, but it isn’t short on entertainment.