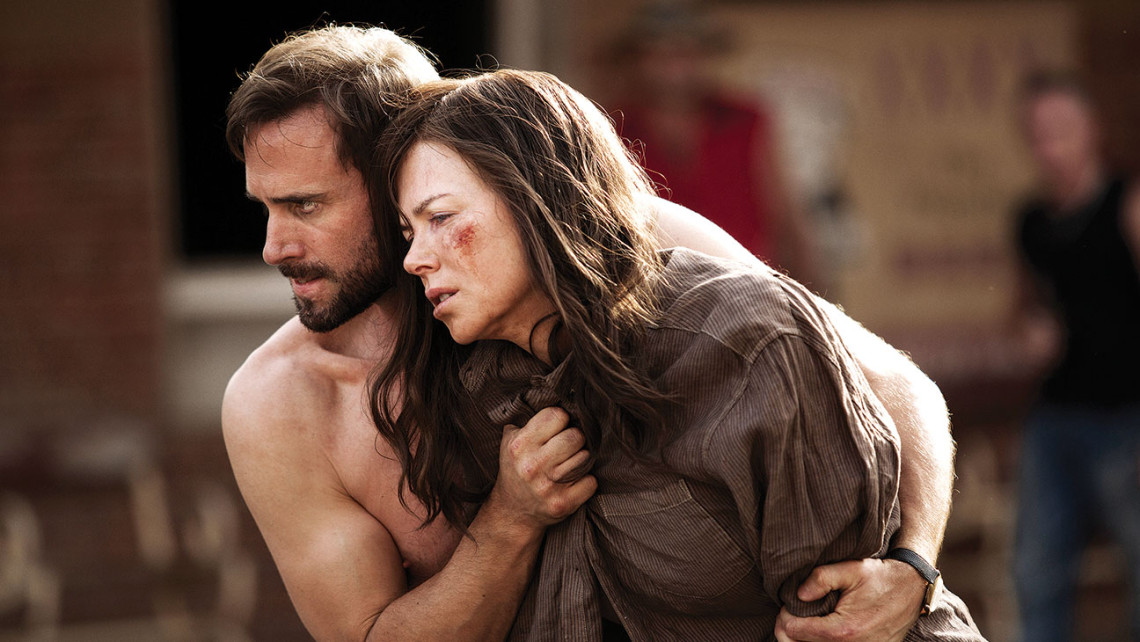 There’s a lot of intrigue and very little of interest in director Kim Farrant’s debut feature. It’s a movie of elisions and withholding, parceling out information at a snail’s pace while simmering in an overheated, eroticized atmosphere that promises far more than it delivers. Dreary and determinedly unpleasant, Strangerland is one of those stories that gets smaller as it goes along, portentously building up to no-big-deal reveals before collapsing into an incomprehensible muddle. I’m still trying to guess what it was supposed to be about.

Nicole Kidman and Joseph Fiennes star as a formerly cosmopolitan Aussie couple who took their two teenage children and moved to a podunk town on the edge of the desert for reasons to be named later. He’s a stuffy pharmacist who sleeps in a separate bedroom and mysteriously spurns his wife’s sexual advances. She frets around the house seemingly on the verge of a nervous breakdown even before the traumatic plot kicks in. Their young son (Nicholas Hamilton) is a dreamy-eyed non-presence prone to sleepwalking while his 15-year old sister (Maddison Brown) is a comically oversexed nymphet, leeringly photographed like a sweaty overripe peach, gallivanting around in her underwear and flirting with the mentally-handicapped hired housepainter (Meyne Wyatt).

Faster than you can say Picnic at Hanging Rock, these two kids wander off and disappear one night – vanishing into the Outback. A gigantic, catastrophic dust storm accompanies their parents’ discovery that the children have gone missing, for maximum symbolic nonsense. (Everyone in the background spends the rest of the movie cleaning up after the storm, get it?)

A depressed, straight-talking cop (Hugo Weaving) starts poking around and finds out that the family relocated after their daughter had an affair with her schoolteacher, which abruptly ended when Daddy Dearest beat the mortal shit out of the guy. He also discovers that our little darling was ducking school to shag local losers in a storage unit at the neighborhood skate park, and was even making time with that handicapped handyman. (Bit of a conflict-of-interest there, as Weaving‘s currently schtupping this particular suspect’s sister and thus starts shredding evidence as fast as he can.)

I realize I’m in danger of making Strangerland sound more interesting than it actually is, but all these revelations dribble forth with all the urgency of a funeral procession. It’s a glum and ugly movie, even before Kidman starts dressing in her missing daughter’s clothes while attempting to seduce any man in her general vicinity. After discovering the backstory, there’s nowhere left for it to go. By the end of the first hour, all the beans have been spilled so we just stew in them for another 60 minutes.

Joseph Fiennes – continuing an almost two-decade streak of demonstrable proof that acting talent doesn’t always run in the family – pulls an especially unconvincing hard-ass routine and spends most of the picture being enraged by any sign of female sexuality. Weaving’s cop tosses out the icky theory that maybe the daughter was such a tramp because Daddy was molesting her, but Strangerland is too busy disintegrating into pseudo-cosmic symbology to ever properly address any of the sad dumb policeman’s hunches.

Farrant seems to be striving for the haunting, elusive quality of 1970’s Aussie New Wave films by Peter Weir, or maybe Nic Roeg’s Walkabout. But the screenplay (by Michael Kinrons and Fiona Seres) is too thematically garbled and grounded in banalities to support such ethereal aspirations. Everything is pretty much abandoned at the halfway point, finally grinding to a halt with an abrupt pseudo-mystical shrug. Bad art movies can be such a chore sometimes.