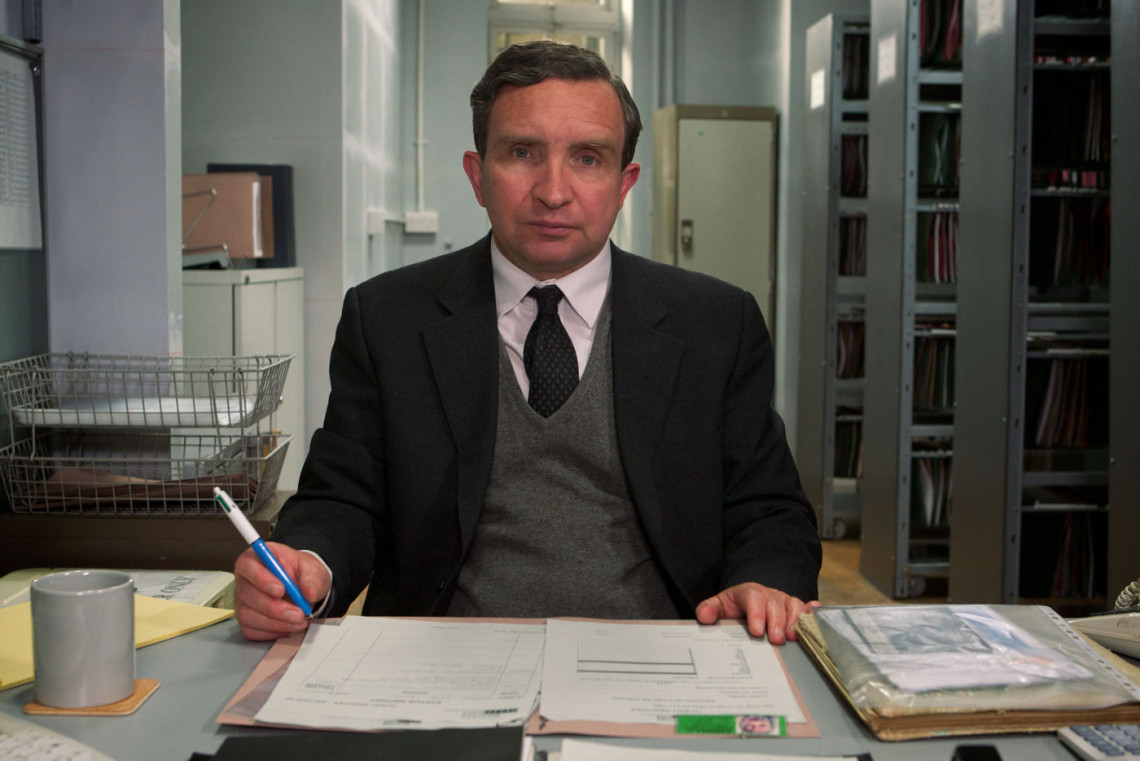 The title of writer, director, and producer Uberto Pasolini’s new film Still Life is the key to its storytelling. Taking it literally, Pasolini’s direction echoes the title of the film. He allows this story to unfold in quiet compositions of a small, mannered man dwelling within a small, mannered vision of London. Eddie Marsan is John May, a case worker for society’s forgotten and recently deceased. His job is to find the family, inform them of their loss, and coax them to pay the dead their last respects. He’s a lonely man who resembles the people he ushers into the afterlife. Seemingly known by no one, May spends his days alone in a small office, crafting narratives for the deceased. With no one to validate these lives, May crafts nearly wholly lived existences for these individuals to be read at their funerals. He is the stoic watcher, from funeral to funeral bestowing a sense of grace and dignity upon the dead.

When the bureaucracy considers May and his job obsolete, he must make the best of his last case. Seemingly formed by the disappointments of cases past, he focuses his energy and time into this final task. As he seeks out this dead man’s friends and family members, May begins to discover a love of life. He finally sees the world around him and not simply the death and lost memories of the deceased.

Pasolini frames May’s life in almost completely still photography. In most of the compositions, only May moves, dealing with office tasks or walking home, in and out of the frame. Each shot crafts an image of his life, one almost as inert as the dead he ushers into the void. Thus, the cinematography gives the sense of a life verging on boring. Marsan is almost a non-entity here, which is where the film slips. The script paints too broad a portrait of May, reducing him to an observer. Had the film maintained a similar pace, it wouldn’t be so bad. But eventually, May is changed by the grace and life of those whose dead he seeks to see off. In his change, he is made full; if he would’ve stayed an observer, Marsan’s stark face would’ve been a fine portrait of grief, loneliness, and loss.

Pasolini gets a bit overwrought with the premise, too; there are points where the contemplative is subsumed by reaching emotion, made more obvious by an overly melodramatic score, which almost underlines everything we’re meant to feel with each passing moment. For instance, May finds a potential suitor in the daughter of the dead man whom he is assigned to, causing his inner life to be upended by indie-romance cliches within the final act. This shift in tone and focus nearly dismantles the film’s contemplative and emotionally paced first two-thirds.

At the end, Still Life ponders who our neighbors truly are. We watch John May work and attempt to live the right human life – full of empathy and compassion. Most of the emotional beats Marsan and the script channel aren’t pandering but genuinely dwell on the worth of a human life (even when the human is thought of as worthless) and how we should envision death as universal.

The film’s most powerful scenes, which occur before the cliches set in, occur as we watch May presiding over funerals for three different people. He resides in those lonely spaces of death, not scared but loving as he watches the dead be blessed, prayed and sung over. These acts are his calling. He lives the truly still life, pondering each and every individual’s meaning and impact within the cosmos. He wants to send these forgotten into the afterlife with some sort of dignity.

Though the film ends on a very misguided, on-the-nose point, it’s Marsan’s gaze that should inform us on how to truly conceive of the forgotten or disowned. John May’s sight becomes our own, like observing lives as a still-life painting, examing each angle of impact and meaning. Despite its missteps, this film asks us to contemplate the worth of others. Still Life should cause us to look at each human being we come in contact with as a dignified person, deserving of attention and love, whose narratives should never be falsely crafted but genuinely remembered by those who knew them.