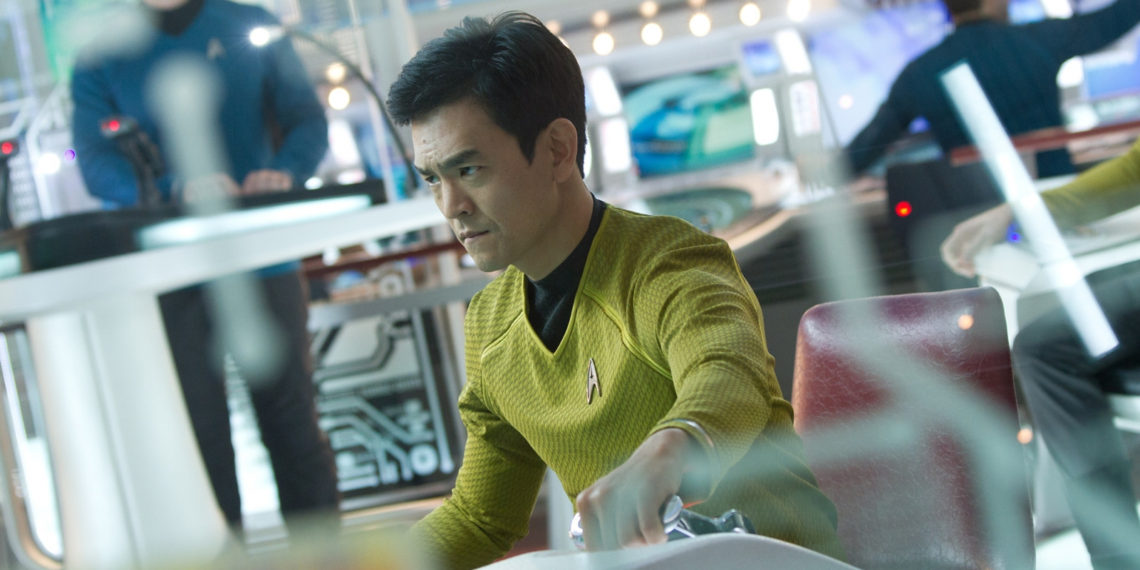 LGBTrek: A Brief History of Queerness on “Star Trek”

On the eve of the release of "Star Trek: Beyond", Mallory Andrews explores the history of the franchise's relationship to LGBT themes.

During a recent interview promoting the upcoming release of Star Trek Beyond (2016), actor John Cho let slip it would be revealed that his character, Hikaru Sulu, is gay. Reactions ran the gamut. Some, including the openly gay George Takei (Sulu’s original actor in the 1960s series), thought it was an affront to the memory of a classic TV character. Other hailed the decision as an overdue representation of queer characters in a beloved franchise. But this is not the first time queerness has been explored in Star Trek. Science fiction in the popular imagination has become synonymous with its admittedly often goofy-looking iconography: laser beams, rubbery-looking aliens, faster-than-light starships, and other space paraphernalia. But these visual cues are only superficial markers of the key philosophical concerns of science fiction: using the fantastical as allegory to comment on present-day issues through a utopic vision of the future. It’s this philosophical bent that is often used to separate space fantasy (like Star Wars) from the arguably purer science fiction of Star Trek. In this spirit, Star Trek has tackled queerness a few times throughout its multi-series run, both as alien allegories and through high-concept technological contrivances.

Some of these queer inferences are not major plot plots, but background information used as a way to shade in the diversity of the series’ galactic setting. Aliens who practice polyamory, polygamy, and communal partnerships have been referenced in passing several times. A fourth-season episode of Star Trek: The Next Generation (1987-1994) mentioned that the green antennae’d Andorians marry in groups of four (“Data’s Day”). Blue-skinned Bolians on Star Trek: Deep Space Nine (1993-1999) have multiple partners, whose interrelationships are referred to as “co-wives” and “co-husbands” (“Field of Fire”). And Dr. Phlox (John Billingsley), a main character on Star Trek: Enterprise (2001-2005), is a member of the Denobulan species, a race of polygamous aliens that traditionally have three spouses each, as well as any number of intimate relationships outside these marriages (“A Night in Sickbay,” “Stigma”).

One common manifestation of queerness on Star Trek is body swapping between genders, usually via some complicated technological means. One of the few instances of explicitly queer content on the original series (1966-1969) occurred in the final episode of the show (“Turnabout Intruder”). Captain Kirk (William Shatner) is tricked into switching bodies with one-time girlfriend Dr. Janice Lester (Sandra Smith) using a strange alien device. The switch is revealed to be a plot by Lester to take command of the starship, a goal she believes she was never able to achieve due to her being female. While the episode never depicts its body-swapped characters exploring queer desire, Lester’s extreme dissatisfaction with her biological womanhood speaks to an anxiety with her gender identity. 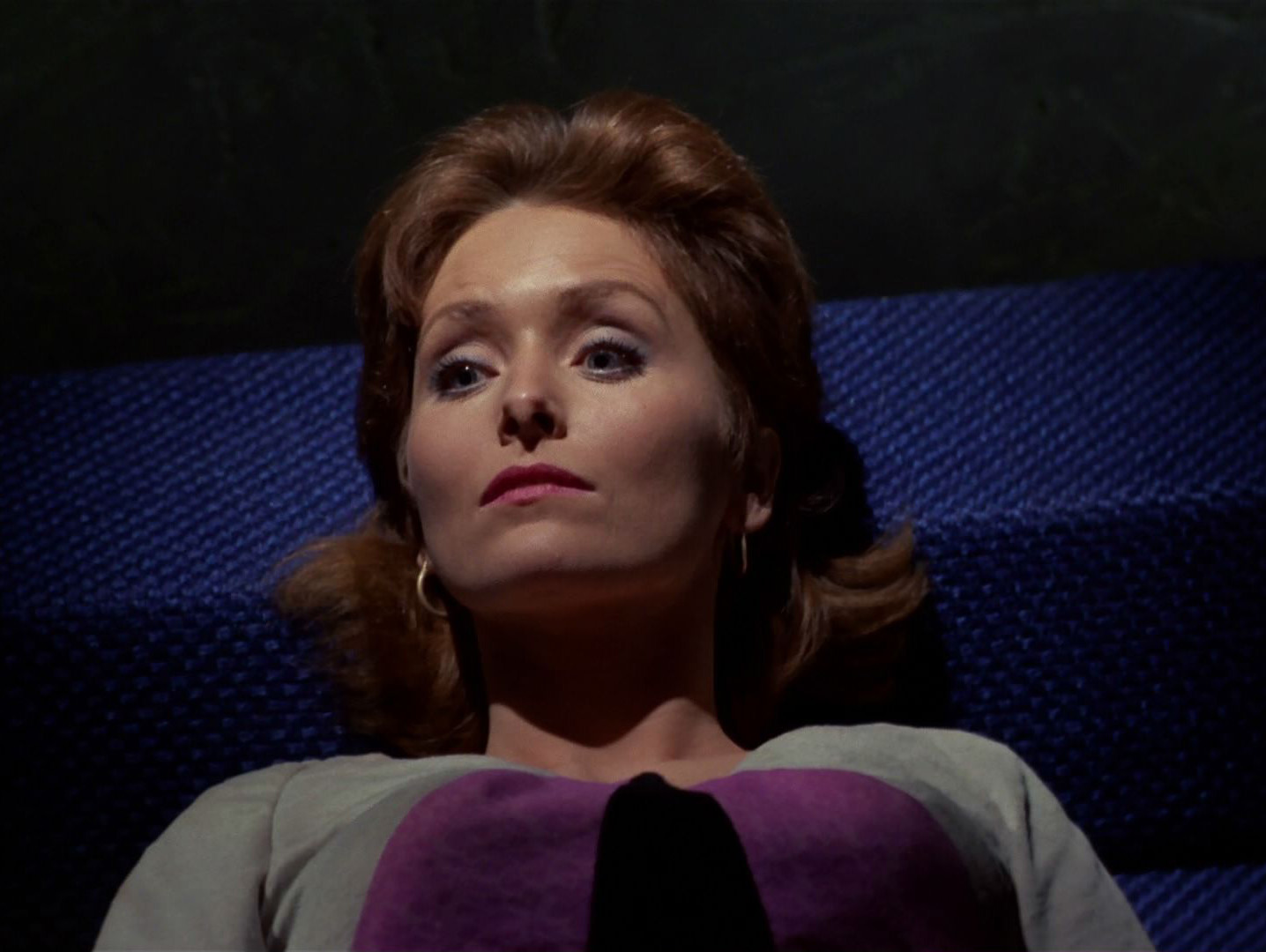 Two other notable gendered body-swap incidents in the franchise do explore the potential for queer sexuality. The first is the introduction of the Trill species on Star Trek: The Next Generation, an alien race comprised of slug-like symbiont living inside (and sharing a consciousness with) a humanoid host body. As the genderless symbiont’s lifespan is far greater than that of its hosts, it is transferred from host-to-host (and from gender-to-gender) across its lifetime. One such member of this species, Odan (played as male by Franc Luz) meets and falls in love with series regular Dr. Beverly Crusher (Gates McFadden). When Odan’s host body is injured, the symbiont is transferred into a female host (Nicole Orth-Pallavicini). While the new female Odan’s attraction for Crusher remains unchanged, Crusher finds herself unable to reciprocate homosexual attraction in return. In another body swap on Star Trek: Voyager (1995-2001), the holographic Doctor (Robert Picardo) is forced to hide himself by downloading his program matrix into the cybernetic implants of his colleague Seven of Nine (Jeri Ryan). As a result, the Doctor finds he is able to take control of Seven’s body, and thus feels haptic pleasures for the first time. Sensual experiences, such as smell and taste (first time indulgences in rich food and drink), eventually give way to sexual experiences when the Doctor-as-Seven has to navigate both his attraction to a female humanoid alien as well as the advances of an ardent male (“Body and Soul”).

The queer potential of the Trill species is explored further on Star Trek: Deep Space Nine in the character of Jadzia Dax (Terry Farrell). Jadzia is a female Trill, and the eighth host to be joined with the genderless Dax symbiont. Carrying the memories and experiences of eight lifetimes, both male and female, Jadzia’s sexuality is depicted as more open-minded than that of her peers. Her taste in men encompasses both traditionally handsome humanoids, and those with more strangely alien features—a series-long flirtation with the unseen transparent-skulled Captain Boday being a running joke. Jadzia’s capacity for queer desire is explored in “Rejoined” when she is reunited with Lenara Kahn (Susanna Thompson), the wife of one of Dax’s former male hosts. The Trill are expressly forbidden from staying in contact with loved ones from previous lifetimes, a phenomenon known as “reassociation.” Despite the taboo (an allegory for homophobia), Jadzia and Lenara are overwhelmingly drawn to one another, eventually sharing a passionate embrace—the first same-sex kiss to ever be depicted on a Star Trek series.

Star Trek: Deep Space Nine also uses the plot device of an alternate universe, or Mirror Universe (first introduced in the original series), as a way to experiment with the sexual fluidity of its main cast. For example, the uptight, conservative, and heterosexual Major Kira (Nana Visitor) stands in contrast to her Mirror Universe foil Intendant Kira. Villainous and voraciously bisexual, the Intendant flirts with members of all genders—including her own identical counterpart. Though the Intendant falls into the problematic trope of the “predatory bisexual,” one of her lovers is the Mirror version of another of the series’ main characters Ezri (Nicole de Boer), here reimagined as a lesbian resistance hero. (“Crossover,” “Through the Looking Glass,” “Shattered Mirror,” “Resurrection,” “The Emperor’s New Cloak”). 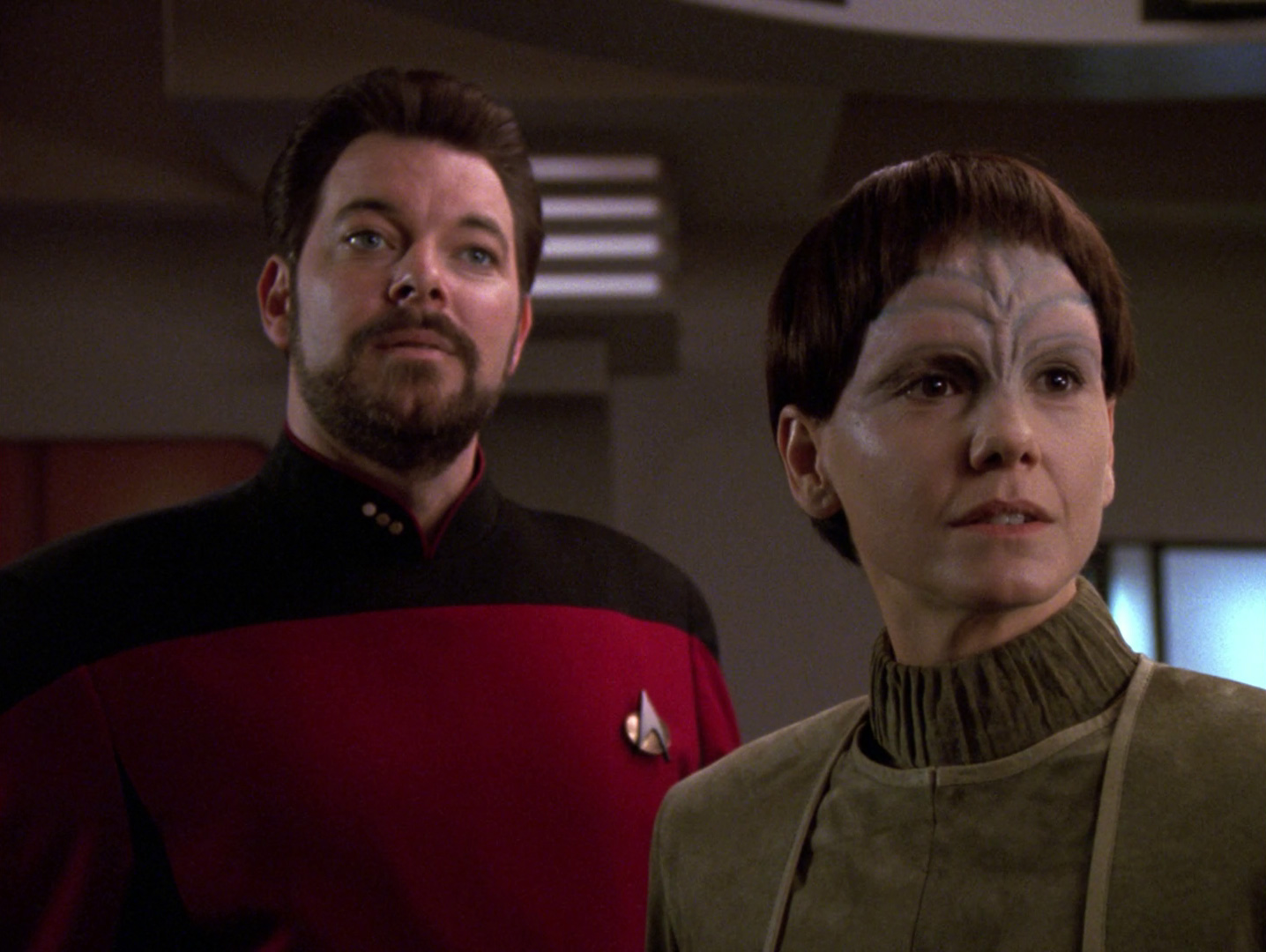 LGBT issues that go beyond queer desire and attraction have also been tackled on Star Trek. Homophobia of a sort arose on an episode of Star Trek: The Next Generation involving a genderless species known as the J’naii (“The Outcast”). On their planet, the concept of gender (that is, the binary of male/female) is considered highly offensive. If a J’naii comes out as identifying as one gender or another, it is considered criminal behavior; a perverted sickness requiring “psychotectic treatments” as a means of a cure. All members of the species were portrayed by androgynously costumed female actresses, somewhat tempering the queerness of the episode’s central love story between a female-identifying J’naii named Soren (Melinda Culea) and Commander William Riker (Johnathan Frakes). A similar allegory was presented on Star Trek: Enterprise when series regular T’Pol (Jolene Blalock) contracts Pa’nar Syndrome, a Vulcan neurological disease that can only be passed through a “mind-meld.” When the status of her symptoms are discovered by her home planet’s government, her career is put in jeopardy as her people consider “mind-melding” to be a highly offensive act perpetrated by a sick minority—an obvious metaphor for homosexuality and the AIDs epidemic (“Stigma”).

While Star Trek has a storied history of using science fiction tropes to examine queer narrative, it should not undercut the significance of Star Trek Beyond’s retconning of Sulu’s sexuality. What separates these prior instances from Sulu’s coming out is the absence of science fiction. It is the first time a main character has been depicted as homosexual as a matter of course, without hiding behind allegory, technobabble contrivance, or a similar plot device. In its matter-of-fact presentation of queerness, it boldly goes where no Trek has gone before.