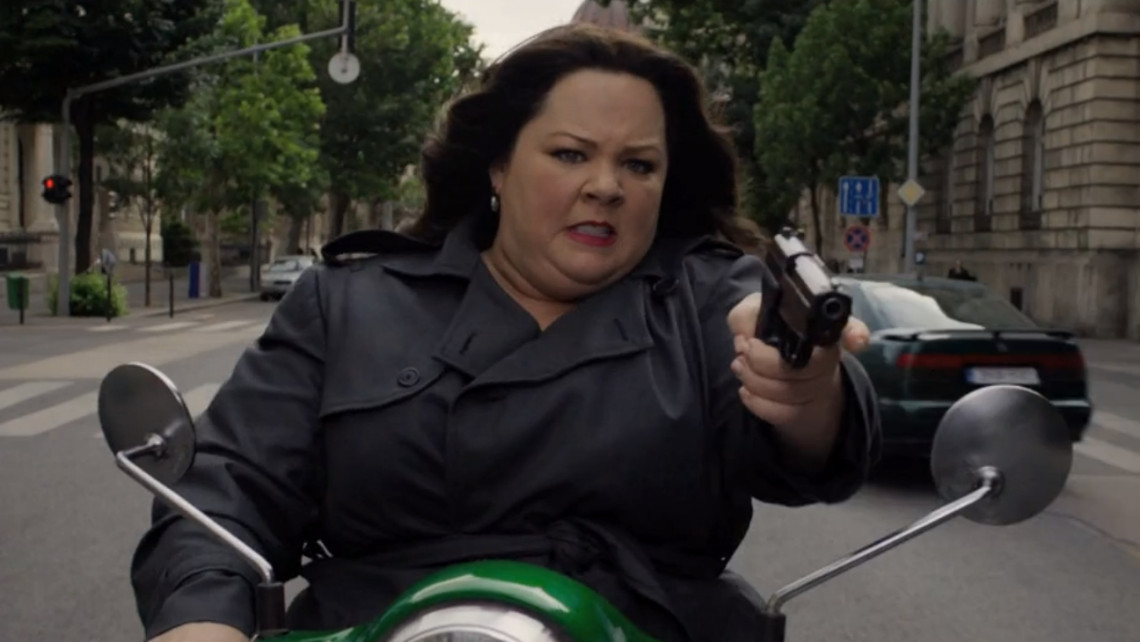 Note. This review originally ran as part of our coverage of South by Southwest 2015.

Despite having almost literally the most generic title it could possibly have, Spy is a dizzyingly funny espionage comedy, with a non-farcical, non-spoof plot that works on a straightforward level, too. With several very funny performances and some memorable dialogue, it’s almost beside the point that, oh yeah, it happens to star a woman.

That woman is Melissa McCarthy, an unstoppable force of nature who, unlike most forces of nature, has great comic timing. Brassy, physical, and always committed to the joke, McCarthy has been misused in a few things (like Identity Thief and that “Fat People in Love” TV show she’s on), but it’s impressive how quickly Hollywood has figured out how to use her talents, and how quickly she’s gained enough clout not to have to settle for fatty-fall-down comedies.

Spy reunites her with Bridesmaids and The Heat director Paul Feig, who wrote the screenplay this time, presumably with McCarthy in mind. She plays Susan Cooper, a C.I.A. analyst whose job is to stay at headquarters and feed spies information through their earpieces while they’re on missions. She’s paired with Bradley Fine (Jude Law), a suave agent on whom she has developed a crush, but to whose 007 she will always be nothing more than a Moneypenny.

When an arms dealer named Rayna Boyanov (Rose Byrne) kills Fine and exposes several other agents, it becomes necessary for the C.I.A. director (Allison Janney) to send a complete nobody into the field, just to keep tabs on Rayna before she can sell a nuke. That person will be Susan.

Now, here you are expecting that Susan will be totally incompetent, a klutz who will only save the day accidentally, and probably with pie on her face. Here you are wrong. Susan had all the C.I.A. training when she joined up, and she’s technically an agent, albeit an out-of-practice one with no field experience. She’s rusty and unsure — she’s not James Bond — but she’s not an idiot. The voice in her ear back at HQ is her best friend and co-worker Nancy (Miranda Hart), whose delightful enthusiasm buoys her through the mishaps.

A lot of jokes come from the Agency’s shoddy, almost hostile treatment of her, as she gets the unglamorous versions of the resources that more important agents get, not to mention less flattering cover identities. When she follows Rayna to Rome, her local ally is a dashingly pervy Italian buffoon played by a very funny Peter Serafinowicz. She also must contend with fellow agent Rick Ford (Jason Statham), a dim English hothead who went rogue in protest over Susan’s assignment and is trying to accomplish the mission himself. Statham’s performance is impressively daft, never more so than when he rattles off lists of past exploits that sound like funnier versions of those Chuck Norris jokes people used to tell.

While keeping an eye on Rayna, Susan spots an attempt on her life and must intervene, lest Rayna perish before she can lead them to the nukes. Now Susan is deep undercover, befriending Rayna the high-society arms dealer as the dumpy American who saved her life. Rose Byrne is fiercely funny as the haughty, cruel Rayna, continuing a streak of sharp comedy performances from her. She and McCarthy are great foils for each other, and the script mixes odd-couple humor with weirder things like Susan getting glamorous makeovers (McCarthy looks great) that Rayna finds hideous.

This movie has no fat jokes. Not one. We’ve been conditioned to expect that when a Person of Size stars in a comedy, there will be jokes about his or her weight. And Spy has so much funny stuff going on that it doesn’t have to bother with it. At one point, Susan even asks Ford what’s so hard to believe about a man being seduced by her — a perfect setup, especially for the mean Ford– and instead of a fat joke, the movie goes with a joke about Susan’s frumpy style and personality. The humor is based on character, which Feig and McCarthy created, not on McCarthy’s physical attributes, which came with the package. In other words, they tried harder, and it worked.

It’s also notable how many roles in the movie are female, including some (like the hero’s boss and the lead villain) that would usually be male, without the story ever being overtly female-oriented. Apart from a quick exchange between Susan and her C.I.A. boss acknowledging how female agents have been overshadowed in the past, none of Spy is “about” girl power or feminism or equality. It just IS those things. When Susan goes undercover and needs weapons disguised as things she might carry in her purse, she doesn’t get exploding tampons or poison lipstick or whatever. Because the quartermaster (Michael McDonald) is weirdly bitter toward her, she gets embarrassing stuff like hemorrhoid pads and toenail fungus cream — again, jokes based on character rather than on the simple fact that she’s a woman. Most of the things in the film that are funny, or even supposed to be, would work with the genders reversed, too.

The best part, of course, is that it’s funny — brash, potty-mouthed, and, as Susan becomes increasingly confident, cheerfully violent in a badass fashion. Not every joke lands, of course; I don’t want to oversell it. But the success rate is high enough that when the film ended with the door open for more adventures with these characters, it sounded like an idea with promise.