Songs in the Key of Cinema: “Boom Boom” and Bond’s Masculinity in “Skyfall”

With that butter slathered hair, the cream colored jacket and ambrosial dress shirt, and flamboyant nature in general, Javier Bardem’s Silva seems, at first, entirely antithetical to Daniel Craig’s James Bond. But their similarities is what makes the relationship dynamic intriguing. Silva knows how Bond operates and knows exactly how to get under his skin: by challenging Bond’s ideal of masculinity. This sly, subversive action can be summed up easily by the use of one song: The Animals’ cover of “Boom Boom”. Late in the twenty-third James Bond film, Sam Mendes’s Skyfall, Silva brings a massive helicopter and blasts the song towards Bond’s home, taunting him, practically begging for Bond to walk out so Silva can continue to play mind games with him. And with the use of that song, one can delve into the twisted dynamic between James Bond and one of the most memorable villains in the franchise.

“Boom Boom” was originally written by John Lee Hooker in 1961, infused with the blues style Hooker was associated with. While it was certainly popular upon its release in 1962, charting in the United States (as both an R&B song and as a pop song) and in the UK, it wouldn’t become a hit until the English band The Animals covered it in 1965. Between the two covers, they’re technically very similar, but the Animals’ cover employs the use of an organ. The difference in tone is merely in the vocals, the Animals front man Eric Burton adding a louder, maybe shouty quality to the song (perhaps reminiscent of John Lennon’s throat shredding vocals on “Twist and Shout” in 1963). While Hooker’s version is probably sexier in comparison to the cover, the cover more effectively captures the catcalling nature of the song, with regard to the context of Skyfall.

Technically, we’re looking at two scenes. Chronologically, the helicopter scene actually comes later, when the song is actually used. As aforementioned, a massive helicopter has “Boom Boom” bleeding from loud speakers, calling out Bond like a bully in a school yard. “Always got to make an entrance,” Mr. Bond sighs, before asking his compatriots to ready themselves for the impending attack. The song, though cleverly used here, has more relevance earlier in the film when we first encounter Silva. Bond, tied to a chair on an abandoned island sits as Silva, a bit of a dandy, strolls down towards the camera recounting a tale of rats. Silva gets up close and personal with Bond, emotionally and physically, and for the first time in the series, Bond’s masculinity is challenged in a major way.

Bond has been, for more than five decades, an icon in heterosexual masculinity. He is, for lack of a better phrase, the Platonic ideal of a Straight Man. Arguably, his masculine traits are better known than his gadgets or his missions. The way he seduces women, the way he drinks without a care, and the way he uses his arsenal seem to be what make James Bond Double-O Seven. His entire persona, originally crafted by Ian Fleming, is built around an archetype that was a product of World War II and the early Cold War, which seems somewhat dated now. It is curious, then, that such a persona, one whose very existence is kind of dependent on a certain amount of lascivious misogyny, should continue to exist in a form that has barely mutated or transformed, especially as the Bond films have occasionally tried to address other historically important events in the films. The Bond franchise has occasionally tried to employ “powerful female characters” in the films, but their power is more of a token than a sign of depth and agency. In the end, they all end up in bed with Bond. (Some of these issues are kind of addressed in the documentary Bond Girls Are Forever, where, truth be told, Jill St. John is heard saying “It’s a fantasy!” in a very “get over it” tone of voice.)

Intentionally or not, though, the masculine persona that Bond is so well known for is one of the primary pieces challenged in the film. Daniel Craig’s introduction as the character in Martin Campbell’s Casino Royale undoubtedly welcomed the use of the words “world weary” back in 2006, but Skyfall is far more overt in addressing how jaded and realistic the character has to be in a vastly different world than the one Sean Connery lived in back in the first Bond films. Bond’s alcoholism has taken a toll on his liver, his health is not at all what it has been in the past, and one could argue that the “sabbatical” he takes after he’s shot in the pre-titles sequence involves Bond suffering from clinical depression. The one thing he has going for him, besides his chutzpah, is his insatiable sexual appetite. 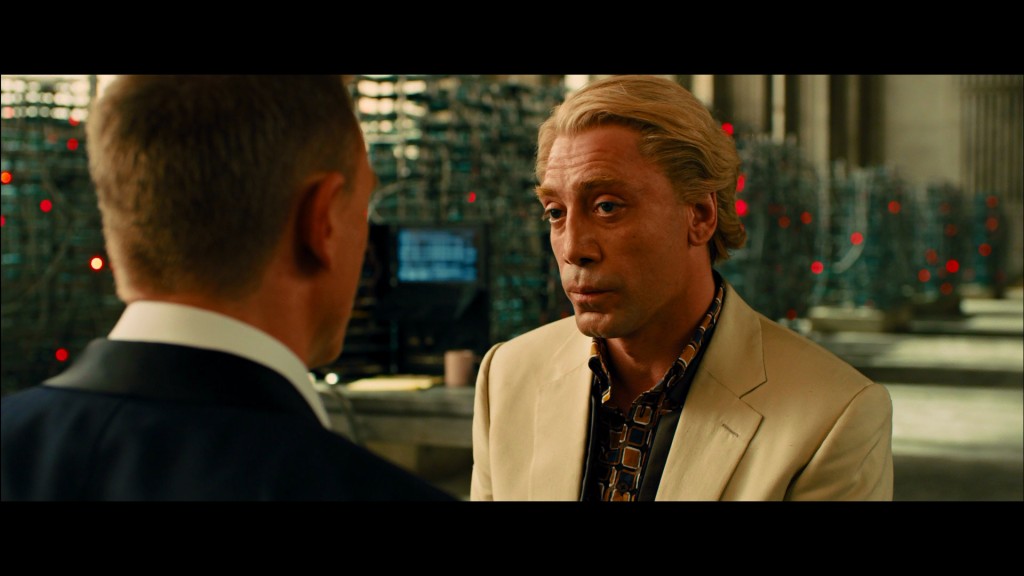 So, if we are going to read Skyfall as a realistic acknowledgement of the cartoonishness of Bond’s past and, in a way, a fight for Bond to regain his masculinity, one must consider the other challenge to his masculine ideal. That comes in the form of Javier Bardem’s stylish and sadistic Silva.

Although Daniel Craig denies that Silva is gay, he does say, “I think he’d f*** anything.” It’s undeniable the flamboyancy with which Bardem brings to the role. And while this showy style feels a little foreign (at least in how in your face it is) the fact of the matter is it is technically no showier than Bond has ever been. Bardem channels the same kind of flamboyancy that Bond has and that, I would argue, has always possessed. Only Bond has always manifested it using hyper-masculine techniques and actions and Silva is, comparatively, hyper-feminine. Regardless of whether Silva is gay or not, it’s important, then, to read Craig’s quote as labeling Silva as at least queer. And this only really matters because this queerness is used to intimidate.

Silva is seen as just as sensual as Bond has ever been with a woman, but it feels foreign and taboo because Bond is in a position that we have never seen him in. Well, sort of. You could argue that the Craig era of Bond films is the most homoerotic the series has ever been. The ball whipping scene in Casino Royale stations a naked 007 in a chair being tortured in a fairly S&M way. (Lest we forget the connotations of “balls”.) And then you have this: Bond’s shirt being unbuttoned lovingly and his collar bone being stroked. Silva slides his hands up Bond’s thighs and Bond barely lurches. And it would be foolish to disregard Bond’s line conceding with a wink, “What makes you think it’s my first time?” 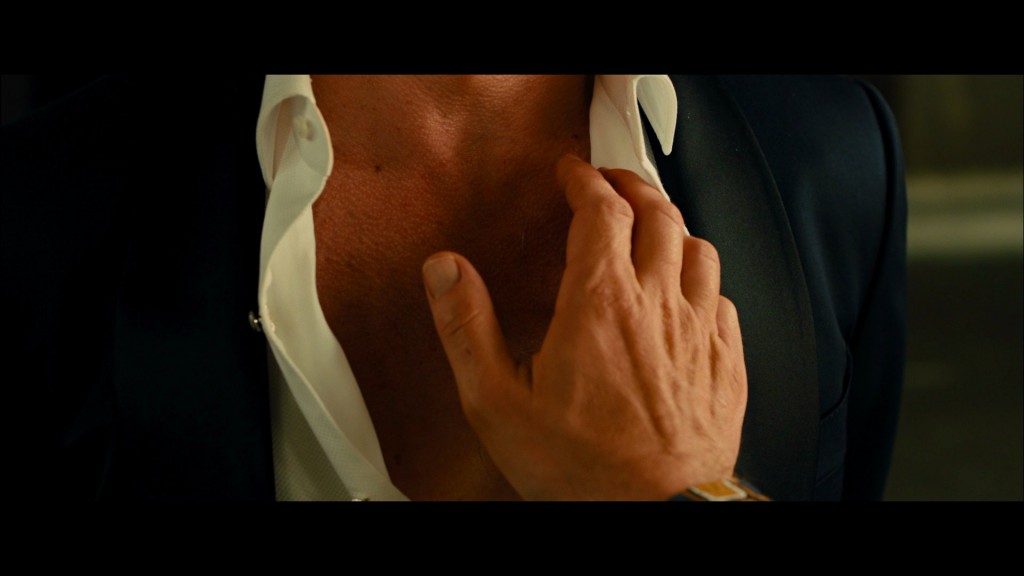 That Bond’s masculinity is being challenged in this scene means more to the audience and how we’ve perceived Bond than to Bond himself. I would argue this insofar that it feels like that the writers are trying to better establish some sort of canon or mythology, a foundation that suits continuity better than the previous 20 or so films (can we pretend Quantum of Solace never happened please?).

Ah, yes, the song. Well, take a look at some of the lyrics:

Gonna shoot you right down

Take you in my arms

I’m in love with you

Love that is true 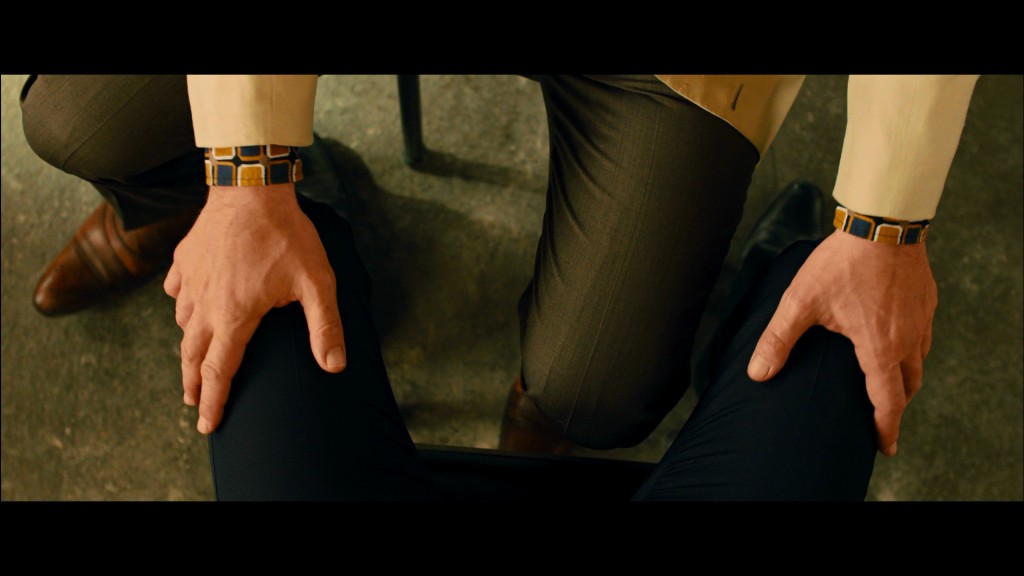 Silva can pull out the same arsenal that Bond has been using for decades, only this time to taunt him. His love for Bond comes out of jealousy and rivalry. The irony is that the love is as sincere as Bond’s love for any of the women he has bedded.

When you walk that walk

And you talk that talk

You knock me out

Right off of my feet

And here, Silva calls out exactly what makes James Bond that figure of iconography: the way he walks with confidence across the screen and how he shoots down the gun barrel at the beginning of (almost) every single film; and the way he talks, slyly seducing every woman in his path, coolly uttering his name without a sweat. Silva is taking low blows and getting personal.

“Boom Boom” is originally just a brazen, ebullient song of lust and sexual attraction. But when used in the Bond film Skyfall, it’s utilized to question a paradigm in a film franchise that’s existed for decades. The song, like the characters have verve, and its use pulls off a slight subversion of a character we thought we knew. It becomes an almost self-reflexive examination of how we’ve come to know James Bond’s masculine identity, and how, with two scenes, that identity is upset. That doesn’t inherently change James Bond as a whole. Still, after all these years, nobody does it better.

2 thoughts on “Songs in the Key of Cinema: “Boom Boom” and Bond’s Masculinity in “Skyfall””