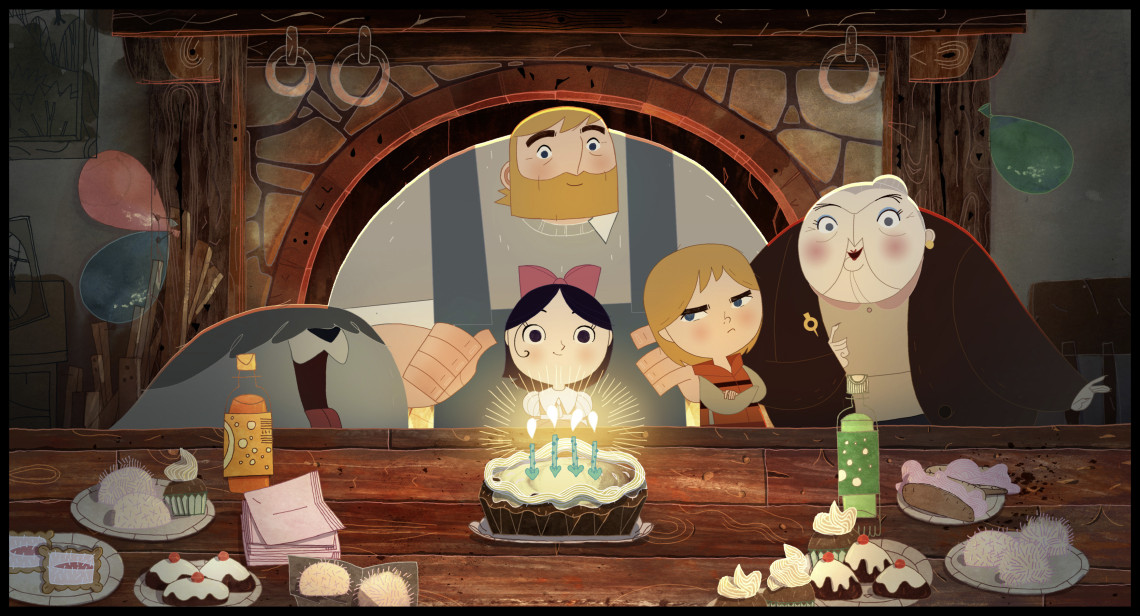 “Song of the Sea”

There was once a time, not so long ago, when hand-drawn animation wasn’t so hard to find in feature films. Even during the early years of the 2000s, Walt Disney Animation Studios and competitors like DreamWorks Animation and Paramount were making traditionally animated feature films, including Lilo and Stitch. But eventually, studios presumed (incorrectly) that the reason why films such as Spirit: Stallion of the Cimarron (Remember? Matt Damon as a horse? It happened.) and Home on the Range (Dame Judi Dench! Roseanne! Randy Quaid! Really!) tanked at the box office was their format, not their content. And so, with the exception of Laika Animation Studios, the animation we see in mainstream cinema now is entirely computer-animated, even when the stories being told owe a clear debt to the past. (This applies as equally to Frozen as it does to something like Despicable Me, which feels like a descendant of something like Gerald McBoing-Boing.)

So thank God for films like Song of the Sea, which are too rare these days and become all the more beautiful because of it. Its style and storytelling fall in line with the great films of Studio Ghibli, as focused on creating beautiful and colorful imagery as on building characters as vibrant and singular as the worlds they occupy. The film, from director Tomm Moore of the surprise Oscar nominee The Secret of Kells, focuses on Ben and his seemingly mute 6-year old sister Saoirse, who live with their emotionally distant father Conor (voiced by a fittingly gruff and terse Brendan Gleeson). Ben’s mother died under mysterious circumstances when he was younger, and after Saoirse finds a shell flute belonging to her, Conor is swayed to force them to move to the city with their grandmother (Fionnula Flanagan) without a word of explanation. Ben’s curiosity and stubbornness–it’s an understatement to suggest he’s not the most loving big brother at the outset–get the better of him, and so he journeys back home, in the process realizing that Saoirse, like their mother, has an extremely powerful and supernatural connection to Irish folklore and mythology that may explain Conor’s choice to get them as far from the sea as possible.

It’s that mythological spirit that fuels the story as well as the animation. Song of the Sea, next to The Tale of the Princess Kaguya, another film released in the United States this year by the indie animation company GKIDS (which is, in bringing these pieces of art to a domestic audience, truly doing the Lord’s work), is one of the most visually exciting and gorgeous films of the year. Moore and his animators repurpose the fables of their homeland in such a way that recalls a most colorful pop-up book, a vivid invitation to a strange world of region-specific creatures and incantations. Even in the moments where the pacing goes a bit slack (or when Ben’s mostly righteous frustration at being kept in the dark by his father, as well as his scorn towards his sister, who he sees as the source of all the problems in his family’s life, tips towards being annoying), there’s not a single frame or moment here that doesn’t ooze with dazzling imagery. Ben and Saoirse’s various encounters on their long trek from the drab city to the verdant and lush country offer an equally diverse array of character and production design, too.

In its depiction of unspoken familial strife–with Saoirse not speaking at all and Conor barely able to communicate, only Ben can voice his frustration, and does so often–Song of the Sea manages to almost always strike a balance between a child-friendly visual aesthetic and a more mature commentary on grief and coping with loss. Ben’s lashing out and rebelling as much because he’s at the ripe stage of adolescence where he presumes he deserves to be treated as an adult even though he’s still far too young to grasp his father’s pain and suffering; kudos to the filmmakers for allowing such a prickly character to be the lead of the picture.

It’s interesting to, if only on the surface, contrast Song of the Sea with the aforementioned The Tale of the Princess Kaguya, due to their respective connections with regional folklore. Kaguya is an adaptation of a centuries-old folktale, presenting a young woman who desperately wants to be free and is constricted by her adoptive parents, her actual royal lineage, and their respective societal norms. She, like Saoirse, is a being borne of some kind of magic; she, like Saoirse, didn’t ask to be made that way, but cannot break free of those bonds. Song of the Sea takes a slightly more masculine approach, filtering the issue of feminine control through the point of view of male characters, even in apocryphal myths being imparted to Ben and his sister. Kaguya is a more ambitious film, perhaps, and more adult in its scope and character development. But Song of the Sea is no less lush and beautiful to look at, and is just as rock-solid an argument for the furtherance of hand-drawn animation in the 21st century. Films like Song of the Sea are bright, warm, exciting proof that the form can adapt and evolve just as well as computer and stop-motion animation. Hopefully, it gets the audience it deserves.