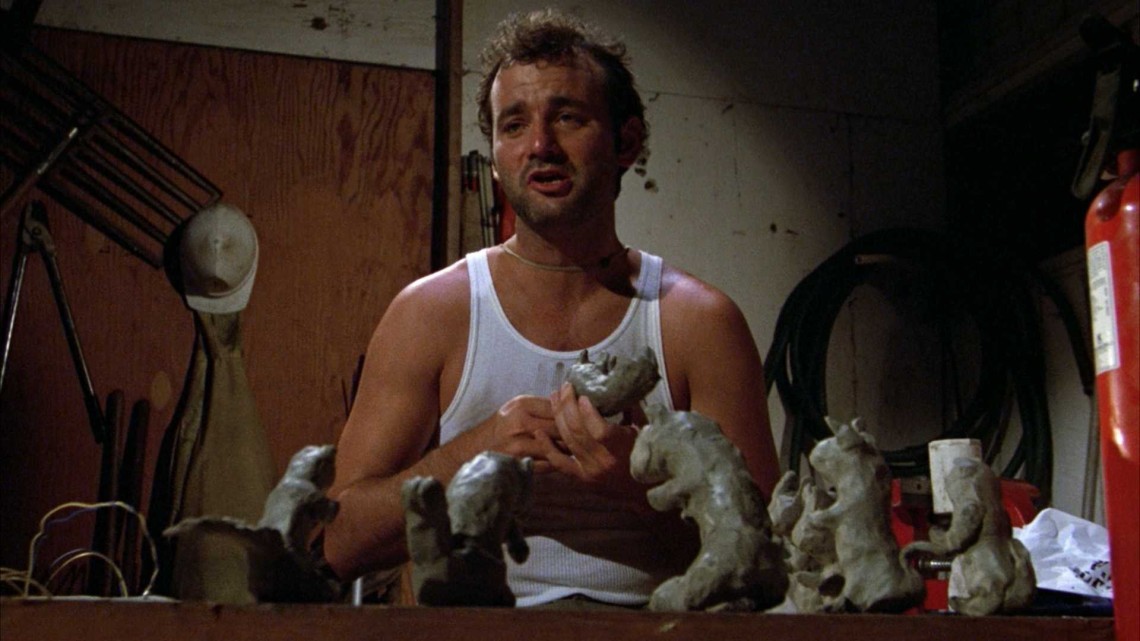 By 1979, Saturday Night Live was a house divided. Popular cast members John Belushi and Dan Aykroyd were preparing to send their Blues Brothers characters to the big screen, bolstered from the success of Belushi’s National Lampoon’s Animal House (1978). The show’s original breakout star, Chevy Chase, had already left for Hollywood, buoyed by stories proclaiming him as the new Cary Grant or successor to Carson’s Tonight Show. After the fifth season, the Not Ready for Primetime Players decided they, in fact, were. Saturday Night Live was left to be retooled in the hands of a new era of performers.

Even Bill Murray, who assumed Chase’s place on the show, enjoyed his first taste of movie glory when his starring debut, Meatballs (1979), grossed $43 million at the domestic box office. Adjusted for inflation, that’s $139 million by today’s standards, the fifth-highest-grossing debut film from an SNL performer (behind the likes of Animal House and 48 Hrs.). With 1980’s Caddyshack, Murray proved Meatballs was no fluke, with his Carl the assistant becoming one of the most memorable characters in film history. (His “Cinderella story” improv is #92 on the American Film Institute’s Top 100 Movies Quotes compilation.)

Now one of the most enduring comic figures of his generation, Murray is among equals in Caddyshack, a film co-written by his brother Brian Doyle-Murray, longtime collaborator (and director) Harold Ramis, and Doug Kenney. Watching Caddyshack is almost like a who’s who of comedy heavyweights – four performers (Murray, Chase, Rodney Dangerfield, Ted Knight) each with individual personas and approaches to comedy. 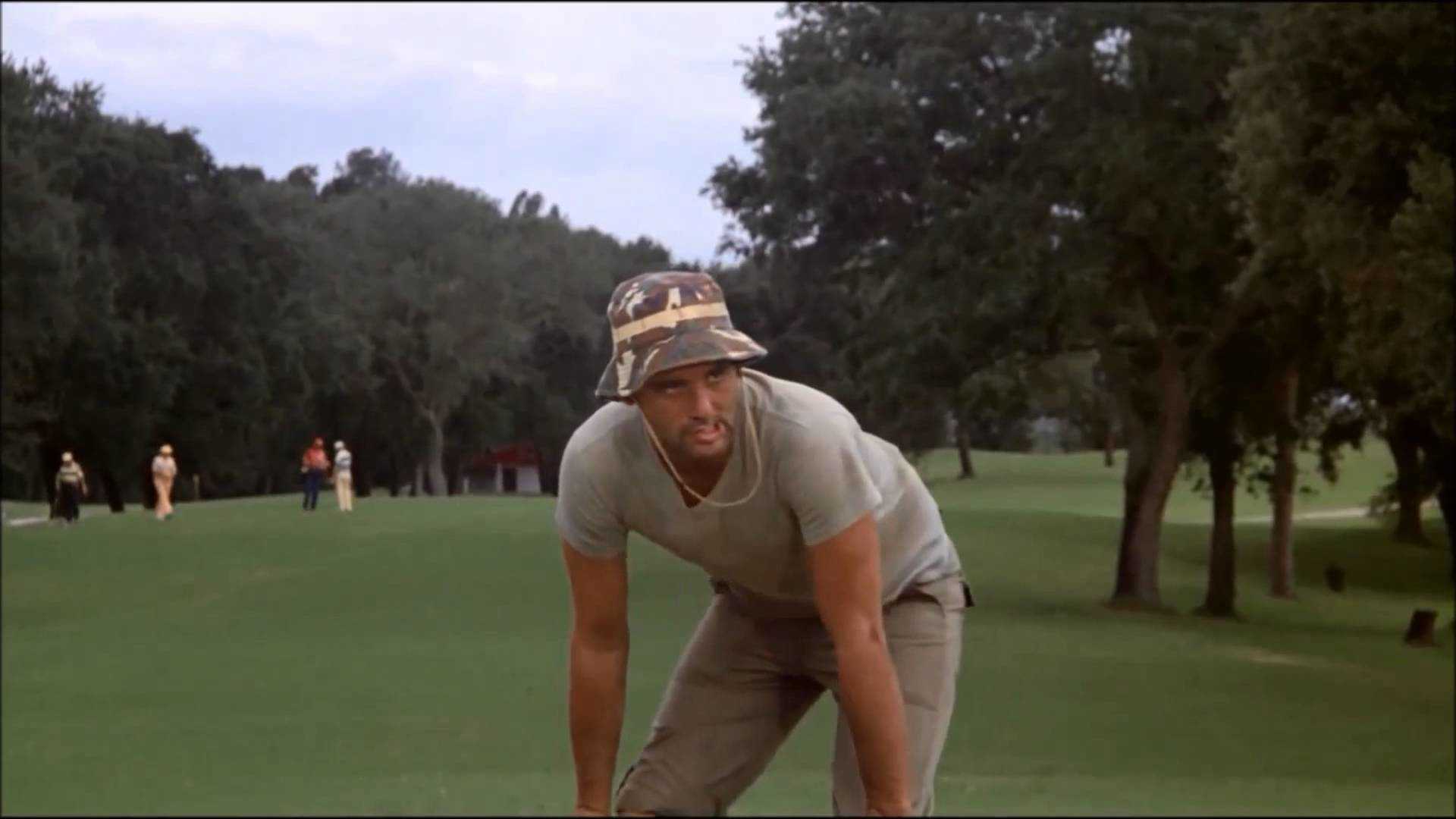 And yet, through his iconic performance, Murray stands out in one of the deepest benches ever assembled, eclipsing even his SNL predecessor Chase. It would not be the first or last time their paths crossed.

Professionally and personally, Murray and Chase make interesting case studies. In background, they were total opposites. Chase came from a wealthy New York family – his father a prominent publishing editor, his mother a socialite – with ancestors dating back to the American Revolution. By contrast, Murray grew up working class, the child of Irish Catholics. While Murray cut his teeth with Second City, he joined Chase (and Belushi, Ramis, and others) at the National Lampoon Radio Hour. Several years later, when Chase was a late-night sensation, Murray appeared on the rival ABC show Saturday Night Live with Howard Cosell, a failure referred by its own director as “one of the greatest disasters in the history of television.”

While Chase, Belushi, and company were the Not Ready for Primetime Players, Murray and the likes of his brother Brian and Christopher Guest were known as The Primetime Players on ABC. The quixotic Cosell variety show may have shared several similarities to its NBC competitor, including its eventual name, but it did not have the same popularity. It was quickly cancelled.

And then, Murray didn’t leapfrog immediately to stardom even after joining SNL in 1977, unlike Chase. In fact, his early work was inauspicious. Finally, after several months paying his dues as “the second cop, the second FBI agent, the guy holding the mop,” Murray appealed directly to viewers on air during his ‘new guy apology’ speech. By this point, Chase was hosting his own NBC special The Chevy Chase Show and making his debut as a lead in the popular Goldie Hawn comedy Foul Play, which earned him a Golden Globe nomination. To the cast of SNL, Chase – a “medium talent,” according to Murray – was undeserving of his celebrity.

Chase’s shadow loomed so large over his SNL replacement that Murray felt compelled to fight him during his return to the show: “I got into a fight with Chevy the night he came back to host. That was because I was the new guy, and it was sort of like it was my job to do that.”

At a certain point, however, Chase flatlined. He never lived up to claims he’d be the new Cary Grant or Carson (certainly not when he attempted his infamous late night talk show on Fox). Even by the late 70s, the shine was wearing off. Foul Play was a hit, but overshadowed by the classic Animal House, which Chase had passed on to make Foul Play. Shortly thereafter, he agreed to star in Oh! Heavenly Dog (1980), which paired him with Benji. By the time he was offered Caddyshack, a chance to reunite with the likes of Murray and Ramis, his post-SNL film career centered on headlining a kids’ flick with a dog. 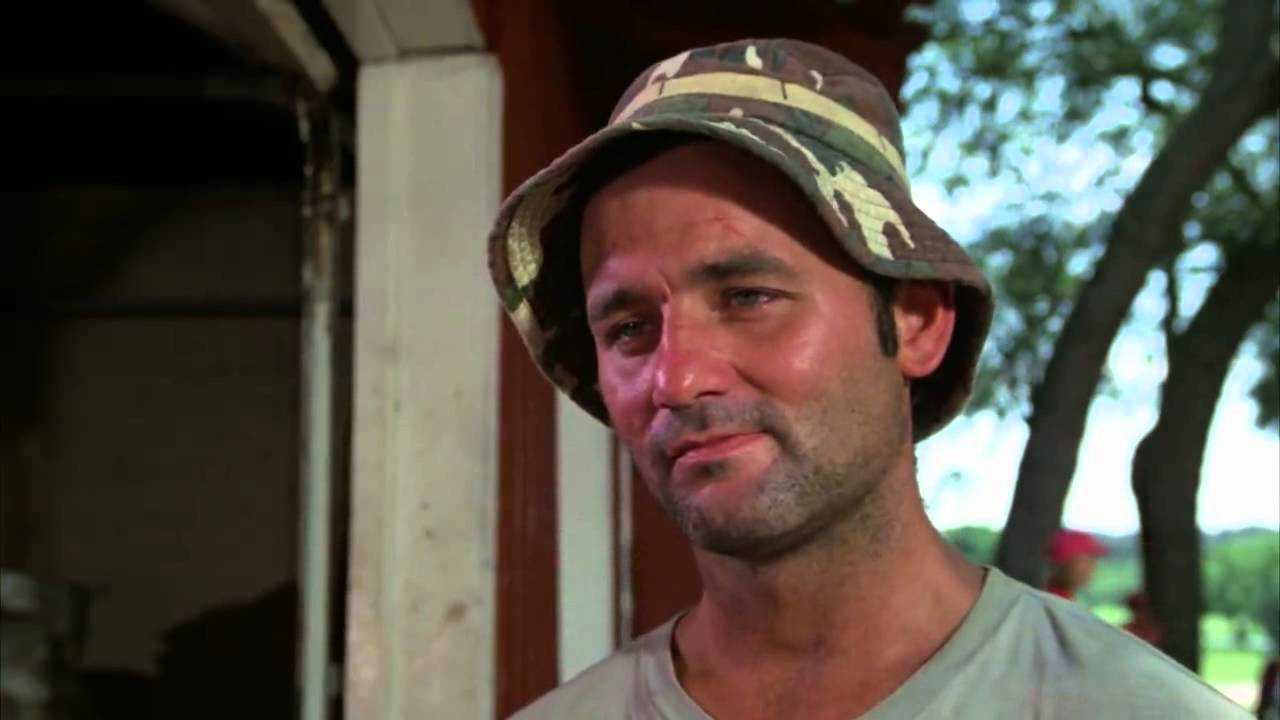 Based on Doyle-Murray’s childhood memories of caddying in Illinois, Caddyshack the story/filmed script differs wildly from what was eventually edited and released. After Animal House, co-writers Kenney and Ramis were in high demand for their next project. Various ideas were pitched, including a story on the American Nazi Party. Still, Chase and Murray’s attachment to Doyle-Murray’s story clinched studio backing.

According to A Futile and Stupid Gesture, on the great Doug Kenney, the now-defunct studio Orion considered Caddyshack as a B movie, capping their budget to $6 million. This came as a disguised blessing to the young, inexperienced filmmakers shooting outside Fort Lauderdale. With its disregard for story, and renegade approach to comedy, Caddyshack – like other slapdash efforts from this generation of burgeoning comic filmmakers – deserve kudos and historic reappraisal for their work. Many film historians and academics have studied the cinema of auteurs from this period – Lumet, Altman, Kubrick, Coppola, Scorsese, etc. – without acknowledging many of the same cultural and sociological factors impacting the era’s comedy films as well. (Peter Biskind’s Easy Riders, Raging Bull caps this period roughly with Heaven’s Gate, while ignoring that great comedy directors during this time, such as Ramis and John Landis, also started out making films in the 70s, while continuing to do good work well beyond some of their more dramatic, self-serious counterparts.)

As many have reported, Murray’s scenes were not written, giving him broad room to improvise. His character, Carl, was based on the bum Honker routine he perfected during his time at Second Time and National Lampoon. While described as difficult and moody onset – a reputation that has dogged him throughout his career – Murray’s brief time shooting Caddyshack confirmed both his comic genius and onscreen charisma. As co-star Michael O’Keefe put it: “He was a force of nature… he was a movie star when he came onto this planet.”

As the film’s biggest stars, Caddyshack’s writers quickly concluded Murray and Chase needed a scene together. Together with Kenney and Doyle-Murray at lunch, they conceived the idea behind Ty Webb visiting Carl at his home, a set Murray himself decorated. The scene, again, was nearly entirely improvised. It remains the only time Murray and Chase have appeared onscreen in a film together. (A different scene featuring the stars, cut from the film, can be viewed on YouTube.)

As a film, Caddyshack has a feeling all its own, from its Kenny Loggins soundtrack to its offbeat take on class warfare. After the film’s release, it was clear Murray was destined for bigger things. With Stripes (1981), he worked again with Ramis before appearing in a different sort of comedy in Tootsie (1982). In part due to Caddyshack’s success, he became one of the highest-grossing stars of the 80s. 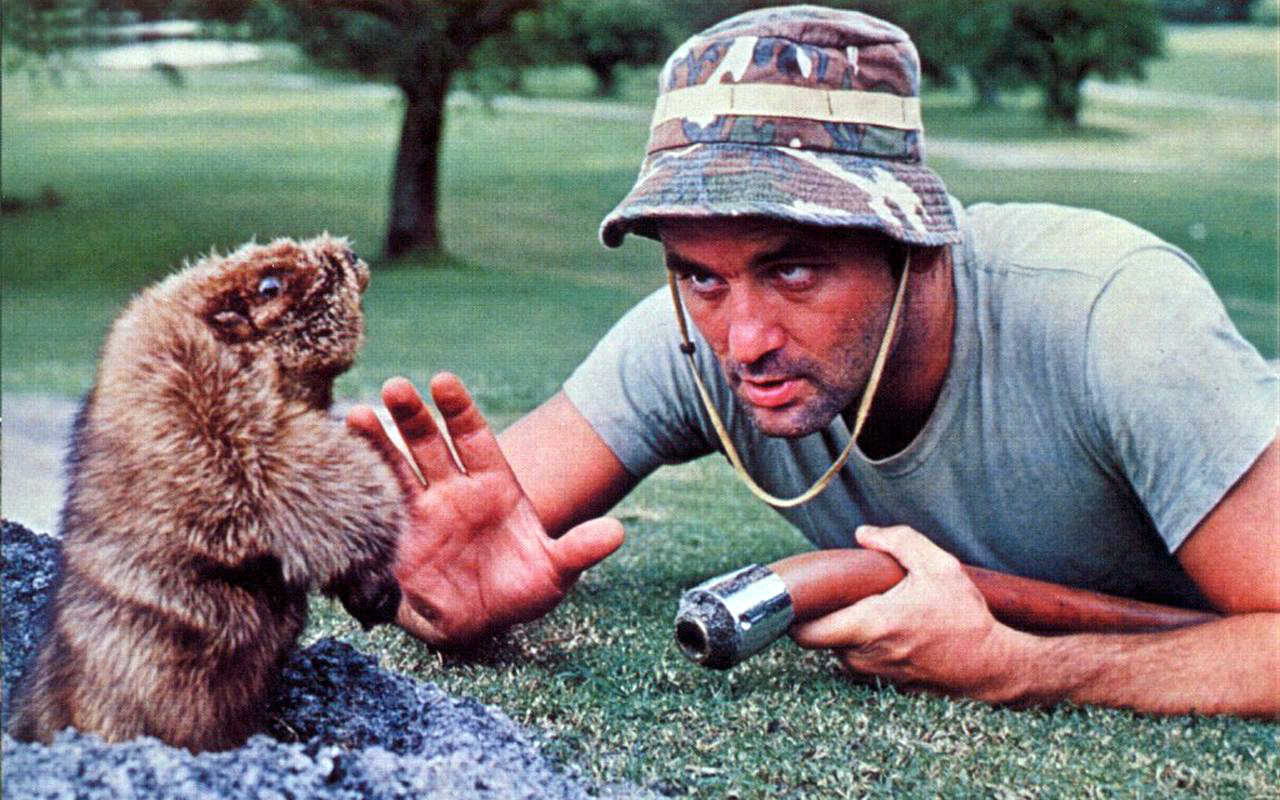 The film’s legacy also perpetuates a love affair between the Murrays and golf. In 2001, the brothers opened Murray Brothers Caddyshack at World Golf Village, home of the World Golf Hall of Fame, in St. Augustine, Florida. The Murray Brothers Caddyshack Charity Golf Tournament has raised over $4 million in its 14-year history. Murray continues to be an avid golfer, after titled his memoir Cinderella Story: My Life in Golf.

Under Ramis’ direction, Chase gave the kind of performance first hinted at during his time at SNL. His Ty Webb (“a sportsman who really knows how to score”) floats above both sides of the film’s class war, before ultimately siding with the slobs. It’s a perfect encapsulation of Chase’s suave yet goofy persona. Reteaming with Ramis again with National Lampoon’s Vacation (1983), Chase played against type as the average American dad Clark Griswold, in the process securing his place as a comic lead in movies. Of course, mistakes would soon once again derail his A-list status. He would be the only star from the original Caddyshack to appear in the sequel.

Later, as Murray appeared in more dramatic work, Chase again contributed to their sometimes contentious history, stating he was unimpressed by Murray’s acclaimed work in Lost in Translation (2003). (According to rumors, Chase turned down lead parts in Forrest Gump and American Beauty.)

Still, Caddyshack features the two SNL stars at curious points in their career. While Chase briefly found his footing as a movie star, Murray was the real star on the rise. A half decade after watching his former collaborator become one of the biggest comedians in entertainment, Murray cultivated a persona that has endeared him to audiences ever since. Chase, while still a fixture in comedy, was ultimately bypassed following Murray’s work during this period, crystallized by their appearances in Caddyshack.