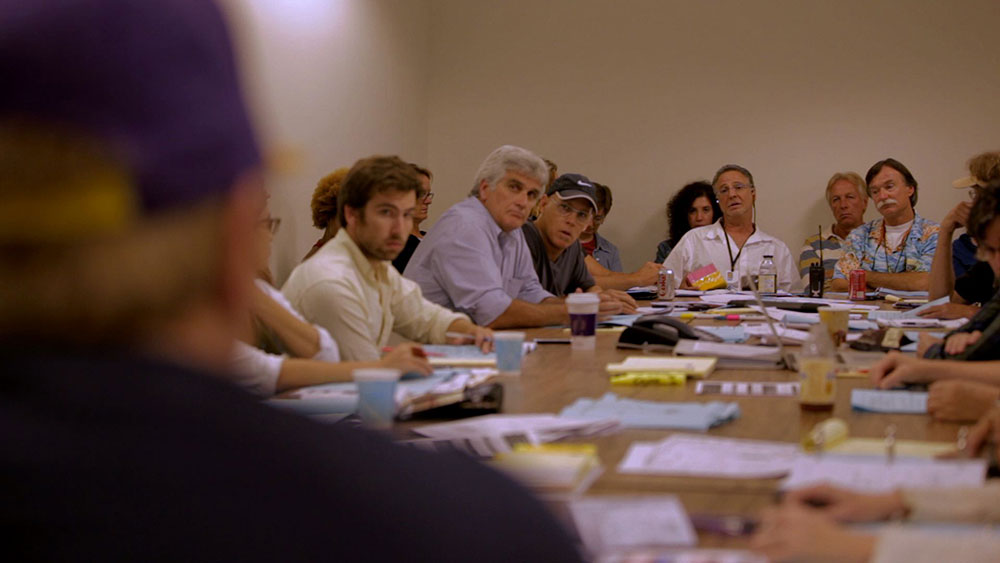 “Showrunners: The Art of Running a TV Show”

If a documentary about how hard successful television writers have it in Hollywood seems the very definition of “champagne problems,” Des Doyle’s Showrunners: The Art of Running a TV Show benefits from the fact that, well, it’s interviewing those writers. Trust that whatever pithy comment you can think up to dismiss their thoughts, these showrunners have already thought of it, plus four more that attack themselves from a different angle. There’s no shortage of stress and heartbreak in this business, but having a healthy level of self-deprecation is what got them there in the first place.

Several showrunners, like Battlestar Galactica’s Ronald D. Moore and Spartacus’ Steven S. DeKnight, openly cop to the fortuitousness of getting a spec script into the right hands through a combination of connections and sheer luck. Hart Hanson (Bones) recognizes that even as the ostensible head of the series, he can still be overridden by the actors if one of them takes a stand on something. Hanson quotes Steven Bochco of pioneering serial drama Hill Street Blues in saying, “The first season, [the actors] work for you. Second season, you’re partners. The third season, you work for them.”

Above all, the interviewed writers consistently defer to the ultimate authority of those holding the purse strings. Compared to the frequent stands that filmmakers take for their artistic integrity, the showrunners make no bones about being beholden to the generosity of studios who pay millions of dollars a week and do so expecting to make back their money. Their respect may be a matter of caution, however, especially given the officiousness of suits like Michael Wright, now-former head of programming for TNT/TBS, who talks with false sympathy about having to cancel shows he likes, miming a phone call in which he tells the head of a show “Road’s over” like the MBA-wielding putz that he is. Wright’s talking head comes sandwiched during the most moving sequence of the film, cobbled together from interviews with Men of a Certain Age runner Mike Royce throughout the shoot that chart the initial enthusiasm over the show’s warm critical reception and its modest but solid ratings through the show’s drop and cancellation.

“Showrunner” is a position that can be simply explained, as evidenced by the textbook definition given at the top of the film, but Doyle uses his movie to explore how the job has evolved with the changing role of television. What might have once been a largely ceremonial, organizational title is now the focal point for paradigm shifts. The film touches upon the contrast between the collapse of high-concept writing in movies and its proliferation on the small screen, the rise of alternative web-based methods of production, and the increased avenues of audience connection (social media, Comic-Con, etc.) that helped make showrunners stars in the first place. Doyle even broaches the subject of the increased attention paid to making TV more diverse in the writer’s room and in front of the camera, tackling the ethical and artistic responsibilities that come with being a modern showrunner, not just the practical duties.

Documentaries such as these often fall decidedly into the “by fans, for fans” category, glorified excuses to hang out with the likes of Joss Whedon or Kurt Sutter for the pleasure of special con screenings. Showrunners, on the other hand, would make a good fit in the WGA showrunner training program glimpsed throughout the film. It’s perhaps damning with faint praise to say of a documentary that it works best as a classroom screening, but Showrunners has more to say to the would-be backroom star than the geek who can rattle off production codes with ease. It concisely maps the career and even the emotional structure of its eponymous occupation, letting any enterprising kid know not just what a showrunner does but the years it takes to get to that position, and how you keep going if (or, really, when) the series you head gets the ax.