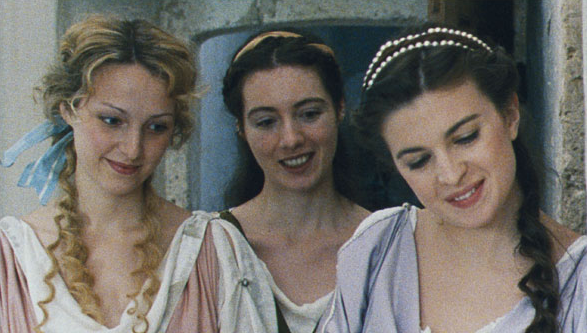 Shelf Life: The Romance of Astrea and Celadon

Éric Rohmer’s final feature, The Romance of Astrea and Celadon, is, in its own way, as appropriate a send-off for the director as one could desire. From its literary/silent-filmic cutaway title cards to its depiction of lovers erecting barriers around their desires with articulate overthinking, The Romance of Astrea and Celadon elegantly demonstrates Rohmer’s capacity for blending the classical with the modern, of paring down film until it nearly devolves into a prior artform, only to let slip such subtle mastery of form until the term “cinematic” seems to apply more to his talky romances than the largest spectacle in a megaplex. That he accomplishes this with an intentionally overwrought love story set in 5th-century Gaul is but one last testament to his skill.

Well, let me back up: the film does not take place in 5th-century Gaul but, as an introductory text scrawl informs the audience, a 17th-century interpretation of 5th-century Gaul, for Rohmer adapts Honoré d’Urfé’s novel L’Astrée. That clarification nearly breaks the fourth wall, a mildly reflexive touch exacerbated by a voiceover narration that inconsistently creeps into the soundtrack. By including that extra bit of information, Rohmer acknowledges the distinction between archaic life, or any life at all, as it truly was or is and how art presents it.

That frees the director to deliberately play with the conventions not only of his own story, but the period drama in general. Where the genre tends to play up the art direction involved, with sets, locations and costumes rolled out in pageantry, Astrea and Celadon mostly takes place in shots out on plains and in woods, filmed by a camera that remains on a tripod as it gently pans and tilts, if it moves at all, to capture each scene. Simple, flowing tunics and verdant backdrops replace the usual accoutrements, and instead of playing up the supposed verisimilitude of the recreation, the same opening text that admitted its source cops to shooting in a different location than the one described by d’Urfé because urban development has since transformed the original plain.

What remains of the genre is its arch dialogue, spoken in highly formalized French and translated into equally florid English. The richness of the characters’ eloquence certainly fits with Rohmer’s corpus, and it equally meshes with the histrionic romance between the two “well-born” shepherds of the title. Their love spasms into fits of poetic sorrow when Astrea misinterprets Celadon’s involuntary kiss with another woman and banishes him from her sight, leading to suicide attempts and a unnecessarily complicated moves toward reconciliation. The loftiness of their words reflects the chivalric codes that dictate their behavior, but it is hilariously incongruous with the pastoral simplicity of Rohmer’s direction. These are druidic free peoples not yet tamed by Roman occupation, but they speak like Arthurian nobles. Yet again, the 17th century betrays its subjective rendering of the 5th.

The comedy does not stop there, however. After plunging off a gorge in suicidal despair, Celadon is discovered and rehabilitated by a group of nymphs whose robes always seem to slip off one shoulder to reveal a breast. The nymphs clearly want to have their way with this handsome shepherd—a classical painting of Cupid seductively having hot oil dripped on him often hangs in the middle distance between a nude, bed-ridden Celadon and the onlooking women—and the pull of temptation feels less like romantic drama than the Sir Galahad segment of Monty Python and the Holy Grail. Similarly, when Celadon decides to cross-dress as a means of getting circumventing the banishment he accepts with solemn loyalty cannot help but recall Some Like It Hot. Gender-bending dynamics routinely come into play in the story, with the nymphs toting Celadon into their chateau with ease, a nervous Celadon fretting that his “flat chest” will cause problems with his dress, and a finale that traverses Sapphic territory to reunite two heterosexual lovers.

By introducing such elements without turning the movie into a wild parody, Rohmer upends tradition while by smoothly supplanting it for more modern sensibilities. One gets the sense from The Romance of Astrea and Celadon that it sketches out a history for the romance genre, of Big Misunderstandings and melodramatic commitment to a lover’s duty stretching back centuries to the present. But Rohmer also finds time for his deeper philosophical ruminations, from a diversion on mono- vs. polytheism to more pertinent questions about the epistemology of love that weigh the merits and incompatibilities of committed monogamy and free love. Rohmer’s characters often philosophize about desires they are too afraid to act upon, and if the people here do not plunder the same depths of self-analytical (and self-deluding) treatises on their romantic urges as in, say, My Night at Maud’s, their light-hearted but earnest debates and actions close the book on one of the French New Wave’s most masterful, form-breaking talents by laying an ancestral foundation for all his films that came before it.