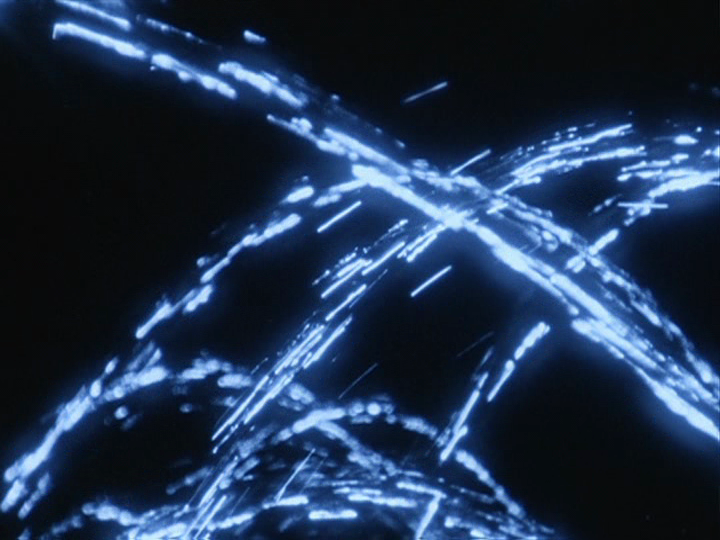 Confrontational in their subject matter and surrealistic in their composition and movement, Kenneth Anger’s films nevertheless provide an accessibly invigorating entry point into the realm of the avant-garde. Experimental cinema can be nearly impenetrable, formally exploratory works cryptically obsessed not merely with the properties of film as movement but of film as a physical property (or, more, recently, film as an intangible collection of data sequences). Yet Anger’s oeuvre is one of sensual, tactile communication, a raw nerve expressing the sexual undercurrents of a repressed society until the seamy nature of their exposition is revealed to as natural as its impulses truly are.

The Films of Kenneth Anger, Vol. 1 collects five of the director’s early efforts, all of which show, to varying degrees of success, the filmmaker’s daring placement of socially unacceptable elements into film, and how his erotic frenzies contain more evocative hidden layers. Breakthrough Fireworks (1947) turns a homoerotic reverie into a rapacious nightmare that horrifically enjoins the symbolic imperialism and latent homosexuality of the navy. Its underground sexual prison contrasts with the more open constraints of Puce Moment (1949), which anticipates a decade of “women’s pictures” and their attendant social commentary in a colorful dance of dresses sliding off the rack and gaining no more sense of agency and personality when a woman finally inhabits one of them.

Social/sexual commentary becomes heretical in the other three films, all of which springboard off of rampant occult symbolism beautiful in their ornateness but discordant with the Judeo-Christian values of contemporary (and modern) mainstream film. Rabbit’s Moon (filmed 1950, released 1972) plays such symbolism as a magical fable, but the sexual openness of paganism and Aleister Crowley’s Thelema creeps into Eaux d’Artifice (1953) and Inauguration of the Pleasure Dome (1954). The former’s shots of bubbling, spewing fountains connotes both orgasms and the urophagia that prompts them, while the latter serves as a kaleidoscopic picnic of pagan and mythological figures colliding together with footage of the 1911 Italian version of Inferno to suggest the whole shebang takes place in Hell, and, implicitly, Hell is thus the wilder and more interesting of the afterlife parties.

Anger’s approach to sexuality and the occult has lost none of its power in its application through aesthetic structure. If his films entered into the avant-garde for bringing such subjects to light, they remain there for depicting them so directly, outside the confines of narrative and message. Like many experimental movies, the five shorts included in The Films of Kenneth Anger, Vol. 1 are all silents (though unlike many, they do feature exuberant soundtracks of music), but this only reflects their ineffable qualities of emotional and erotic expression. Avant-garde cinema is often considered, wrongly, a genre—such a typifying limitation is one of the things it overcomes—but as an introduction to a loose mode of filmmaking, these five shorts provide an excellent starting point, as well as a display of the wealth of style and feeling intellectually probing work can contain.

The Films of Kenneth Anger, Vol. 1 is available from Fantoma on Region 1 DVD.

2 thoughts on “Shelf Life: The Films of Kenneth Anger, Vol. 1”