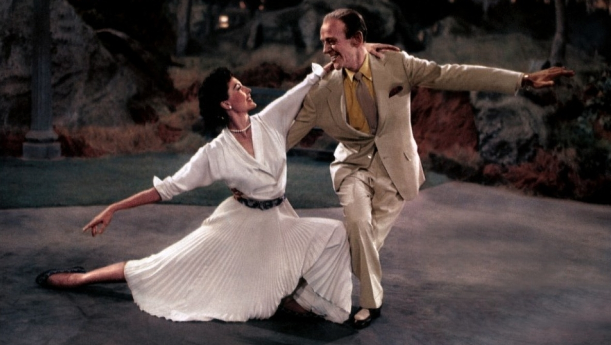 When The Band Wagon made my list of the best older films I saw for the first time in January and February, I got into a brief discussion about it on Twitter with two great film writers, Adam Kuntavanish and Movie Mezzanine contributor Peter Labuza. A question of preference between this film and Singin’ in the Rain (and, by extension, between Fred Astaire and Gene Kelly’s respective dancing styles) ensued. I was drawn to this particular exchange between Adam and Peter:

@adam_the_k @notjustmovies Which is interesting, because SINGIN is the more high class feature, BAND WAGON is a bit more vulgar, ya know?

Peter succinctly captures what makes The Band Wagon so great. The two films approach the idea of film from opposite angles. Singin’ in the Rain, with its playful tweaks at the upheaval brought on by sound in film, tinkers with the limitations of cinema as a technology, limitations that are merely redefined, never eradicated, by the addition of new breakthroughs.

The Band Wagon, on the other hand, takes place outside of Hollywood; its protagonist, Tony Hunter (Astaire), even leaves Tinseltown to go back to his roots on Broadway. Yet when the light musical romp planned by Tony’s old chums (Oscar Levant and Nanette Fabray) gets handed over to pompous theatrical director Jeffrey Cordova (Jack Buchanan), chaos ensues that could only be captured through cinema.

In Jeffrey’s hands, a musical comedy turns into a protracted Faust production that doubles as a sly dig at the supposed artistic superiority of white elephant drama over lighter, more populist fare and, eventually, a demonstration of cinema’s potential for extending the possibilities of theatre. By converting a comedy into a psychological epic, Jeffrey robs the material of its true power, and rehearsals of the behemoth he concocts show the stage collapsing from its strict physical limitations, at which point cinema must step in to give it room to breathe.

This point is hammered home by the last act, which takes the delicate, playful dance sequences peppered throughout and explodes them into a concentrated barrage of dizzying numbers that culminate in “Girl Hunt Ballet,” a segment that recasts noir as a phantasmagoria of color and movement, frozen in a time-specific genre and outside entirely. As a past-50 Astaire dances like a man half his age with Cyd Charisse against shifting backgrounds of obvious flatness and impossible depth, the grounded mechanics of Singin’ in the Rain give way to the boundless possibilities those mechanics empower. If Singin’ pays tribute to the musical as the form that best tests cinema’s limits, The Band Wagon suggests that the musical is the natural form of a medium whose only truly limits are talent and imagination.