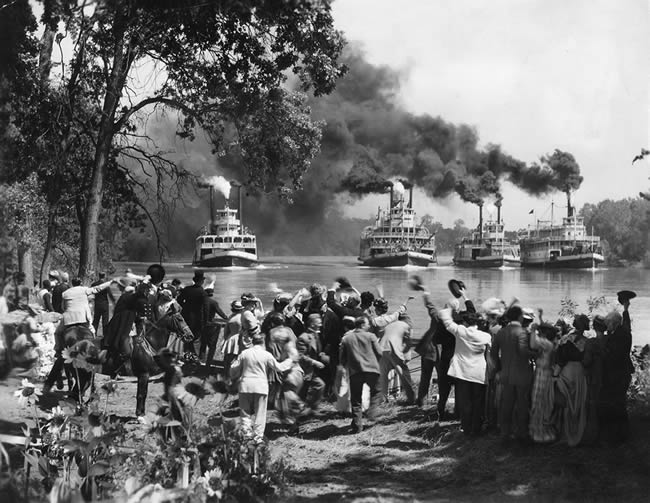 Shelf Life: Steamboat Round the Bend

These two lines, laid matter-of-factly over a picturesque shot of a steamboat lazily rolling down the Mississippi, serve not only as an introduction of setting for Steamboat Round the Bend but a kind of “plot” synopsis. John Ford’s 1935 comedy, and his final partnership with satirist-actor Will Rogers, runs the gamut of narrative activity that includes a cornpone version of Capulets and Montagues, a winner-take-all race between rival steamboat captains, and a potential hanging. Yet its movement is languid and steady, the hiss of steam and churning of paddlewheels an ambient backdrop for a lethargic, relaxing ride.

Comic juxtapositions introduce the picture, establishing character a tone through oppositional beguilement. In a boldly satiric juxtaposition, he links the firebrand evangelical oratory of the temperance-preaching New Moses (Berton Churchill) with the beguiling salesmanship of conman/steamboat captain protagonist Dr. John Pearly (Rogers). New Moses gets a sobriety pledge from a reluctant sot (Ford brother Francis in maybe his finest drunk role), who then gets a whiff of the “tonic” John is selling and smiles as if meeting an old friend.

In short order, John’s nephew, Duke (John McGuire), comes along toting his new fiancée, Fleety Belle (Anne Shirley). Ford’s framing of the three, Duke and Fleety Belle typically in the foreground with John in the middle- of foreground looking away from the couple, introduce the conman’s reservations about the girl’s “swamp folk” roots as much as the testiness that creeps into his voice. That mistrust hangs over the scene, and Duke lets mention of a man he killed in self-defense as he eloped with his lover.

Yet Ford negates these elements as fast as he introduces them. John and Fleety Belle bond when he gives her his sister’s old dress and bonnet, and the uncle takes Duke to turn himself in to the sheriff, who trustingly throws down the cell keys from his upstairs bedroom for Duke to let himself in. By this point, the film is so settled into its groove that when Duke’s trial goes south, the turn for the worse fits so poorly with the rest of the film that it is not shown at all, Ford instead cutting from John’s optimistic outlook on the trial to his puffed chest deflated by reality as he sits humbled with Fleety Belle.

At times, it seems as if the movie itself got a bottle and obeyed John’s instructions not to do any work while medicating. Like so many of the best Ford films, Steamboat does not prioritize event so much as situational response by characters. The situations themselves would constitute the meat of most movies, but Ford uses them like premises for improv sketches: merely the jumping off point, not the goal. Duke’s precarious legal standing, which leads to a race to find New Moses (the witness who can exonerate him) that is in turn folded into a rival boat race between John and another captain for the other’s ship, bursts with narrative momentum instantly transferred into less propulsive sections. 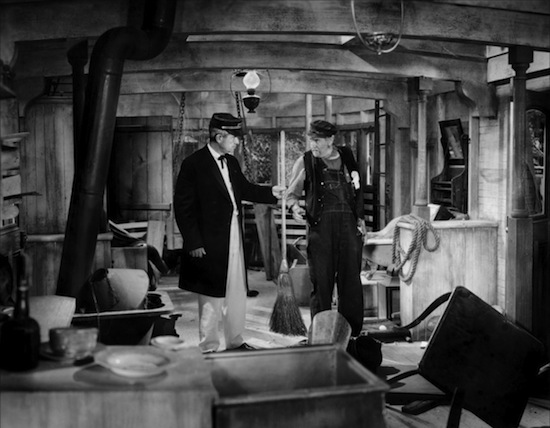 One such diversion comes in the form of a tacky wax museum that shades in the film’s social context while raising money for lawyer fees. The swamp/river dichotomy introduces stratification, but the financial and intellectual poverty of the region is hammered home with the attraction, in which visitors stand respectful before wax figurines and reverently ask for locks of hair to remember the great heroes. For these simple folk, the wax recreation might as well be the real thing, but since the likes of Washington exist more as tall tales than historical mortals anyway.

This gentle satire builds to its apex through the presence of Stepin Fetchit, who gets one of the best showcases of the self-awareness embedded into his controversial persona. Discovered hiding in the mouth of the fake whale, Fetchit introduces himself with the name he adopted for himself, George Lincoln Washington, an identification with the freedom those presidents symbolize. But John instantly renames him Jonah,and Fetchit tries to win back some of the identity taken from him by slyly angling to keep Grant’s uniform for himself when John refashions the wax statue as Robert E. Lee, possibly to honor the president who, for all his corruptibility, did the most to enact the most progressive aims of Reconstruction.

Nothing compares, though, to the scene in which the crowd gathers awestruck around that garishly refashioned Lee, staring at him with reverence as Fetchit turns the crank on a mechanical minstrel show. The sight and sound of Fetchit tunelessly drawling the words to “Dixie” next to roughly painted black faces robotically strumming banjos as a white crowd fights back tears looking upon “General Lee” may be the most concise summation and hilarious travesty of the South’s woefully misplaced pride ever put to celluloid.

Such diversionary elements truly move the film, though often Ford employs even subtler details to capture his milieu, such as the way John practically turns into another person when he takes off his salesman hat and puts on his captain’s cap, or the mild tremor Rogers puts into his voice when he first pegs Fleety Belle for being “a swamp gal.” John’s talk (and Duke’s tacit agreement) of the superiority of river life fades out in a shot of Fleety Belle looking out over the Mississippi, the moonlight reflecting on the water as if making a path of light leading back to a densely overgrown patch of land hints that the young woman is not so eager to leave behind what she knows.

The climactic steamboat race ties such threads together, using the stakes of the race and of Duke’s life hanging in the balance as a crucible to focus these small character arcs: Fleety Belle’s exuberance at the ship’s helm, John’s wily charisma, even New Moses committing his oratory to action when he gets to destroy cases of Pocahontas to provide super-fuel for the steamboat’s boiler. The latter highlights the manner in which Ford draws action from character, not vice-versa, a trait crystallized in an exchange between John and New Moses when the former pulls the latter away from proselytizing to clear Duke. “I’ve got souls to save!” protests New Moses in lofty righteousness, to which John curtly replies, “No, you’ve got a life to save.”

Steamboat Round the Bend is available on Region 1 DVD as part of the Ford at Fox Collection/the smaller Ford’s American Comedies collection of the same set. It can also be found as a standalone Region 2 DVD.