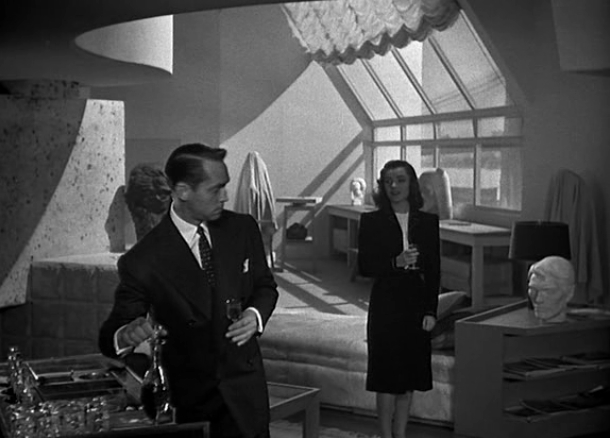 Shelf Life is a weekly feature from that selects a film currently on DVD/Blu-Ray for review.

Anyone who has seen Robert Siodmak’s The Killers knows the director’s gift for shadows. With his cinematographer, Elwood Bredell, Siodmak cast the extrapolated adaptation of Hemingway’s short story in a realm of plunging darkness, where so little light dwelt that any luminescence seemed more the thin shadow of the inky void itself than the other way around. It makes for an atmosphere of dread that stands out even among the smoke-and-shadow world of film noir, and the opening segment in particular is a high-water mark for noir style.

Phantom Lady, made two years prior to The Killers, pairs Siodmak with Bredell for the first time (The Killers, sadly, would be the last). The fruit of their collaboration is instantly apparent: though it lacks The Killers’ depth of blackness, Phantom Lady achieves something singular with its shadows and murky plot. This is not a film that communicates the borderline (and sometimes outright) nihilism of film noir. No, this is a film that unfolds in a nightmare vision of the genre, like the projected dream of someone who fell asleep with Spillane or Hammett still on the brain.

Out of its oneiric blackness comes Scott Henderson (Alan Curtis), a man who walks away from an anniversary quarrel with his wife and ends up using tickets he’d bought for her to take a mysterious woman to a show. They part ways and Scott returns home, where a detective turns on the light for him and announces that the man is under arrest for the strangling murder of his wife. When Scott tries to provide an alibi, he is terrified to realize just how little he learned about the woman he spent time with that evening, and how much less everyone who saw him that night remembers her.

That woman’s disappearance back into the endless night that spawned her is the first indication that Siodmak’s film will not operate on the same horrific, real level as The Killers. His use of shadow in this film does not communicate the usual moral shading or plot intrigue of noir but the slippery consciousness and abstract grasps of sleep. This is especially true when Scott’s lovesick secretary, Carol “Kansas” Richman (Ella Raines), moves to clear Scott’s name, though Raines plays the part with such zeal that Kansas almost seems to be exacting revenge for her doomed beloved.

As she stalks witnesses who may or may not have set Scott up, the world practically upends around her single-minded quest, swallowing some people whole and spitting out others. These spectral figures are usually obscured by shadow in such a way as to be intensely present yet vague and unplaceable, shades of evil both tactile and immaterial. This can especially be seen when silhouetted men emerge from hidden stoops to align with Kansas as she stalks the barkeep who saw Scott and the woman but testified otherwise. Only on occasion does the film pull into sharp focus, such as an outlandishly erotic sequence where Kansas seduces the drummer who similarly swore he never saw the woman accompanying Scott. As Kansas beckons, Soidmak cuts to a low-angle shot that places Raines’ dangling leg in the foreground as the drummer goes increasingly wild in the background. Like so many dreams, Phantom Lady always slips away from one’s grasp right when the fingers close around it, yet the close-ups of her sultry face and his desperate rictus leer makes the fever vision all too tangible at the most uncomfortable moment.

As the pieces begin to fall into place and a conspiracy is unraveled, Phantom Lady moves fully away from the Kafkaesque thriller that befell Scott at the start and reveals itself to be Kansas’ protracted fantasy; a tortured, increasingly nonsensical journey to get her dream man (hilariously, but also touchingly, the only element of the film who seems so banal and ordinary in this flight of fancy). To get Kansas to that point, figures coalesce from the shadows and are reclaimed by them as the body count rises.

Yet just because this strange tale might all take place in Kansas’ head does not mean that some of the threats she faces fail to make a concrete impact. This is especially true in the climax, where she finds herself confined with the real killer in a room that makes the artificiality and thin construction of this reverie all the more apparent. When Kansas realizes who the person in the room with her really is, she sprints back toward the door as her footfalls echo on this blatantly false set and runs up against a wall that does not budge but looks like a flimsy plywood backdrop. The moment is terrifying, showing the woman trapped so deep in her own imagination that it may destroy her. Yet the most truly disturbing bit of the film may be its “Hollywood ending,” communicated in the runoff groove of a recorded dictaphone message. Its looped joy is the film’s giddiest yet most perverse artifice, a scratchy, tinny payoff of Kansas’ wildest dream that seems like such hollow justification for the mayhem that led to it.

Phantom Lady is available from the following distributors: