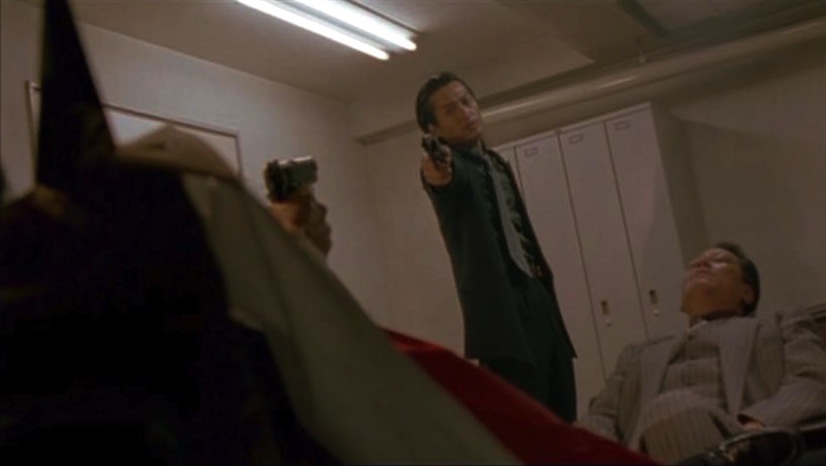 Takashi Miike’s freewheeling genre-hopping and jaw-droppingly prolific rate of production give neophytes so many access points that there almost may as well be none at all. For those of us who came to the Japanese filmmaker (and nearly never returned) via his hyper-violent, cult horror films Audition and Ichi the Killer, the barrage of comedies, musicals, even children’s films can be as disorienting as the grisly sights of his alienating breakthroughs. And that leaves out how many of his films transgressively blends ill-fitting types, such as the “horror musical The Happiness of the Katakuris. I confess to being so daunted by Miike’s filmography that I have only recently set out to truly explore it.

A particularly good introduction, though, is his 2002 yakuza feature, Graveyard of Honor, which has all the style so instantly apparent in any Miike film and all the grim subject matter without the gore. Granted, the film does end with a cascading shower of blood, but it almost seems some sort of concession on the director’s part to an audience whose auteurist members would have spent the preceding two hours waiting for all the carnage. No, though there are killings galore in Graveyard of Honor, the physical violations of its violence are largely swallowed back into the film’s muted-jazz vibe, much like the outbursts of its central character are terrifyingly abstracted by his dead, unemotive eyes.

Miike moves backwards from that character’s suicide, cutting at the midpoint of his leap off a prison tower to how he reached that point. The journey is a tortured one. Indeed, we meet Ishimatsu Rikuo (Goro Kishitani) not as a dark-haired gangster but a blonde-dyed dishwasher. One night, a local yakuza boss, Sawada, comes in to dine and is ambushed by an assassin for a rival family. A shootout ensues between bodyguards and killers, but it is the humble dishwasher who saves Sawada’s life, earning him an immediate entry into the yakuza and a high-ranking position. The grumbling of subordinates who paid their dues with years of loyal service hint at the disruption Ishimatsu will bring to the yakuza, as well as how the seemingly rigid, centuries-old traditions and rules of the criminal class can be worryingly flexible according to the whims of its superiors.

Soon, however, Ishimatsu wreaks outright havoc on those codes of conduct, to the point that the yakuza begin to fear for their entire system of thought and action. Cutting his hair short and reverting to his natural color, Ishimatsu looks the part in a slick suit, but he quickly acts outside the acceptable behavioral range of even a collection of gangsters. He literally kicks around subordinates and offers no respect to those he usurps. His casual dispatching of rival bosses tests uneasy truces, but it is his eventual betrayal of his own godfather that shows just how uncontrollable he is. Inverting Eddie Izzard’s bit on the difference in cultural perception of most murderous despots and Hitler, where the yakuza build romantic images of themselves from killing others, yet it is only when one man kills his own that people take notice.

Nevertheless, it is not Ishimatsu’s internal chaos that proves the most repulsive. If anything, such moments reveal the gangster at his mildest. No, he is at his worst when performing actions that keep him within the “normal” bounds of yakuza behavior. Ishimatsu receives a meek young virgin almost as a gift, and Miike shows more than one grisly scene of Ishimatsu using her as a toy, eerily mirroring the hymen blood that covers his hand after he rapes her the first time with a later scene of the killer, still soaked in the blood of an enemy boss, coming off the high of his violence by taking her once more. Likewise, his refusal to cooperate with authorities, even at the instruction of yakuza retainers looking to get him a reduced sentence, is merely an exaggeration of the insipid masculine code by which these men live, not a radical departure. By pushing just over the line and playing these grotesque actions against his “relatives,” Ishimatsu makes unbearably clear how thin and fragile that line is, and his peers do everything to stop him before he deals irrevocable damage to the very concept of a yakuza.

The graveyard alluded to in the title attests to the hypocrisy of this profession, built on a code of honor that has filled more holes in the ground than Ishimatsu can on his own. Miike’s aesthetic, balancing stylish violence with a muted color scheme that seems to circle around the gravitational pull of the black holes Goro has for eyes, undercuts its own cool at every turn. This is reflected in the score, elegiac jazz that sounds like a takeoff from Miles’ mournful, paranoid Elevator to the Gallows soundtrack rather than the more energetic, streetwise scores of the New Wave. The graveyard has just enough room left for honor itself, and Miike’s film is a cold swan song for it. “A yakuza without honor isn’t worth shit,” crows one mob boss, but Ishimatsu’s amorality demonstrates not the truth of this statement but the obvious revelation that no yakuza is worth shit.