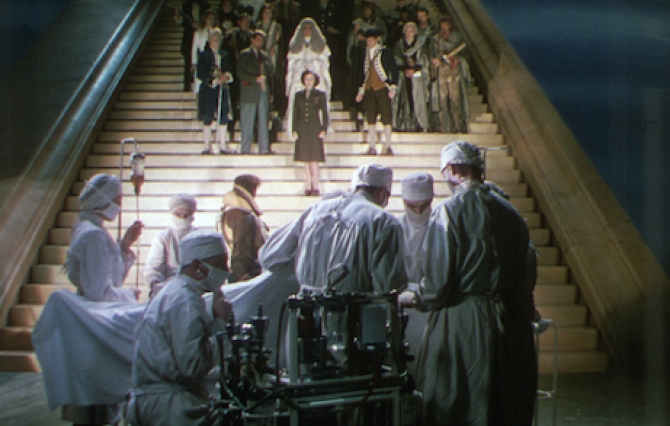 Shelf Life: A Matter of Life and Death

Michael Powell and Emeric Pressburger’s run of films in the 1940s marks one of the all-time great cinematic hot-streaks. Joining forces on a set of propaganda films that displayed an increasing level of humanism and poetry, the Archers emerged from the aftermath of World War II as masters of spectacle enhanced, not weighed down, by their spirit and truth. The updated national myth of their Canterbury Tale, the vivid critique of Black Narcissus and the psychological recasting of the artistic drive as death drive in The Red Shoes all blend seamlessly with expressionist shadows, visceral empathy and, where applicable, the greatest color to ever grace film.

Not to be forgotten is 1946’s A Matter of LIfe and Death, an exemplary major-minor about a British pilot, Peter Carter (David Niven), who should have died in a crash but inadvertently eluded death with the help of London’s fog, so thick even angels cannot see through it. By the time this oversight has been corrected, Peter has already fallen in love with an American radio operator, June (Kim Hunter), and demands an appeal for his life. This takes the form of a courtroom drama that eerily mirrors the operating theater where doctors work on Peter’s head back on Earth.

The alternation between color and monochrome here is key. Even the Wikipedia entry for the film makes note of the Wizard of Oz-esque way this narrative plays out, noting that it reverses Oz’s use of black-and-white for the scenes set in reality and color for the reveries of its fantasy. But that reversal is key: for a girl stuck in a dead farm reeling from the double blow of the Depression and the Dust Bowl, a phantasmagorical realm brought on by blunt force trauma to the head must have been magical indeed.

But A Matter of Life and Death occurs in an England that can see the light at the end of the tunnel of the war that has ravaged it. In a twist so sly its subversion does not fully hit home until after the film ends, Powell and Pressburger cast heaven (or, at least, heaven as Peter possibly hallucinates it) as the drearily monochromatic plane of existence while Earth, for all the traumas it was still enduring, has the hope of a nation exiting a war and of two lovers finding each other communicated in gorgeous Technicolor.

Powell/Pressburger’s 1940s work reflects their nation’s cinematic soul during that decade the way Nicholas Ray and Sirk broke apart and scrutinized ‘50s America as a military-industrial showfloor or Godard’s ‘60s output shows the birth, rise and fall of radicalized postwar youth as if in real time. But the difference between films like Bigger Than Life or Pierrot le fou and A Matter of Life and Death could not be more vast: the Archers’ production spares more than a few instances of grounding cheek, aimed both at Britain and her unlikely partnership with its formerly rebellious colony, yet the tone is ultimately one of perseverance and celebration. The British pilot arguing passionately for his life is selfish, yes, but what else can matters concerning the existence of the Self be? There is a quintessentially British view of the necessity of living one’s life to the fullest embedded here, the idea that one cannot leave our worldly plane behind until all “commitments” have been honored. From that almost bureaucratic phrasing comes one of the great romantic visions in cinema.

Thinking of upgrading your copy of A Matter of Life and Death to high quality Blu-Ray? Avoid the double dip by heading to Music Magpie, where you can trade in your old DVDs and Blu-Rays for cash. Visit www.musicmagpie.com to start selling in your old DVDs now.