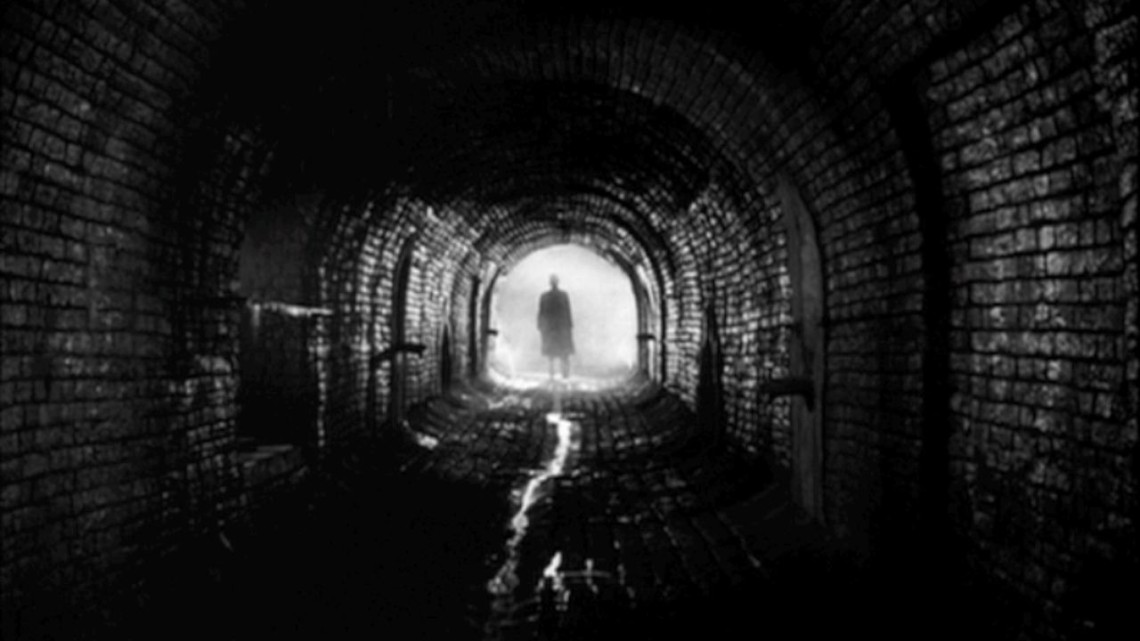 In this column, Asher Gelzer-Govatos analyzes "The Third Man" from the perspective of its literary-tinged lead character, Holly Martins.

Despite the fact that the internal nature of writing makes its depiction on screen rather bland, movies return again and again to the writer as a favored occupation for characters. Each column of Screen Writing examines a different film and its depiction of the life and work of an author, in the process exploring the importance of the written word for a visual medium. 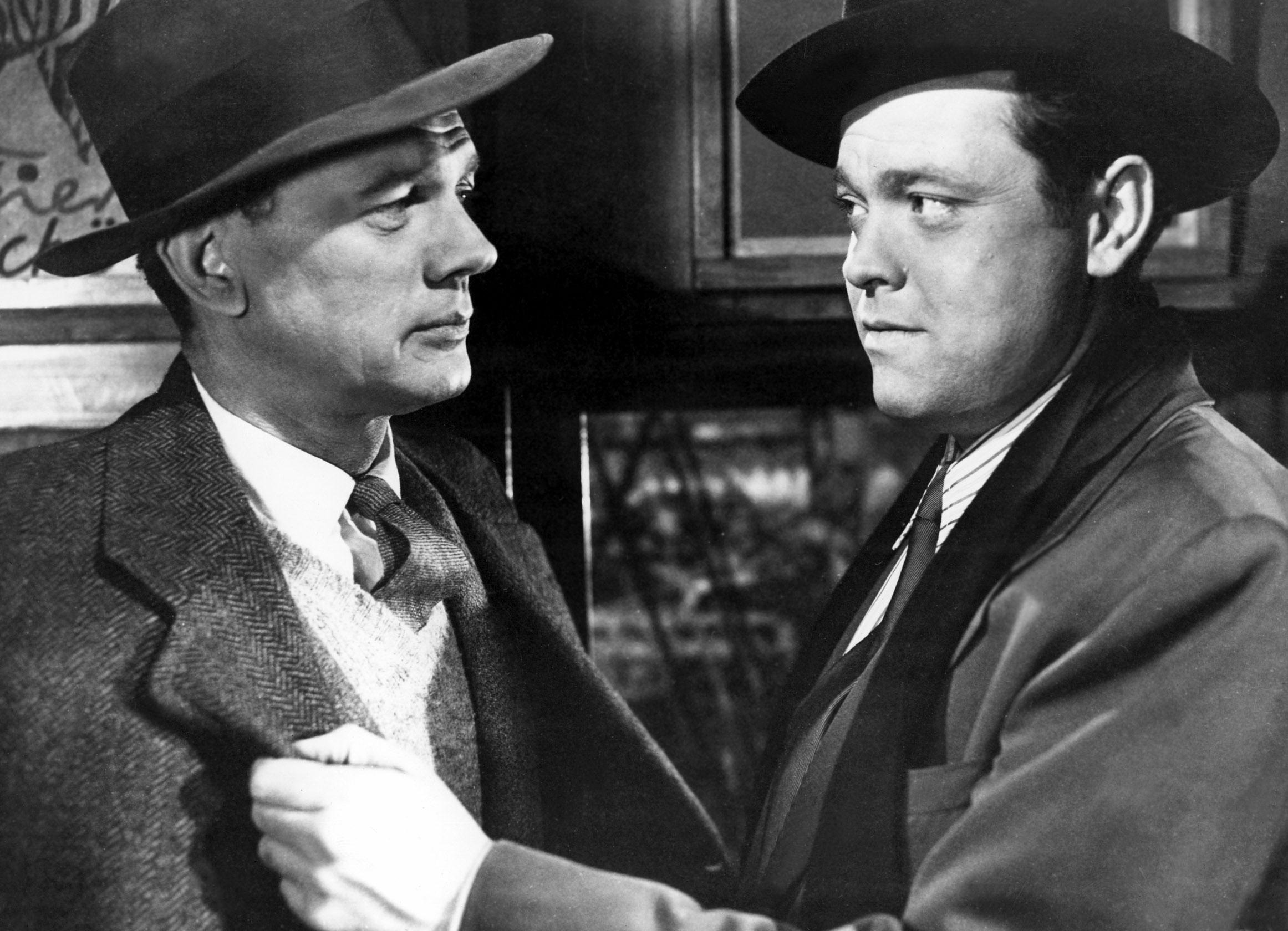 Auteur theory’s a hell of a drug. That’s the best explanation I can come up with for the continued shadow Orson Welles has cast over The Third Man, Carol Reed’s 1949 noir. Despite playing a role that barely exceeds a glorified cameo, Welles has remained the primary reference point for the film. In part, that’s because of the film’s unforgettable introduction of Welles’ Harry Lime, suddenly illuminated in a darkened doorway, Jack O’Lantern smile spreading slowly up his face (an image so iconic that it has assured Welles’ place as the film’s literal poster boy for the foreseeable future). But there’s also a nagging sense that a director as talented as Welles must have had more to do with the film’s unique aesthetic than simply showing up and electrifying the screen with effortless charisma. It’s a common rumor that Welles had a hand in directing the film, one that’s a slap in the face to Carol Reed, a very fine director, but common enough that Jonathan Rosenbaum had to spend time refuting it in his book on Welles.

The one contribution Welles definitely made to the film was his line, famously ad-libbed, about cuckoo clocks. It’s a great line, equal parts pithy and profound, but it’s made even more memorable by Welles’ tossed-off delivery. No wonder it’s stuck with viewers as the line representing the whole film. The irony of the cuckoo clock speech’s continued fame, though, is that it has helped obscure the rest of the screenplay, penned by one of the 20th century’s most insightful novelists, Graham Greene.

Greene famously applied a dichotomy to his books: those rightly considered novels; and his less serious works, which he labeled mere “entertainments.” On the surface, The Third Man would seem, with its genre trappings and snappy dialogue, to fit into the latter category. This classification gets complicated, however, by the precision with which Greene explores the major themes of his story, which include the difficulty of communication in an age of isolation and the moral choices offered by a consumerist age. Greene penned The Third Man near the end of one of the strongest decades of novel writing ever. From 1938 through 1951, Greene wrote four staggeringly great novels — Brighton Rock, The Power and the Glory, The Heart of the Matter, and The End of the Affair — as well as crackling entertainments like The Ministry of Fear. This decade, usually referred to as Greene’s Catholic period, comprises his most complex and satisfying writing, and The Third Man stands up to the best of his novels in its off-kilter vision of evil and moral agency.

The real secret, though, is that The Third Man is both a serious work and an entertainment, melding the moral seriousness of the former with the pulsing energy of the latter. Greene offers a clue to this marriage of high and low through the film’s protagonist, paperback novelist Holly Martins (played with appropriate naïveté by Joseph Cotten). In a delicate balancing act, Greene places Martins in the middle of the novels-entertainments spectrum: He writes entertainments and lives life like he inhabits one, but finds himself enmeshed in the murky moral worlds Greene usually explores in his novels. 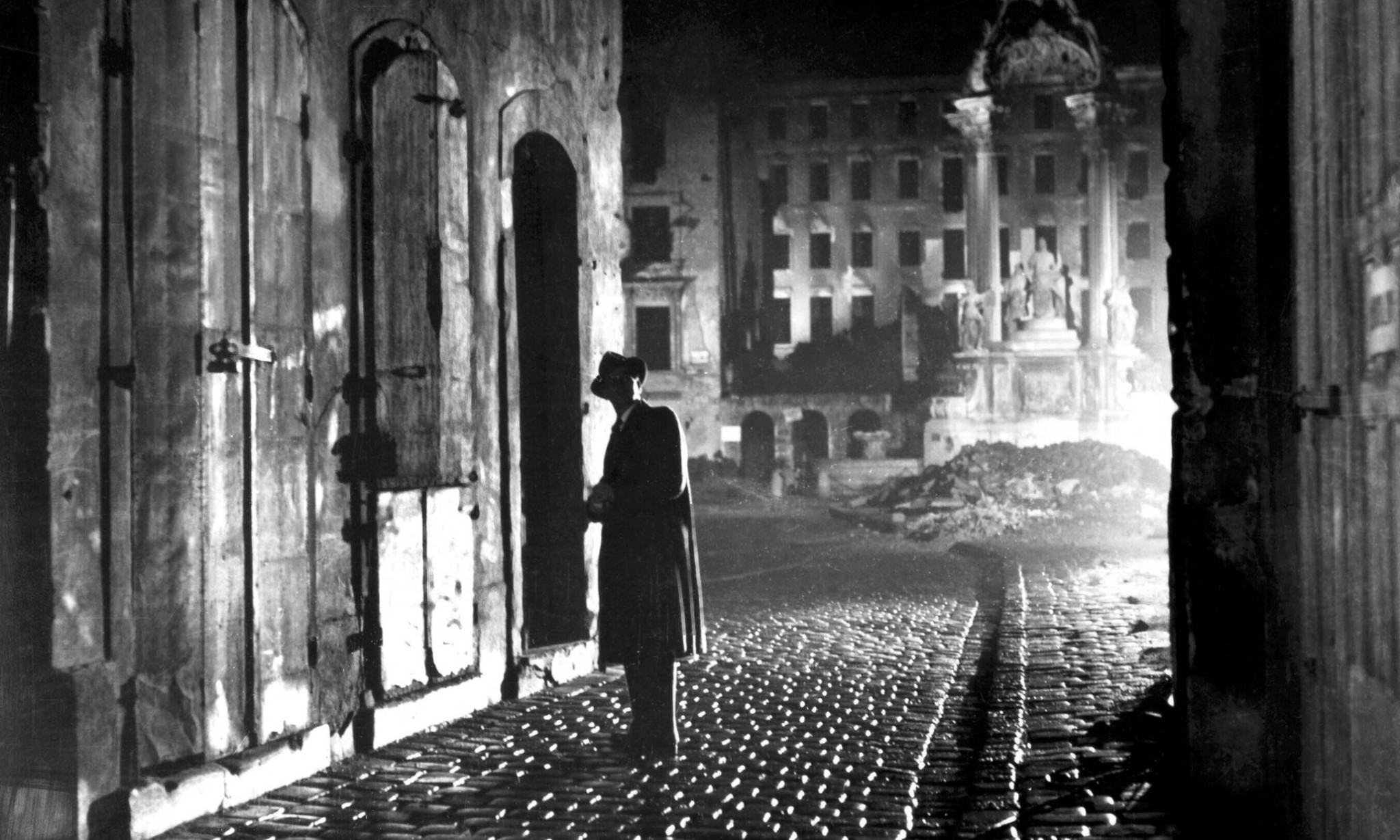 In this sense, the choice to make Martins a writer is crucial, given that his investigations into the seedy underbelly of post-World War II Vienna require him to navigate between his own world and one entirely alien to him. To write fiction, especially, is to take a step into the unknown. Not for nothing do most writers lead prosaic lives (the occasional Hemingway excepted): The creative act required to craft great fiction requires an energy and detachment that implies a certain reclusiveness. By making Martins a writer, then, the film positions him as someone who should be ideally positioned to investigate the death of his friend with calm insight.

The Third Man quickly pulls the rug from under this set-up, however, by making Martins a bad writer and, by extension, a remarkably poor reader of the world around him. Though he repeatedly gains credibility from his stated occupation, in reality the only person in the film who enjoys his work is the kind but rather dim Sgt. Paine (Bernard Lee). The one quality of Martins’ Westerns that characters remark on is their constant need to drum up tension, a characteristic of genre works that Greene’s script simultaneously imitates and pokes fun at (as when Martins gets violently abducted in a taxi that takes him no place more thrilling than a meeting where he has to give a speech).

As an author, then, Holly Martins is little more than the Dean Koontz of his time. Yet his inanity as a writer gets matched by his naïveté as a reader, since, crucially, he buys into the derring-do philosophy he expounds on in his books. Martins follows in a long line of gullible readers that form a particular genealogy of modern anxiety. The two most famous figures in this lineage, Don Quixote and Emma Bovary, cannot distinguish between the lurid fantasies of the worlds they read about in books and the rather harsher life present in the everyday. Don Quixote embodies the comedy of such misreading, while Emma Bovary represents the bland tragedy of the bourgeoisie; both fail to distance themselves adequately from the page.

Martins falls somewhere in between, his misreadings simultaneously comic and tragic. One of Greene’s most consistent themes as a writer is the blundering folly of American empire and its inability to properly translate the world into which it stumbles. Martins not only comes from America; he is America incarnate, the well-intentioned but clueless cowboy firing his six-shooter blindly, only stopping to ask questions after it’s too late. Greene stresses how things get lost in translation by emphasizing Martins’ continual struggles with language, from his inability to communicate with the porter at Lime’s apartment, to his mispronunciation of German names (it’s Vinkel, not Winkel) to his butchering of Major Calloway’s (Trevor Howard) last name (he’s English, not Irish).

Martins’ misreadings also have tragic consequences. His initial misunderstanding stems from his implicit trust in Harry Lime: No old-school chum of his could possibly get involved in anything truly shady. Not until confronted with the evidence of children disfigured by Lime’s black-market penicillin racket does Martins come to accept what the more worldly characters around him already know: that people, confronted with the allure of money, will often choose personal gain over the common good. Even Martins’ switch of perspectives hints at a sharp divide in his mind, common in Westerns, between pure good and pure evil. Lime can only be one or the other for Martins; contrast this with the attitude of Lime’s lover Anna (Alida Valli), who knows the depths of his darkness but cannot ultimately reject him. 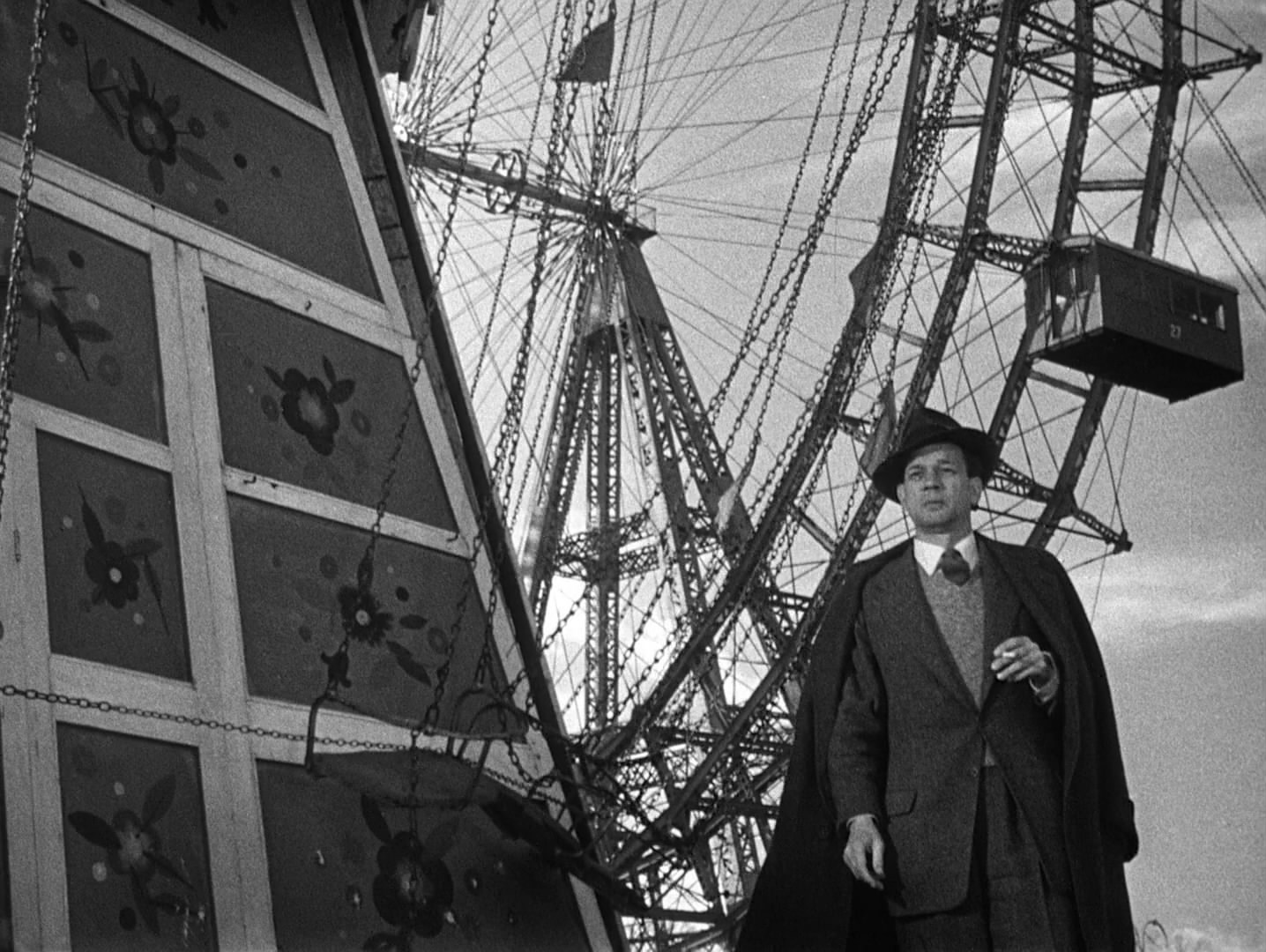 For Martins, life really does operate like the world of The Lone Rider of Santa Fe. On arriving in Vienna and finding his friend dead, he immediately acts to solve the mystery and sets himself against Major Calloway, whom he judges to be a corrupt police officer. For Martins, a clear-cut solution to the mystery must exist, one that will exonerate his friend and bring the real criminals to justice. This “us vs. them” mentality does him no favors in navigating a world where everyone exists as a mixture of selfish and selfless, good and evil. Essentially, Martins lacks the real gift of the novelist: to be able to dissect and interpret the wide array of human behavior that the world presents for study.

In a sense, then, Greene, in The Third Man, seems to be working out a theory of how to live in the world as one with authorial impulses. Crucially, he juxtaposes Martins’ excessive guilelessness with another form of potentially excessive authorship: the dense impenetrability of the modernist novel. After that aforementioned sinister cab ride, Martins has to give a speech at an event organized by a British cultural attache. His topic is supposed to be spirituality in the modern novel, a topic on which he clearly has little insight. At the end of the disastrous, soporific speech, Martins gets asked questions by a rapidly diminishing audience. After admitting that his main artistic influence is prolific Western author Zane Grey, an answer that draws laughs, someone asks Martins, “Where would you place Mr. James Joyce?”

If this seems like an innocuous question, consider that the shadow of Joyce still looms over the first half of the 20th century. Unmatched in his verbal pyrotechnics, Joyce represents a certain strain of modernist writing that places extreme value in the control of the author, the ability to imbue the text with a self-sustaining authority through the power of language. At the same time, this preoccupation seems to preclude any certainty of interpretation. Joyce puts characters like Leopold Bloom beyond the moral, into a world where blankets of language insulate them from real choices (To describe modernism this way is of course to paint with very broad strokes, and the preoccupations of modernist authors certainly vary widely and are influenced by factors like nationality and gender. This caricature, however, at least accurately reflects much of the conversation around modernism, both positive and negative.).

Greene, though writing at the same time as Joyce and other modernists, consciously distances himself from the trappings of a modernist style. Though occasionally elusive and usually elegant, his prose favors the simple over the complex, and his style never draws attention to itself. The polar opposite of Martins’ naïveté, then, is the style so wrapped up in itself that it cannot imagine significant action in the world. Greene deliberately brings Joyce into his script as a signal that, to his mind, neither extreme will do; the author instead must walk the middle way, neither foolish nor too clever.

Harry Lime, in fact, represents the sort of extreme of the modernist text. He talks in a flowery style, far more elegantly than any other character. He views life with an extreme detachment, shown when he takes Holly up in a Ferris wheel and regards the moving figures below as little more than dots. If Martins mistakes humans for ideal representations of good and evil, Lime zooms out too far to see them merely as pieces to be moved around at whim, much like the modernist author sees characters as proxies for the true intent of his or her work, the style. The trick, as Greene repeatedly implies in the script, lies in seeing humans neither as archetypes nor as ants, but as individuals, capable at any moment of great sacrifice or great evil. The Third Man, in its own way, invites its audience to see with the eyes of a novelist, one fully alive to the wonders and terrors of humankind.