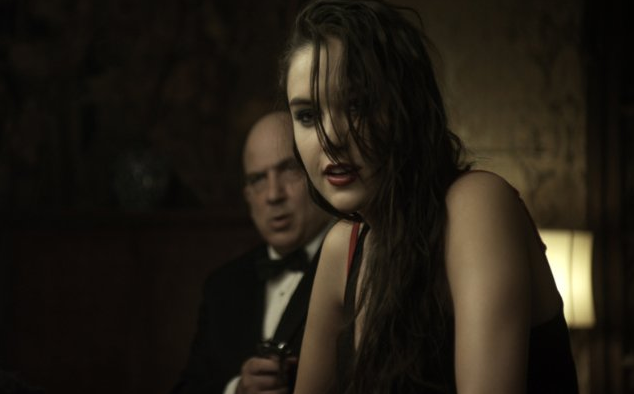 Interview: Sasha Grey On What It Takes To Survive A Horror Film Like Would You Rather

While Grey draws on her sex appeal to play the mysterious Amy in IFC Midnight’s latest psychological thriller Would You Rather, what’s really at the root of her character is her utter ruthlessness. Whereas the other dinner party guests try to help one another and bargain their way out of Shepard Lambrick’s (Jeffrey Combs, who we interviewed a few weeks back) vile plot, Amy attacks the “would you rather” dilemmas with aplomb. This is a woman who means business.

We got to sit down with Grey recently and pick her brain about filming a particularly chilling scene, how she bonded with her co-stars on-set, and what kinds of horror movies she’ll sit through.

Sasha Grey: I really loved the script. One of the first questions I had for [director] David Guy Levy was, “Are you gonna stick to what’s on the page in terms of leaving a lot of things to the imagination, or are you gonna actually show the gore and the horror?” He really wanted to keep it simple and leave things to the audience’s imagination. I really loved that—I loved that I was going to be able to play this vile, repulsve character that was completely against type for what people know me as.

SG: I probably lean more toward classic horror—I named my dog McCreedy, from John Carpenter’s The Thing. I love Eli Roth’s work, and obviously anything Wes Craven does. I’m more of an [Dario] Argento/Carpenter fan. I think in recent memory, the film I liked the most in terms of horror, was Cabin in the Woods, because it makes fun of itself and there were so many nods to different horror films [that] was done in all the right ways. It wasn’t trying to be anything, but it was also trying to pay respects to everything. I joke that it’s the feel good comedy of the year.

NZ: Right? I had so many friends who shied away from it because they said, “Oh, I hate gore” and it killed me that I couldn’t explain to them why this movie wasn’t like that, without spoiling it.

SG: Honestly, the advertising did not draw me in. [I had] no desire to see it whatsoever; I think it was just a late night and I had seen everything else that was out. I was like “eh”… I think I heard a radio interview with somebody about the film and I was like, Oh wow, this does not sound like how they marketed the film. I’m glad I did.

NZ: Let’s talk about Would You Rather and your character Amy. How did you put yourself in the mindset of this desperate woman? She was definitely one of the more antagonistic characters.

SG: I was allowed to create the backstory; it’s something that I went over with with David and made sure that he was OK with. For me, in my mind, her husband drowned her daughter and he’s free; she can’t prove that he killed their daughter. She knows he did it. She’s living in fear, and this [dinner party and Shepard Lambrick’s money] is her only way out.

NZ: How about the part where she asks if she can stab Iris (Brittany Snow) even when it’s not one of the “would you rather” choices? Amy’s got quite a sadistic streak! Is that something you added?

SG: The decision to go ahead and stab the [old] lady next to me without thought—that’s obviously on the page written as-is, but I was really able to work with David — we all were, not just myself — and bring our own takes and nuances to it.

NZ: She very much illustrates the whole notion of “survival of the fittest.”

SG: The snarky stuff, where she kind of laughs, I realized, No, she is that person. Everybody else at the table is trying to help each other out. I just tried to build that part of her up and make her as vile as possible.

Spoilers for Would You Rather!

SG: It was really strange because obviously the barrel wasn’t filled completely; they just had this little partition where it was 20 inches of water. There wasn’t actually a lot of room to go underwater. So a lot of it had to do with how physical his character was and how physical I had to be.

NZ: Did it require a lot of takes?

SG: I think a few, just in terms of blocking and making sure we got everything right.

NZ: Were there ever moments you broke character?

SG: I can’t recall, honestly. I think there were a few moments after they would call cut where someone would say “Ahh!” or “What if that really happened?!” I think when Peter (Rob Wells) has to blow his own hand off with the stick of dynamite, that was intense.

NZ: Did you interact much with Brittany since you were basically the only two women on the set?

SG: Yeah! It was a small set, obviously, and a large cast, so we all we spent a lot of time together. I think we were all very fortunate to have a cast with great chemistry. I can’t imagine it going any other way. We were all able to be light and stay fresh and energized between takes when we were waiting around. You had to build up so much energy on the day and bring a lot to it.

Would You Rather is currently out in theaters and available on OnDemand.