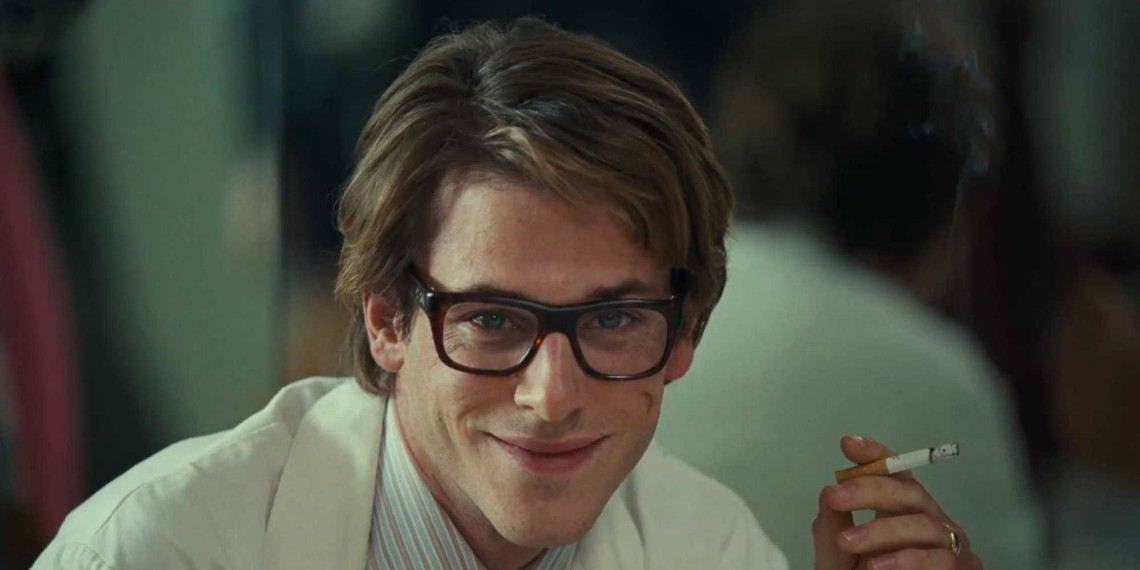 “We are bodies without souls,” the iconic couturier Yves Saint Laurent writes at one point in Bertrand Bonello’s new film, “because the soul is elsewhere.” Where most biopics spend so much energy cramming in narrative detail that their subject eludes them, Saint Laurent acknowledges the essential inability of the form to ever fully “know” a person, relishing instead the mystery of the fashion designer as an enigma that transcended him. Fiercely corporeal, it’s also haunted by something almost otherworldly, observing as a physical existence dissolves into myth, and finally—like some fantasy-movie tagline—a legend.

Unlike Jalil Lespert’s recent, YSL brand-sanctioned Yves Saint Laurent, Bonello’s piece focuses on a specific period in Saint Laurent’s life, dropping in on the designer in the midst of his late-1960s fame before negotiating the subsequent turbulence of his stardom and his celebrated “comeback” show in 1976. When we first meet Saint Laurent (Gaspard Ulliel), he’s already deep in the process of creation, and there’s an immediate, tactile sense of the man at work. Ulliel, himself a former model, plays the character as sensuous but curiously remote, exploring pose and movement rather than interior process. There’s an incredible tracking shot early on, in which Saint Laurent coolly identifies one of his female muses in a nightclub, where the camera’s rhythm and the gesture of the performances conspire to electrifying effect. Bonello isn’t just cataloguing an incident: He evokes both the physical look and the perspective of the “man who loved women,” embodied elsewhere in the film by his relationship to his favorite accoutrement, LouLou de la Falaise (Léa Seydoux). In one of the movie’s best scenes, a stylish but uncertain woman is transformed via his attention to her silhouette, in which Saint Laurent’s intuitive adjustments to her clothes offer a rich sense of his admiration of the female form.

While considerable attention is lavished on the aesthetic of Saint Laurent’s work, the film also delves deep into his personal life: the lovers, the drugs, the inevitable excesses and the melancholy of superstardom. Bonello luxuriates in the wonderfully lurid and immensely tender details of Saint Laurent’s two great loves: his longtime companion Pierre Bergé (Jérémie Renier) and the beautiful interloper (and later Karl Lagerfield accessory) Jacques de Bascher (Louis Garrel), the latter’s explicit orgies drawing parallels between hedonism and artistic abundance. This bacchanalia is exuberant, excessive (Saint Laurent’s poor pooch Moujik performs the all-time greatest canine OD in film history), and revealing, as we watch the designer gradually retreating to the fringes of his own life. Saint Laurent barely seems present in his own business meetings, even as the brand proliferates. “Maybe he’s just a perfume now,” a suit remarks. Saint Laurent’s self-analysis is more pointed: “I’m sick of seeing myself.”

Within this hall of mirrors, Bonello understands the parenthetical nature of time—a continuum of past, present and future that exists in the cinematic moment—and plays with the film’s temporal space to gradually intoxicating effect. In an extended flash-forward to 1989, we encounter the shadowy husk of an older Saint Laurent, a prisoner of his celebrity and hermetically sealed off by his own empire. In interviews, Bonello has likened the designer to a Luchino Visconti character, and he literalizes it here by having the older Saint Laurent played by one of the stars of Visconti’s The Damned, Helmet Berger, who at one point even watches himself in that same film on television. These scenes, sometimes interwoven with glimpses of Saint Laurent’s childhood recollections of his mother in Algeria, move with a disarming fluidity, and the movie’s circular narrative becomes the tomb that entraps him. In cutting between the older man and his younger professional triumphs, Bonello suggests a continuity between past and present and the rebirth that art facilitates.

For all its ample melancholy, Saint Laurent is less a requiem than a celebration— of the man, sure, but moreover the way his art moved in and through time. “Fashion is as fleeting as advertising,” we hear Andy Warhol say to Saint Laurent in voiceover; “that’s what makes it sublime.” Bonello similarly conveys a sense of a world constantly in motion: bodies, colors, fabrics, shapes, the camera just lucky enough to catch a glimpse of their beauty before they vanish forever. Like his House of Pleasures (2011), the filmmaker captures an era in flux, the transition from craft to industry, from an individual to a corporate signifier, an essence to be bottled and marketed. And though the film, shot on gorgeous 35mm by director of photography Josée Deshaies, savors its decadent period details, there’s also something almost hyperreal about the way Bonello has reconstructed the world, as much science-fiction discotheque as Me-Decade glam. The director’s own musical score, often reminiscent of Tangerine Dream, contributes heavily to this not-quite sense of place. When we finally see Saint Laurent unveil his vaunted Spring ’76 line—recreated magically from scratch by costume designer Anaïs Romand —the film has effectively folded in on itself, as though the older man was watching himself on one of his screens from the great beyond.

Saint Laurent understands that the surface is the substance here, that the style is infinitely more important than attempting to comprehend the man behind it, whatever that entails. Bonello pursues beauty and finds it, not in grand pronouncements, psychological guessing or narrative closure, but in accepting that Saint Laurent is unknowable, his creations more important, more revealing, than personal details. It’s there in the film’s final shot, in which Ulliel stares down—and through—the lens, an unreadable smile carved into his chiseled profile. In the words of one observer, he’s become “interplanetary.”