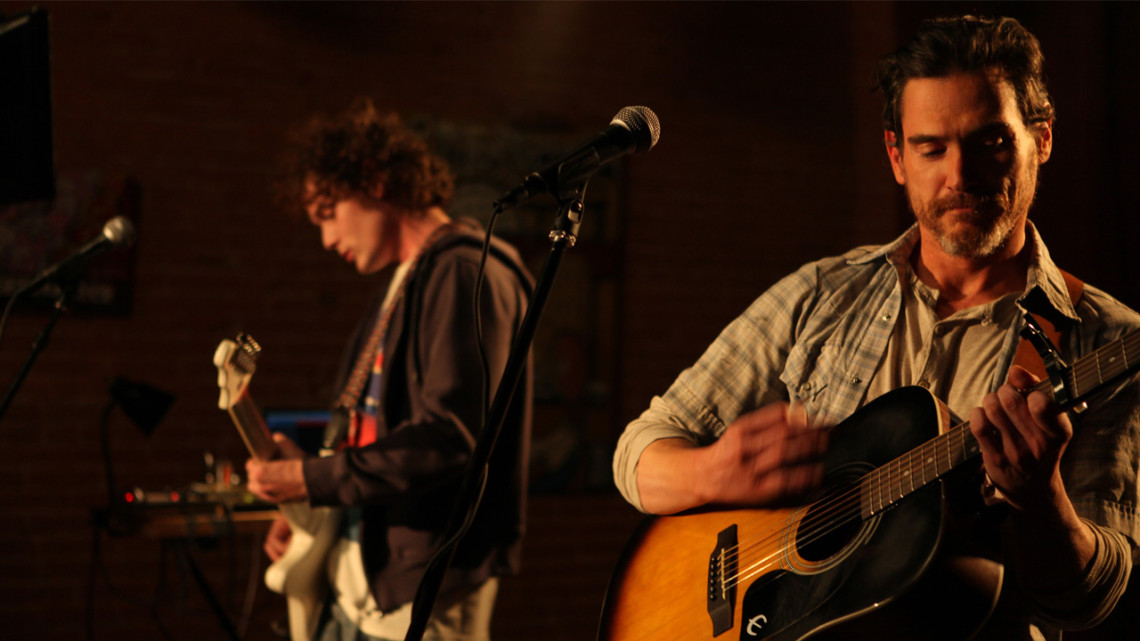 It would be easy and more than a little cruel to make a joke about the aimlessness of a movie called Rudderless, and indeed, there are lengthy sections of the film that feel unmoored. Directed by William H. Macy, helming his first feature, and co-written by Macy, Jeff Robison, and Casey Twenter, Rudderless takes an idea that would make a fine short story and awkwardly stretches it to feature length. But the truth is that Rudderless knows where it wants to go. It just doesn’t know how to get there.

The foundation of the plot is pain. Sam (Billy Crudup), a successful ad man, is at a bar one day when the news breaks in to report a shooting at his son’s college campus. Macy’s wise enough to know that the best way to capture an emotion is to show someone manifesting it in their actions, and that ellipses in the action are easy enough to fill in with atmosphere. So, he keeps things moving briskly through a tense wake at Sam’s house and his subsequent spiral into heavy drinking and forced unemployment. Sam’s son’s death is treated the way tragedies are in real life: suddenly, it defines everything. Two years later, Sam’s living on a boat (and, presumably, with the remains of a severance and investments), sporting a beard, and hiding from everyone he knew.

To exorcise that pain, Sam begins to explore the music his son left behind: notebooks full of lyrics, scattered CDs filled with demo tracks, an old guitar. He gradually drifts into the local open-mic scene and, pressured by a local musician named Quentin (Anton Yelchin), starts to perform his dead son’s songs as his own. (“They just come to me,” he awkwardly demurs when someone asks him about his writing process.) The songs themselves are catchy, roots-flavored numbers reminiscent of Mumford & Sons, and the various performance scenes are among the best in the film. Macy’s got a steady, assured touch for staging the performances as Sam, Quentin, and a couple of other local players form a semi-formal band and start to regularly draw crowds. These moments also work because Macy understands and can gracefully capture the drama manifest in them. Sam is a man finding a way to commune with the memory of his son through shared art and passion. Playing these songs is like bringing him home. The look on Crudup’s face the first time a full band plays one of the boy’s songs is heartbreaking: it has the joy of creation and the endlessly renewed sense of loss bound together.

The first half of the film is modestly enjoyable if slack, the kind of low-stakes story that won’t push the dial one way or the other. Where Rudderless becomes both more interesting and less welcoming, though, is a turning point about halfway through. (What follows might be considered a spoiler, but it’s not possible to discuss the film with any honesty without disclosing it. The last paragraph returns to safe territory.) Sam’s son, it’s revealed, didn’t just die in the campus shooting: he was the gunman. It’s a move that complicates things, but it also winds up calling attention to the subtle but firm manipulations that have come before. Macy’s structured the film so we’re gradually introduced to more of the music as Sam finds local success with it, going from solo acoustic numbers to full-band performances. We’re made to fall in love with it, or at least to relate to Sam’s journey of healing as he goes deeper into the music. The late reveal of Sam’s son’s true identity and deeds, though, winds up making some of the earlier seductions feel a little more dishonest. It seems like a way to stack the deck in the narrative’s favor: we’ve already invested enough time in Sam’s progress that this is meant to be something we process fairly quickly. In other words, Macy keeps us on the outside for too long, then expects us to be grateful for finally being let in. The irony is that Sam is hiding from the truth and doesn’t discuss his past with anyone, and we wind up just as sheltered and, in a way, misled. As experiments go — forcing us into the place of the hypothetical townsfolk who might rebel when finding out what Sam’s son did — it’s interesting; the problem is that it feels to much like an experiment to register as drama. For a story about forgiveness, it’s unusual to leave feeling so clueless.

That said, there are many things about Rudderless that do work in smaller sections. There’s a palpable power in some of the performance scenes, and Crudup is strong enough not to force any one aspect of his slow walk toward some kind of redemption. It would be so easy for him to wail and gnash his teeth, but it feels more honest to watch him take one tiny step at a time: playing songs, writing his own lyrics, wondering if it’s possible to forgive himself for everything he has or hasn’t done. In those moments, however brief, everything lines up.