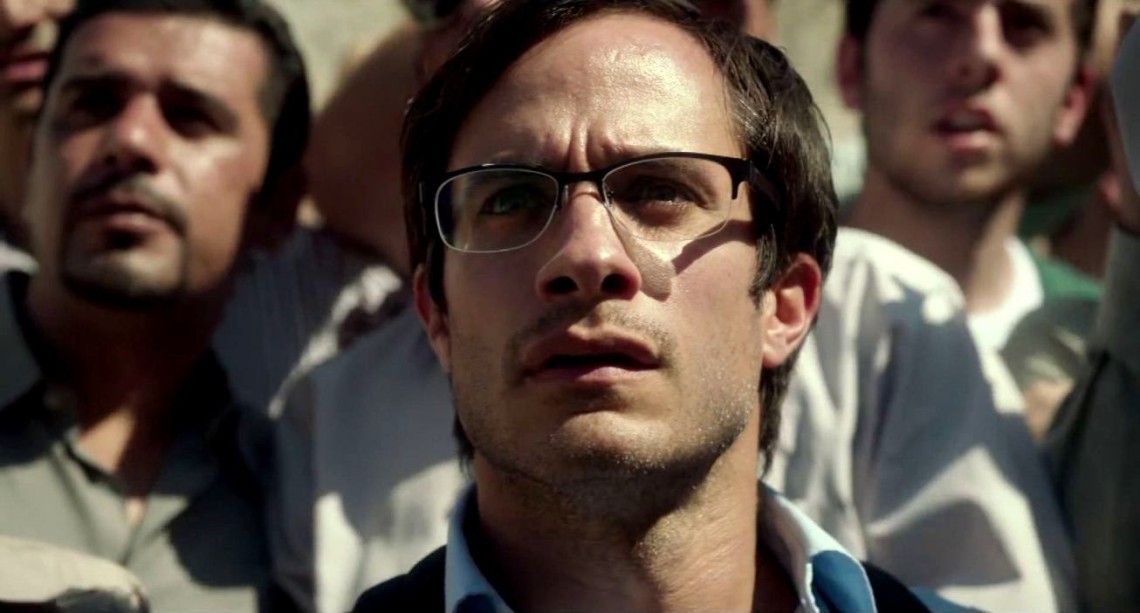 Rosewater is at once everything and nothing like what we expect from The Daily Show host Jon Stewart. The title feels like a political watchword, and the film itself is a furious indictment of governmental oppression and human ignorance. It’s also blisteringly satirical, and often surprisingly funny in the face of its decidedly unamusing subject matter. But Stewart is most often seen operating in these modes in front of television cameras, where he’s playing a role to which he’s well suited in both appearance and wit. In Rosewater, however, he’s behind the lens pulling the strings instead of serving as a personality.

So the film makes for a decidedly lateral move from his TV work, and for the most part, it’s successful. Rosewater lets Stewart do everything he likes to do as an entertainer while taking his image out of the equation; in-jokes and references to The Daily Show aside (and there are several), this is anything but a vanity project. Rosewater borrows from the best-selling 2011 memoir Then They Came For Me, penned by Iranian-Canadian journalist Maziar Bahari as a chronicle of his incarceration during the 2009 Iranian presidential election protests (following Mir-Hossein Mousavi’s defeat at the hands of Mahmoud Ahmadinejad).

The film begins with Bahari’s (an excellent, achingly human Gael García Bernal) arrest before flashing back to cover the week and a half leading up to his internment. He flies to Iran on assignment for Newsweek, performing interviews with supporters of both candidates as he reflects on what the election could mean for his homeland. Then the unthinkable happens – Ahmadinejad wins on the back of suspect voting results, and Tehran erupts into angry rallies. It’s at one such demonstration that Bahari risks filming police attacks on civilians, but his courageous act draws the wrong kind of attention; the morning after, he’s unceremoniously locked up and left to the mercies of his interrogators in Iran’s notorious Evin Prison, robbed at every turn of any hope for release.

Mr. Bahari’s imprisonment lasted 118 days. Stewart’s film distills that brutal length of stay to a cool 100 minutes. He also mines Bahari’s experiences for characteristic humor and warmth. How does one turn a story of physical and psychological torture into something that verges on uplifting? Rosewater does not sugarcoat its uglier elements; Bahari endures barbaric treatment at the hands of his captors, particularly his chief interrogator (Kim Bodnia, depicting the man from whom the film takes its name), who wields the truth against his victims like a blunt force instrument. The mental stress he puts on Bahari is often more horrific than any violence he chooses to inflict. (Rest assured, however, that none of the violence Stewart recreates on the screen here reaches especially graphic heights. These are the scenes in which Stewart feels most uncertain as a filmmaker.)

But Bahari fights back with hope and spirit. He loses himself in chess games he plays with his dead father’s ghost and in dances he choreographs to music only he can hear. He scrawls a message of reassurance on the wall of his cell to buoy the heart of its next occupant. In these moments, Rosewater toes the line between sincerity and self-parody; there are points where the film nearly becomes too insistent, too precious, threatening to undermine its somber through line. (See, also, the representation of tweets flying over the city, a la Chef, in one of modern cinema’s fastest growing visual cliches.) Ultimately, though, Stewart balances comedy nicely against cruelty, and his optimistic direction offers a counterpoint to films like Zero Dark Thirty, Three Kings, Argo, and Syriana. One does not combat totalitarianism through force of arms, but through force of will. If Bahari’s victory over his jailors does not look like much of one, then look again.