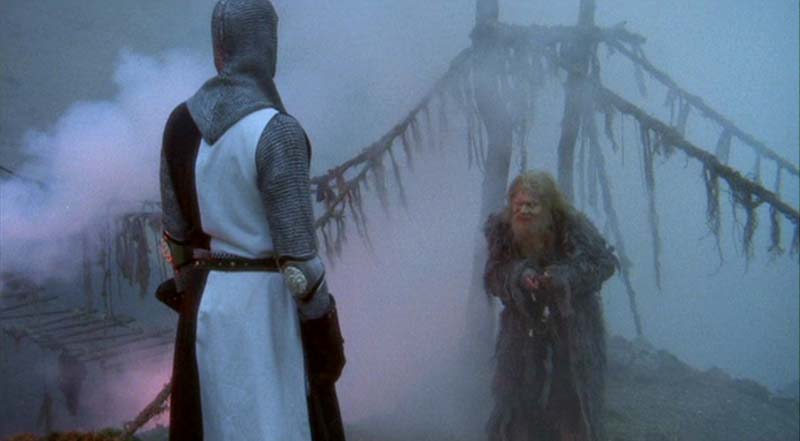 As much as I was into (often inappropriate) older humor as a kid, I wasn’t the only one. After all, what was the fun of watching Mel Brooks if I couldn’t quote the parodied punchlines back at my peers? And in some cases, it was my fellow precocious kids who would tell me about movies I hadn’t yet seen.

I’ll never forget sitting in fourth-grade science class listening to one of the boys regale everyone else with a blow-by-blow retelling of Monty Python and the Holy Grail. I had only a very vague impression of these droll British guys who made random parodies, so I stopped by to listen. I had entered the conversation about partway through the movie, when King Arthur and the rest of the Camelot knights reach the bridge and must answer several difficult questions in order to cross. I giggled along with everyone else as my classmate imitated the old man’s overexaggerated queries:

For some reason, I thought that this inflection was something added by my classmate; it seemed to better match a nine-year-old’s overly exuberant sense of humor than some stiff-upper-lipped Brits. But years later, when I watched Holy Grail, I was somewhat dismayed to realize that my friend had gotten the quote down pat. And watching it on video, it was sucked of any humor:

I think my problem was that my classmate had done such a pitch-perfect imitation, that the real thing seemed like a poor copy. Think about it—yes, we want to get our friends jazzed about the movies and books that excite us. But you have to retain some of the mystery. Why should your buddy shell out for a DVD — or, more likely, an iTunes rental — when you can just act it out for them?

So, I think my first run-through of Holy Grail was tarnished. In my mind, this kid had also “ruined” the infamous bit where Arthur squares off against the Black Knight, with the latter declaring, “‘Tis just a flesh wound!” But I’ve watched the movie a few times since, and realized that there are several key moments for which I was blissfully unspoiled:

Probably best that I got to see the “bad girl, Zut!” part for myself, seeing as it partly inspired my high-school nickname.