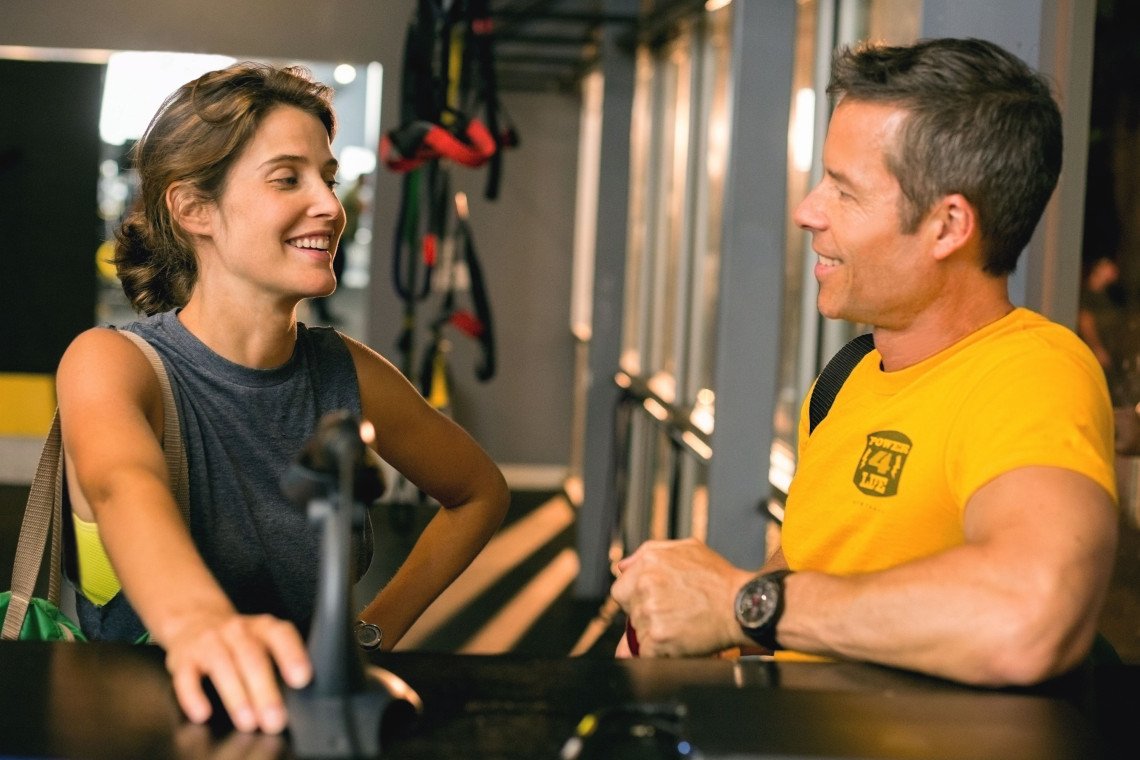 Note. This review originally ran as part of our Atlanta Film Festival coverage.

Computer Chess confirmed Andrew Bujalski as one of the sharpest writers and most inventive directors in the no-budget scene, but just as Joe Swanberg went more conventional with Drinking Buddies, so too does the director head to slicker environs with his new romantic comedy, Results. At first blush, the film marks a radical departure for Bujalski: the production values are higher, the script follows a formulaic pattern, and actual name actors appear in front of his lens.

Gradually, however, the filmmaker’s odd sense of humor and slack pacing win out against convention. Bujalski has an unlikely lead in the great comic character actor Kevin Corrigan, who plays Danny, a working-class schlub suddenly thrust into the 1% thanks to an unexpected inheritance. Corrigan allows the most unflattering portrait of himself to be taken: hunched over with a paunch and ruddy complexion, with his hair styled to look like a burned forest, all charred wisps barely clinging to stripped earth. Danny’s nouveau-riche ineptitude leads him to offer outlandish sums to anyone who can come over and teach him how to operate his new HDTV, but his good fortune also prompts him to reflect sullenly on his recent divorce. To get his mojo back, he decides to hire a personal trainer to slim down.

Corrigan’s sad-sack routine, complete with frequent reveries of tuneless guitar noodling to pass the time, instantly breaks the film of a sense of pace, and his turbulent, unpredictable movements provide a great foil for the disciplinarian realm of fitness. That strictly modulated world is epitomized by Trevor (Guy Pearce), a small-time gym owner who believes in going big with a cockamamie philosophy of wellness that incorporates Wikipedia-grade research into Eastern and Western therapeutic practices and health techniques. Pearce nails the frequently blurred line a gym manager navigates between intimate counselor and sales agent, producing an aggressive optimism that can be read as ingratiatingly sincere or empty flattery.

The film is at its best when it relates to Trevor’s personal and professional ambitions, which he delivers in speech culled from various self-help and entrepreneurial literature. When Trevor gets going, he recalls the programmers of Computer Chess in his obsessive reliance on esoteric, insular professional lingo, and as much as his physical fitness and overriding calm gives the impression of a centered, wise person, the emptiness of his words masks an anxiety and confusion that places him closer to Danny than he’d like to admit. The same is true of Kat (Cobie Smulders), the hot-tempered personal trainer who forms an ambiguous triangle with Danny and Trevor.

The romantic threads of the film never congeal, but the film is at its best when the nominal cliches collapse from sheer inaction into something more dissolute and harder to identify. Bujalski can compress entire personalities into strange, deprecating asides like Danny keeping a brutally honest food diary by taking photo after photo of the pizza he downs by himself, or the hilariously overwrought hype video Trevor cuts for his gym. If the love triangle is lopsided, the three characters align in more equilateral fashion in that their distinctive personalities share a core insecurity of having far surpassed the age at which they should know what they want from life, much less work toward achieving those goals.As he did with his last film, Bujalski takes exaggerated types and, by focusing on their quirks to the point that they become banal and relatable, turns his characters into recognizable humans.

One thought on ““Results””