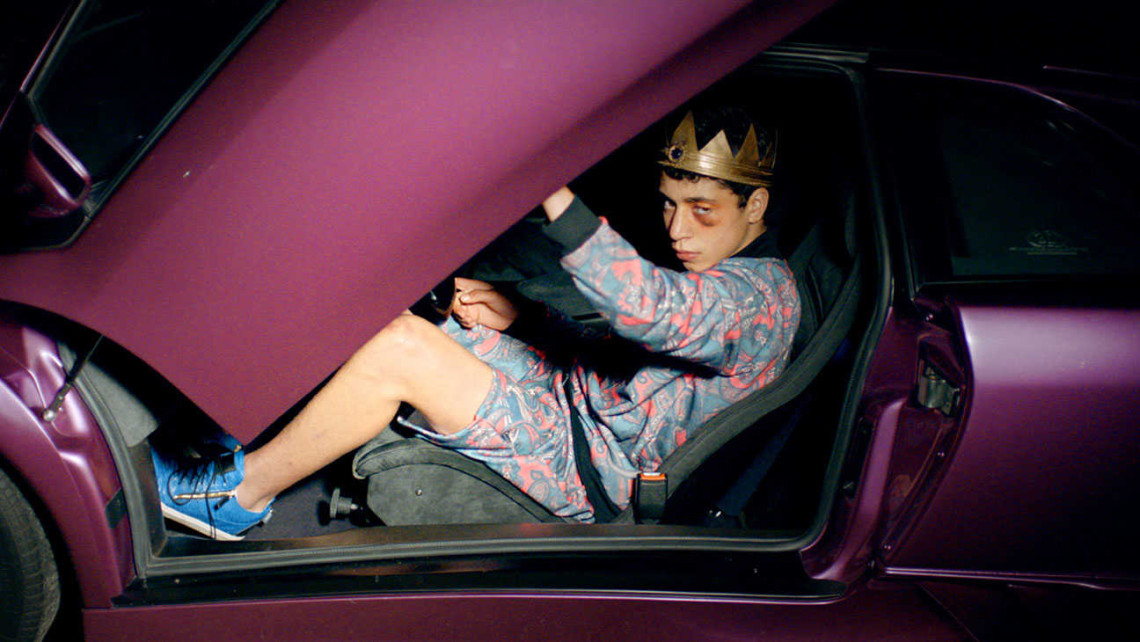 “Prince” Is A Buoyant and Charming Debut

In Holland, first you get the energy drink, then you get the purple Lamborghini, then you get the women—or so it goes in Sam de Jong’s buoyant and charming debut Prince, a familiar coming-of-age scenario energized via the fresh lens of the 28-year-old Dutch music video director.

Set almost exclusively in and around a low-income housing estate in suburban Amsterdam, De Jong’s personal-feeling story follows Ayoub (Ayoub Elasri), a Dutch-Moroccan teenager who spends his time detonating fireworks in trash cans and hanging out on the block with his buds, none of whose brash street talk manages to disguise their essential awkwardness. Ayoub pines for a pretty neighborhood girl, Laura (Sigrid ten Napel), but can’t bring himself to be within 10 feet of talking to her, especially when she’s rolling with a bunch of older hoodrats, a trio of tattooed, menacing hardasses who are the freaks to Ayoub’s geeks.

After an onslaught of full-tilt, neon-type title cards hitched to throbbing electro, De Jong sketches many of these early scenes with neat bursts of flash editing and symmetrical, documentary-like head-on shots, recalling some of the moxie of early Spike Lee and the sympathetic ear of Larry Clark. Jazzed by De Jong’s intergenerational cocktail, composers Palmbomen weave in some curious musical cues among the hard beats, too, like scoring Laura’s whimsical strut to a pan-pipe throwaway that could have come straight from one of David Newman’s ’80s teen soundtracks.

The stylistic shapes aren’t all posturing, however, and scenes back at Ayoub’s family home quickly reveal a deeper set of complications for the young protagonist. Ayoub’s absent dad (Chaib Massaoudi) is a junkie who sleeps in an abandoned swimming pool and hits up his son for cash, leaving his beleagured mother (Elsie de Brauw) to a life of online dating and caring for his sister, Demi (Olivia Lonsdale), with whom Ayoub shares a cramped bedroom and bickers as their hormones escalate. Though it’s not overtly played up, there’s also the tension of looming racial prejudice, and we get the impression that Ayoub’s dad—who might be a first-generation Moroccan transplant—has fallen victim to this. For his part, Ayoub just wants to become the man his father wouldn’t—or couldn’t—be.

What little plot there is derives from this mini-odyssey of manhood, a quest that De Jong successfully lends the air of a fairytale while keeping things grounded in the grit of the urban landscape. Pushed too far by bullies, Ayoub accepts a ride with local crime boss Kalpa (Freddy Tratlehner, a real-life Dutch rapper and designer with a touch of Die Antwoord’s Alien), whose Kismet-esque arrival in a pimped-out Lamborghini and offer—“Here, have an energy drink”—plays like some comical Faustian bargain of modern-day Amsterdam. Precisely what Kalpa’s racket might be isn’t always clear, though: during the movie’s weirdest moment, Ayoub visits his new godfather’s unit to find a live pig being kept for the apparent purpose of making sausages—evidently the new crack for Dutch kids.

Pushed to a denouement, Prince’s narrative takes a predictable turn toward violence, retribution, and that all-purpose standby, the funeral where everyone gets to examine their bottled-up feelings, while the prevalence of thumping synths, shiny bomber jackets and neon hues betrays perhaps too much of a debt to Nicolas Winding Refn (who seems to be the unfortunate new patron saint of every straight, angsty young male auteur). But De Jong’s clean, unpretentious feel for his characters anchors the posing, and by the time we see Ayoub, roughed up but triumphantly wearing his plastic crown and riding a horse, there’s a sense that the director has transcended his influences for something more personal.

Like so many coming-of-age debuts before it, Prince isn’t world-changing, but like the best of them, there’s enough youthful electricity to De Jong’s work to make you want to see what he does next.