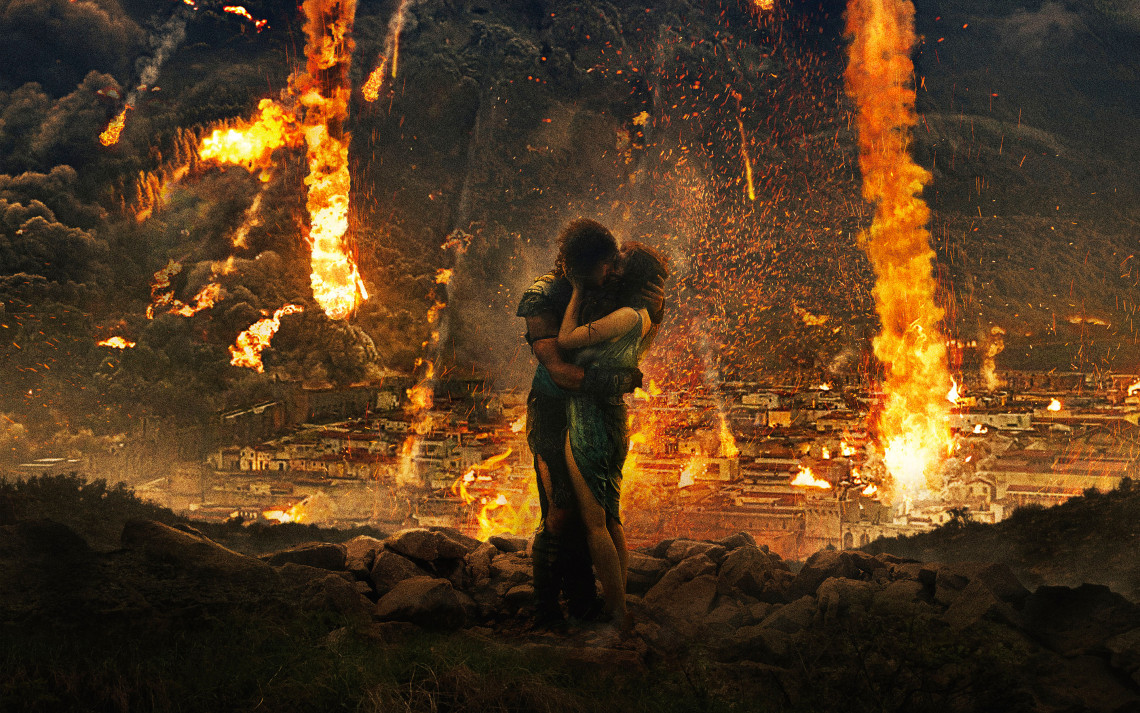 “Pompeii” is a Pyroclastic Flop

If nothing else, Pompeii is so unindicative of Paul W.S. Anderson’s style that it at least confirms he has one. Anderson’s last three features, the fourth and fifth installments of the Resident Evil series and his inexplicable, invigorating take on The Three Musketeers, are absurdities elevated by technical care. Master shots emphasize cavernous backgrounds and their lined proscenia; slow-motion highlights smooth, fluid action framing and cutting; and a sense of whimsy that is not ironic or uncaring but nonetheless aware of the opey, generic quality of the director’s stiff scripts and his adventurous image-making.

Practically none of that is on display with Pompeii, a wearyingly earnest disaster epic that only betrays flashes of Anderson’s cheek at the worst possible moments, injecting individual gags of gallows humor amid the pandemonium of mass extinction and generally inducing unintended laughs for how relentlessly the film remains anchored to its sub-Titanic love story between enslaved gladiator Milo (Kit Harington) and noblewoman Cassia (Emily Browning) even after Vesuvius finally blows its top. Their forbidden love sparks when Milo tends to a wounded horse by gentling bending down and snapping its neck, a macabre show of tenderness that is as close as the film ever comes to acknowledging how ridiculous it is.

Otherwise, Pompeii gets mired in a self-seriousness that does not become Anderson and bogs down the actors in the leaden dialogue of Janet Scott Batchler, Lee Batchler and Michael Robert Johnson. That leaves the actors to their own devices: Harington, whose every look on Game of Thrones communicates a deep sense of perseverance underneath a heartbreaking despair, never brings the same energy to the similar role here. Instead, he twists his face in a childlike scowl meant to convey his loathing of Romans, and in some shots he looks so blank it is as if someone took footage from between takes and put it in the final cut.

Browning fares slightly better as Cassia, who may instantly fall for a slave and generally exist to be rescued but displays a sharp political acumen that could have made her the protagonist of a film set anywhere else in Ancient Rome. (Browning lacks Joan Allen’s committed grit in Drag Race or Milla Jovovich’s sardonic, action-hero superiority in the Resident Evil movies, but her Cassia continues the trend of the most fleshed-out, remotely interesting characters in Anderson’s films being women.) The rest of the cast do what they can, from Kiefer Sutherland’s scenery-chewing as the Roman senator who massacred Milo’s Celtic tribe to Adewale Akinnuoye-Agbaje’s honorable gladiator rival Atticus, who does the best work with the lines by spitting them through clenched teeth.

This motley assembly, collected by chance but revealing their divisions through their various approaches, might have worked given stronger material. But in porting over Titanic’s horror-as-backdrop-for-doomed-love narrative, Pompeii cannot replicate the kismet that made James Cameron’s film, at least from a functional standpoint, work. Titanic’s built-in social stratification, with its compartmentalized class areas, helped join the historical disaster with the imagined romance by directly tying the effects of the sinking to the characters: the kind-hearted, vivaciously vulgar poor among whom Jack takes Rose are the first to die and the ones who die in greatest quantities, while the idle rich established as oblivious and even villainous escape with their lives. But Pompeii’s lack of clear social definition and a sense of senators, commoners and slaves all existing in one great mass, renders its overcooked romance and revenge stories completely irrelevant, even grotesque when set against total destruction.

The best that can be said for the film is that its special effects are spectacular. The relatively lower budgets of Anderson’s blockbusters have led to wildly variable CG quality, but the eruption of Vesuvius may be the single greatest depiction of natural catastrophe the genre has ever given audiences. The film’s last third manages to sustain a constant sense of elevating horror even as the eruption wreaks total, widespread pandemonium from the start: ruining any hopes of escape by sea through earthquakes and tidal waves, sending molten boulders through every section of the city and blacking out the sky in a blizzard of ash. Only when the final wall of superheated tephra comes spilling down the volcano toward the thoroughly devastated city are the mountain’s effects made linear; otherwise, everything collapses at once, removing suspense in favor of simple dread. The final image of the last Resident Evil movie was a Boschian madhouse of monsters converging on humanity’s final bastion, but it is Pompeii that truly feels like a nightmare.

But even beautiful destruction is just destruction, in the end, and the film in every other respect fails to offer anything of value. Anderson’s gorgeous, relaxed establishing shots are few and far between, his eye for modern, angular architecture useless in digitally recreated classical construction. The gladiatorial scenes, shot in jittery close-ups to convey Milo’s almost inhuman speed in combat, replace the director’s capacity for more old-school action for its incomprehensible, contemporary cousin. An opening sprint through expository setup agreeably barrels past the unnecessarily detailed character profiles that riddle blockbusters now, but that ends up leaving the characters so skeletally outlined that their motivations and actions carry no weight. That would work if the film treated its characters as just the ones the camera happened to follow leading up the death of a city, but the dramatic irony hanging over the picture only makes the inadequacy of their positioning as evocative archetypes all the more apparent.