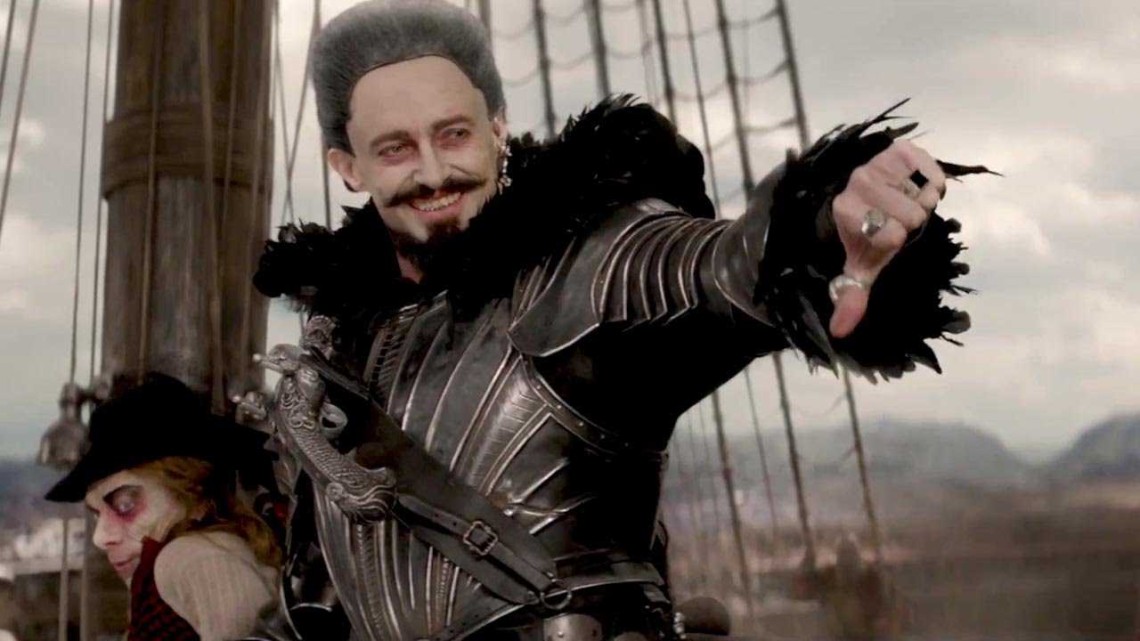 “Pan” Is A Cut Above Other Fantasy Reimaginings

J.M. Barrie’s Peter Pan already had one notorious reimagining in Steven Spielberg’s Hook, and the existence of Joe Wright’s new “prequel” immediately conjures the specter of the dreadful Oz the Great and Powerful: both involve a contrived origin story about the early days of their iconic characters, in this case Peter Pan and his future nemesis Captain Hook, that precisely no one outside the studio accounting department was clamoring for. But Wright actually feels like a great fit for this material, and he may even have found his niche.

Where the director’s dollhouse folderol made a mess of Anna Karenina, Wright’s swooping, expressive camera and taste for baroque visuals swiftly align with Pan, which quickly takes flight with a surprising, coherent confidence in tone. Liberated from “serious” material and abetted by a suitable “Disneyland English” narration, Wright delivers an engaging opening stretch that sees the abandoned Peter (Levi Miller) deposited at a World War II-era London orphanage that’s equal parts Dickens, Jean Vigo, and Harry Potter. In this stylish first act, Wright stages a spectacular aerial fight between British Spitfires and flying pirate galleons that Powell and Pressburger would surely have marveled at.

Once Peter arrives in Neverland—via an ingeniously giddy trip through space-time that recalls Baron Munchausen’s voyage to the moon—the movie gets even better. Or, at the very least, it gets weirder. Presiding over a vertiginous quarry that appears to be on loan from Fury Road, Hugh Jackman lets rip with a cheerfully unsubtle, full-tilt camp performance as the pirate Blackbeard, whose introduction consists of his chanting a singsong version of Nirvana’s “Smells Like Teen Spirit” to his assembled slave underlings. There’s something delightfully disrespectful about it, especially when considering that there really are purists out there boring enough to get upset at this kind of goofiness, and even more so when, apropos of nothing, Blackbeard and his grimy chorus tear into the Ramones’ “Blitzkrieg Bop.” Like, why not? Hugh Jackman huffing fairy dust like some demented children’s book version of Blue Velvet’s Frank Booth? More and more, please.

The sense of irreverence gives Pan some much-needed personality for its genre, and for a good hour or so, the film genuinely feels like anything might happen. There’s some requisite creaky plot business involving Blackbeard’s rivalry with a local warrior tribe and his plans to slave-mine for the precious fairy dust, and there’s the uneasy friendship between Peter and fellow captive James Hook (Garrett Hedlund) to set up for all-important brand recognition. Even so, Pan barrels along with an inventive rhythm and generous servings of old-fashioned adventure-movie banter, with Hedlund in particular determined to make this his two-hour Harrison Ford audition reel (just try and convince yourself that Wright didn’t have Indiana Jones and Star Wars playing on loop in Hedlund’s trailer). As Pan, Miller makes for a suitably wide-eyed and plucky audience surrogate. And Rooney Mara finds just enough to play with in her two-dimensional warrior girl role as Tiger Lily—despite the questionable Coachella headdress, pom-pom dreadlocks and ability to conveniently survive a massacre when all of her indigenous brethren are wiped out.

There’s plenty of swashbuckling, a little derring-do, and an only-occasionally-forced rapport between the leads—with a bellicose Jackman always on hand to pick up any signs of charm deficit. The film’s been keenly designed, too—where films like Oz the Great and Powerful and Tim Burton’s Alice in Wonderland were hurt by their shoddy visual aesthetic, Pan gets it right by evoking a mix of classic literary flourish, chintzy fantasy, and contemporary anachronisms (yeah, Mara’s wearing what seem to be Doc Martins, and she looks great in them, too). One folklore/origin sequence mid-film, told through CG-empowered woodcut animation, is a mini movie-within-a-movie wonder in itself.

Sadly for Pan, the dictates of four-quadrant family appeal, theme park thrills, and selling a franchise vehicle get the better of Wright’s vision. Once the adventure crashes the fairy kingdom, the movie snaps to the tried-and-true template of the loud, faceless finish, and the inspired odd bits—like a lake full of mermaid Cara Delevingnes versus flying crocodiles—become the fleeting exceptions rather than the rule. Pan’s textbook action climax is disappointingly dull, and its cross-cutting duels between pirates and fairy armies are as tiresome as it is inevitable. Worse, much of the actors’ personalities get buried in the noisy effects. You can bet your ass that, as sure as Hedlund is mimicking Han Solo, he’ll also copy the latter’s redemptive arc to a T, while Miller is merely relegated to be another “chosen one” zipping around the sky like it’s a day of Quidditch practice. Even Jackman seems less jazzed by the end, suggesting that the solution, surely, was to include more songs. Yet for some reason—lack of confidence, maybe—the musical angle is completely discarded, which is puzzling considering how well the tunes worked. Hell, Pan might have been a Gonzo masterpiece had it been a musical proper.

Still, the target audience might not be too fussed, in the sense that, as far as holiday movie entertainments go at least, Pan remains a cut above most of the recent fantasy re-imaginings. It’s just a shame that it didn’t have the nerve to follow through on its stranger instincts. Oh well, whatever, Neverland.